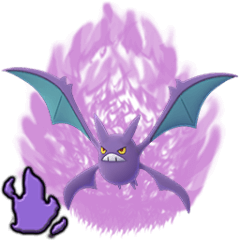 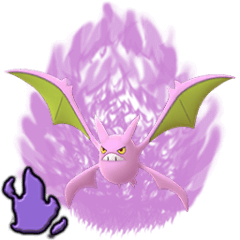 Despite the Shadow Boost, Crobat doesn't obtain the DPS needed to be worth much in raids, and the loss of defense hurts its gym defense viability. While it may look cool, it's not worth the cost.

Air Slash's balanced 3 DPT (Damage Per Turn) and 3 EPT (Energy Per Turn) combines with a STAB bonus and surprisingly good neutral coverage to come out on top in most matchups. Bite lacks STAB and energy gains, but provides strong Dark-type damage which is less likely to be resisted by Pokemon who counter Poison-types.

Shadow Ball is generally recommended due to Crobat's other charge moves sharing the same Poison-typing, and is also useful to threaten Psychic-type counters. Sludge Bomb is strong and gets STAB, but doesn't provide additional coverage. Either Cross Poison or Poison Fang can be chosen as the secondary option for their low energy costs, enabling Crobat to bait shields while providing useful buff or debuff utilities.

The addition of two cheap charge moves with utilities following the GBL Season 8 update gives Crobat more play in Great League. While Crobat is not very tanky and will lose to Steel tanks fairly quickly, the utilities it can provide can help turn battles more favorably. Golbat should still be considered due to its faster energy gains with Wing Attack, but Crobat can fulfill the same role if needed.

Crobat has some nice specialist matchups in the Ultra League, in particular removing Fairy types and Charm users from the field with a powerful, STAB Sludge Bomb. It also has great matchups against anything Grass or Fighting types, in particular invalidating the use of the outstanding moves Counter and Power-Up Punch. However, when not played to its strengths, Crobat is basically made of paper. In order to function it needs support, and it needs to be played for support.

Once again, Crobat is invalidated. Its CP just can't keep up with the juggernauts that clash in the Master League, and its niche is far less important.