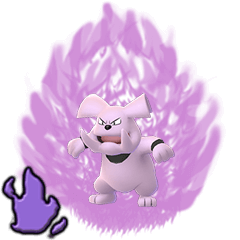 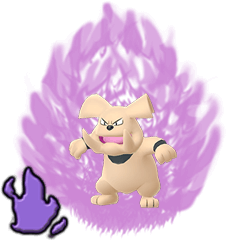 Granbull is a pure Fairy-type Pokemon with a decent ATK stat. It’s outclassed by Gardevoir on offense and isn’t worth considering seriously on defense.

The moveset rebalance on July 9, 2019 gave Granbull a much needed buff with the addition of Charm. Taking advantage of STAB, this allows Granbull to deal very solid Fairy-type damage without relying on its charge moves.

Snarl generates energy very quickly after a more recent update, and gives Granbull an option to rely more on its powerful charged moves, though the low bulk prevents it from doing it very consistently. Play Rough can be viable with this moveset, though it costs the most amount of energy.

As a mono-Fairy Pokemon, Granbull is one of the lucky candidates to obtain Charm to its moveset thanks to the moveset rebalance in July 2019. Unlike other Fairy-types, Granbull distinguishes itself with access to a Dark-type moveset, which gives it interesting niches against Ghost and Psychic-types. Unfortunately the relatively high ATK stat of Granbull provides it relatively poor bulk compared to other picks, and the low energy generation from Charm means it won't be able to utilize its charge moves much. While Snarl lets Granbull use its charge moves much more frequently, Granbull is unlikely able to survive long enough depending on the matchup. Overall an interesting consideration for Great League, but generally speaking some other Fairy-types perform better.

The addition of Charm really boosts Granbull's overall performance in Ultra League, due to its incredible damage output against the meta-defining Giratina. Many Pokemon that act as Giratina's bodyguards also now become easy prey for Granbull. Overall a decent option thanks to Charm, though Granbull doesn't perform as well as other bulkier Fairy-types which hurts its overall rating.

With a max CP of 2552, Granbull falls short of the stats needed to perform well in Master League. The Fairy typing and the Fighting coverage still makes it viable against the many Dragon- and Steel-types which populate this meta.