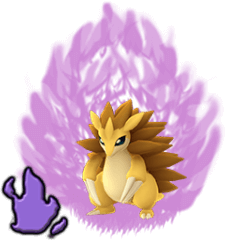 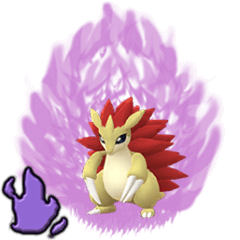 Even with the shadow boost, Sandslash just doesn't do much on offense. Better to find another Ground Type.

Mud Shot is Sandslash's best fast move by far. While its damage output is far from impressive, its incredible energy generation gives it the best chance of leveraging its expensive Charged Moves.

Earthquake and Rock Tomb combine to maximize Sandslash's coverage, and while Rock Tomb isn't a very good move, it's at least better than Bulldoze. The addition of Night Slash following the Sandshrew Community Day in March 2022 is an interesting but somewhat unimpressive one. Dark-type coverage doesn't solve Sandslash's problems, but at least its low energy cost enables faster shield pressure and baiting.

Sandslash? More like Sadslash. Heavily outclassed by other Ground-types (especially Galarian Stunfisk, which has access to Rock Slide over Rock Tomb), Sandslash just isn't worth using. Its new Community Day move Night Slash makes it easier to pressure shields, but isn't enough for Sandslash to challenge most of the meta.

Same story as above, but add even more relevant Pokémon that can do the same thing.

Sandslash is basically a harmless, infant version of Groudon in the Master League.