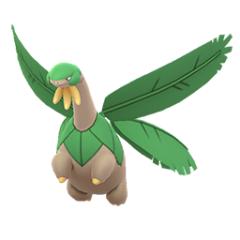 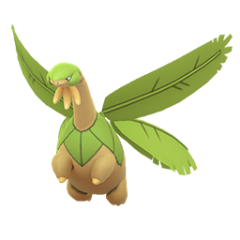 Tropius is not the Exeggutor you were hoping for. It has an okay moveset but cannot survive due to Flying and Grass-type being a particularly vulnerable pair.

Razor Leaf deals incredible amounts of raw damage backed by STAB. This allows Tropius in some cases to KO opponents weak to Grass without pressuring with charge moves, which is important because Razor Leaf is among the worst energy generating moves in the game at only 2.0 EPT (Energy Per Turn).

Leaf Blade solidifies Tropius as the Banana Blade of the Sky and helps clean up fights where the raw damage from Razor Leaf isn't enough. Aerial Ace is not absolutely necessary but does help Tropius with some form of coverage, and also gives it an advantage against other Grass types including the Tropius mirror.

Air Slash leans to more of a balance between damage output and energy generation, and as a result puts a bit more emphasis on Tropius's charge moves. While this moveset makes Tropius less of a hard counter to opponents weak to Grass-type attacks, the extra energy compared to Razor Leaf movesets enables Tropius to win more diverse matchups.

Tropius's claim to fame was during the Silph Arena's Tempest Cup in March 2019, where its rarity as a regional Pokemon became one of the most controversial debates surrounding its use. Regardless, if you have a Tropius and used it, chances are it served you well. Tropius seperates itself from other Grass-type competition through its sub-Flying typing which gives it an advantage against other Grass-types, in addition to possibly having a double Flying moveset. The popular Fighting-types like Medicham also become more favorable for Tropius when running Air Slash. While Tropius does suffer from a double weakness to Ice attacks, its large bulk allows it to even tank an Ice Beam from Azumarill. A strong competitor for best Grass-type in Great League, it's absolutely worth trying to get your hands on a Tropius.

Like in the Ultra League, Tropius doesn't have the stats to perform well in Master League.