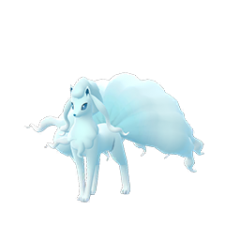 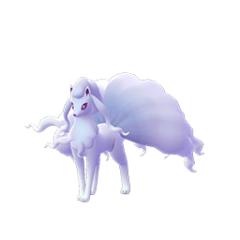 Alolan Ninetales's unique Ice / Fairy typing gives it the distinction of both doubly resisting Dragon and hitting many Dragon-types for double effective damage. However, its attack stat is far too low to be useful in raids, and its low bulk/laundry list of weaknesses make it basically unviable for defense.

Weather Ball (Ice) is recommended for its cheaper energy cost, in addition to its efficient Damage Per Energy (DPE) with STAB. Psyshock is preferred for its lesser energy cost, plus its coverage against the weakness to Poison-types and generally neutral coverage against many Pokemon. Ice Beam is a downgrade from Weather Ball. Dazzling Gleam costs too much energy to be recommended for general use.

Alolan Ninetales sports a unique Fairy/Ice typing, and features decent bulk plus an interesting moveset. Its typing alone gives it perks unlike most other Pokemon, and makes it especially effective against Dragon Pokemon. Access to both Charm and Powder Snow movesets gives A-Ninetales flexible options in its play style, with coverage against different Pokemon depending on what the player requires on their team. Weaknesses to Fire and Rock typings should be considered due to their frequency in the meta, while Poison and Steel-type attacks are less common.

The level 50 update and addition of Weather Ball are significant improvements for Alolan Ninetales, with notable wins against a variety of Pokemon. Losses against Steel-types are to be expected, but Alolan Ninetales stands to challenge most of the meta in a big way. Unfortunately the large resource costs involving XL candy make it rather costly to power up.

Despite the obvious lack of stats needed for Master League, the unique Fairy/Ice typing and moveset is still quite effective against ubiquitous Dragon Pokemon in this league, and Charm in particular can still make quick work of Darkrai due to its fragility. Against most other meta picks however, Alolan Ninetales falls behind.