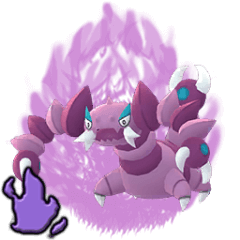 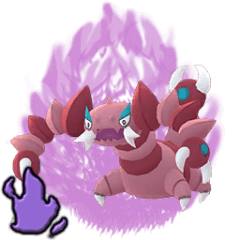 Shadow Drapion has the coveted Shadow Pokemon boost, but it's still not enough to actually make this misbegotten atrocity worth using. At this stage of the game, it seems that absolutely nothing can save Drapion, regardless of what forme it takes.

Bite and Ice Fang both rely on damage output rather than energy generation, with different targets depending on the typing.

That makes Aqua Tail a must as Drapion's most easily reachable charged move (at only 35 Energy). It gets often paired with Fell Stinger which isn't meant to do damage, but rather to double down on the fast move damage by boosting Drapion's Attack by 1 stage at each use. That moveset, however, has the issue of offering very low shield pressure: Crunch and Sludge Bomb will get used less frequently, but when that happens they hit much harder with STAB and may come as surprises.

Poison Sting sports a polar opposite play style with emphasis on high energy gains and weak damage output. This enables Drapion to spam its charge moves much sooner to improve its pressure on shields. Infestation is a step down due to worse energy generation and lacking STAB.

When comparing all of these movesets, one can be more favorable over the other depending on the situation.

Drapion is more of a well-rounded Pokemon; with no highlights of extraordinary stats or epic movesets, Drapion kind of falls in the middle of the pack in Great League. It isn't the only Pokemon with the interesting Dark/Poison typing, which means it has a lot of competition to fulfill its role. What makes Drapion sort of stand out is its larger moveset diversity, which enables it to be more versatile. Among the Dark-types and Poison-types in this league, Drapion's numerous moveset options gives it a lot of flexibility, with options for frequent charge move spam or fast move damage pressure. Unfortunately it's not quite at the level of top tier meta Pokemon, so Drapion tends to see more use in specific formats that cater to its strengths.

The level 50 update increases Drapion's performance in Ultra League, allowing it to reach the 2500 CP cap while increasing its IV optimization for more bulk stats. Dark typing at first glance might seem appealing against the popular Giratina, but Drapion can struggle against Dragon Breath variants even with both Bite and Crunch. Access to Aqua Tail is a great option to deal unresisted damage to other Dark/Poison Pokemon like Skuntank or Alolan Muk, giving Drapion an advantage. Unfortunately Aqua Tail is generally considered a weaker move in the meta, and without STAB Drapion tends to struggle against more neutral matchups.

Drapion doesn't have sufficient stats to perform well in Master League. Most of the wins it will get would be against off-meta picks weak to its typing, which isn't saying much.