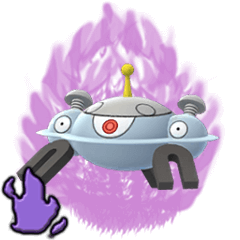 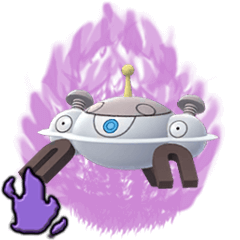 Shadow Magnezone is generally the best TDO option among the Shadow Electric Types thanks to its laundry list of resistances. However, it also sports a very high DPS as well. In many raids, it has the potential to be the best possible option in terms of overall performance. It is definitely worth raising, and will greatly buff any raid team that has it.

Spark performs better than Charge Beam in terms of damage and energy gains.

Wild Charge is the main highlight of Magnezone, dealing out big damage with a very respectable 1.8 DPE (Damage Per Energy). Flash Cannon provides strong Steel-type coverage, but its high energy cost is discouraging. Zap Cannon costs an insane 80 energy to use, which might be too risky considering Magnezone's unexciting bulk. The addition of Mirror Shot from the Dec 11, 2019 rebalance gives Magnezone a low energy charge move that is useful for baiting shields.

Due to Magneton's legacy moves limiting its usability and potential, many people looked to its anticipated evolved form, Magnezone, as an alternative option. Unfortunately, Magnezone doesn't blow away its competition as some people hoped, primarily due to a slower moveset. While it is able to bait shields with Mirror Shot, it can also lose certain matchups if the bait fails. Overall a very considerable pick that easily abuses its typing advantages (which includes an absurd 12 resistances), but can be risky to use against popular meta Pokemon like Galarian Stunfisk. As a side note, Shadow Magnezone tends to be slightly more favorable than regular Magnezone due to the greater KO potential from the increased damage output as a Shadow Pokemon.

Despite performing well against most Pokemon allowed in Ultra League, Magnezone returns mixed results against more popular meta picks, including damning losses against Registeel and Giratina. Formats such as the GBL Premier Cup tend to be more favorable for Magnezone for that reason. Due to its reliance on charge moves for any real damage output, Magnezone's performance decreases dramatically when both shields are in play. Magnezone could potentially be given a higher rating overall, but popular usage of Swampert and increasingly XL Galarian Stunfisk are very scary for Magnezone.

Magnezone has a max CP of 3205, which falls a bit short compared to some legendaries, but isn't that far from the more prestigious fellow Electric-types Zapdos and Raikou. Compared to them, the Steel typing makes it interesting as it's the only one to resist popular Dragons and Fairies, notably being the only one to reliably take down Togekiss. On the other hand, it opens up for weaknesses to the also popular Dialga counters, such as Fighting- and Ground-types.