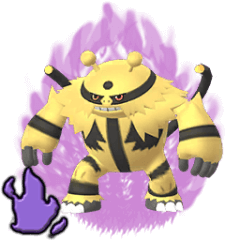 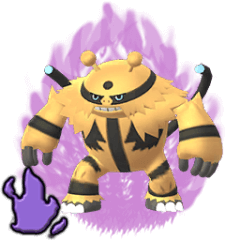 Shadow Electivire is currently the king of the Electric Types. Its DPS is gigantic thanks to its high attack and outstanding moveset, and it's absolutely a supreme counter in any raid that it's Super Effective in. On top of all of this, it's also not a limited Legendary like Shadow Raikou. The main issue is the fact that it's pretty frail, so proper dodging is a huge help to its overall performance.

Thunder Shock is the superior fast move of choice, featuring the fastest energy generation in the game.

Wild Charge is the main charge move for Electivire, which can possibly deal huge STAB damage if unshielded. Either Thunder Punch or Ice Punch are chosen for their lower energy cost, which lets them bait shields. The former benefits from STAB, while the latter offers wide coverage, including against Electivire's weakness to Ground-type foes.

Electivire is a risky Pokemon for Great League, with a high offensive stat distribution, and a powerful moveset. As an Electric-type, Electivire competes among many other Electric-types in this league for a roster slot, and find it difficult to stand out among the crowd. Due to rather poor durability, Electivire is often disregarded as a viable pick, losing roughly 40% of its HP to Altaria's Dragon Breath before it can even use a charge move. While its high ATK stat does make its powerful moves hurt more, the high risk of possibly fainting before dealing significant damage is often too much to ask for. Even Raichu has more bulk than Electivire in this league, which is unfortunate for the furry PvE powerhouse.

Electric-types generally don't have much use in Ultra League, which mostly centers around Giratina. While Ice Punch is a valuable tool against Giratina and other Dragon-types, the lack of bulk prevents Electivire from claiming wins against them.

Electivire is a difficult Pokemon to use in Master League, as its stats aren't anything spectacular compared to the numerous legendary Pokemon in this league. With a poor win rate against top meta picks, Electivire is mostly overshadowed by the much more prevalent Raikou in open Master League. However in specific formats like Premier Cup, Electivire has some room to play thanks to its powerful and wide coverage. Its bulk however, is still a concern.