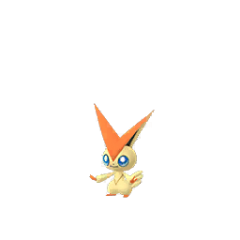 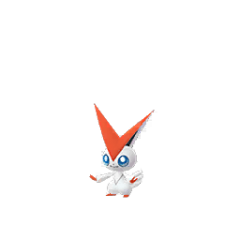 Legend has it that using the Mythical Pokemon Victini will always lead to a sure victory. Sadly, this is not the case in Go. With mediocre attack and a lack of a Fire Type fast move, it's largely pigeon holed into being a Psychic Type attacker, where it has to compete with titans such as Psystrike Mewtwo. It does have V-Create, its absolutely phenomenal Fire Type signature attack, but a lack of fast move synergy and stats just a bit too low to shine hurt Victini's viability badly.

Psychic offers consistent STAB damage, and ties for the least amount of energy needed among Victini's charge moves. V-create is an incredibly powerful and efficient move, and allows consistent damage output without the ATK debuff that hinders Overheat. However the DEF self-debuff also makes it risky to use. Focus Blast avoids the issue of a self-debuff altogether, but 75 energy is a lot to ask for.

Victini sports an interesting Psychic/Fire typing with average bulk, and a somewhat slow but powerful moveset. V-Create gives explosive power if you're willing to risk the defense debuff. However, poor matchups against many of the top meta threats make the Victory Pokémon somewhat hard to use.

Victini's Fire-type coverage is quite valuable in Ultra League where multiple Pokemon are either weak to Fire, or deal resisted damage to Fire. Victini's typing also allows it to resist all of Cresselia's moves, which helps it challenge the meta. Just keep this guy away from Water Pokemon and Giratina.

With a max CP of 3265, Victini would appreciate more stats for Master League. Unfortunately, as a Psychic/Fire it has limited viability in this league due to popular Dragon-types dominating the scene, with not only superior stats, but powerful moves of their own.