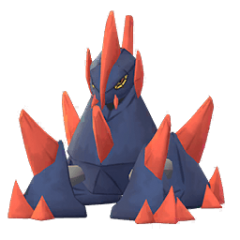 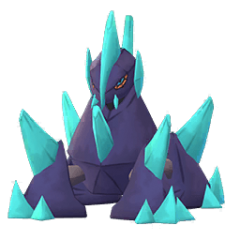 September 2022 was kind to Gigalith. Meteor Beam isn't too much better than Rock Slide, but it is just enough to raise Gigalith to the point where it's competitive with much of the upper echelon of Rock Type attackers. This is a Pokemon worth raising if you need more Rock Type coverage.

Smack Down or Mud Slap + Rock Slide and Superpower

Smack Down is superior to Mud Slap in terms of damage output, not to mention STAB, but the latter offers extra coverage. Both have the same energy generation.

Rock Slide is a strong charge move that gets STAB and offers relevant coverage. Superpower is a bit risky to use due to its self-debuff effects, but its valuable coverage and respectable damage can be worth it if played correctly.

Gigalith as a pure Rock-type Pokemon is quite vulnerable in the meta, which along with its unimpressive bulk, makes it difficult to use. Slow energy generation also limits usage of Gigalith's powerful charge moves, which limits its ability to pressure shields. This causes Gigalith to lose many matchups in the 1-shield scenario, but its high STAB damage output from its fast moves helps flip some potentially negative matchups into wins if given both shields. Overall Gigalith looks a lot cooler than it performs in battle.

Gigalith in a way lives in the shadows of prevalent Steel-types in this league, though it has a niche against opponents such as Fire and Ice Pokemon. It should also be noted that Rock-typing defensively is very vulnerable, and that problem in Great League hasn't left Gigalith in Ultra League either.

A max CP of 3228 is somewhat underwhelming when considering various Pokemon in this league flex superior stats. Rock-typing both offensively and defensively isn't as valuable in this league, where Dragons and Steel-types are ubiquitous. At least Gigalith looks really tough.