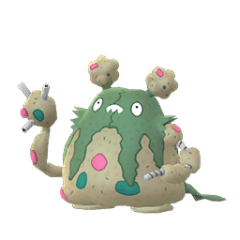 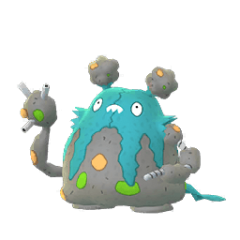 Garbodor reeks of a terrible stench, and is more likely to scare off Stardust investments rather than raid bosses or gym attackers. Pitiful stats and a lackluster moveset prevent Garbodor from being viable in the PvE scene, other than maybe insulting gym attackers with its hilarious trash can animation from Gunk Shot.

Infestation offers fast energy generation, though its damage output is rather lackluster.

Body Slam costs the least amount of energy, sports good damage value, and can be used frequently. Seed Bomb costs 5 energy more and can provide useful Grass-type coverage, but its damage output is somewhat unimpressive. Acid Spray is not recommended due to its more expensive 50 energy cost, though its utility could still be viable during switches. Gunk Shot hits very hard with STAB, though it demands huge amounts of energy to use.

Garbodor is an oddball in PvP, with average bulk, and a horrific odor that might pack more of a punch than its unusual moveset. Access to good energy generation and spammable Body Slam gives Garbodor numerous opportunities to pressure shields, and the potential to hit for big damage in the form of a trash can (AKA Gunk Shot) is downright disrespectful. Unfortunately lacking STAB on both of its fast moves and Body Slam causes Garbodor to be somewhat lackluster in damage output, with various matchups lost if Gunk Shot is shielded. A possible moveset rebalance in the future might enable Garbodor to challenge more of the meta, but for now it's probably better being in the trash can.

Garbodor has a max CP of 2345, which is somewhat inadequate for Ultra League. What holds Garbodor back primarily is its irrelevant moveset, which doesn't threaten much of the meta other than Grass and Fairy-types. Overall a niche pick at best, and not really worth bringing out of the trash bin.

It's probably not a good idea to make dragons mad by throwing a trash can at them.

Wailord on PvP?
I really like Wailord and i have one at 2200 CP. But sadly, it doesn’t perform too …
Is there a way to get the special weekend without verizon?
Hello people Niantic posted about a special weekend and I want some spiffy timed…
Marill Timed Research isn't infinite?
I got the impression it was just like any other timed research, but this happened……
Your opinion on trading pokemon?
What should I keep and used as a trade offer? regual pokmeon with an old year that…
Retro Cup
For those that plan on participating in the Retro Cup what are your thoughts on the…
Read More