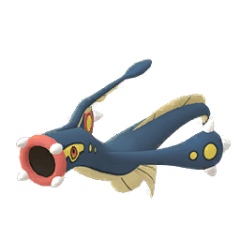 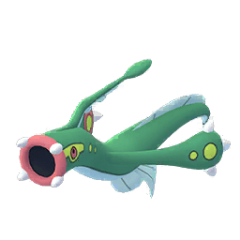 Eelektross looks pretty cool and is an interesting addition to Pokemon Go, but at the time of its release multiple superior Electric-types have already been introduced to the game. While Eelektross is not a bad Pokemon, the fact that there's better existing options makes Eelektross unfortunately not much more valuable than a dex entry.

Spark benefits from STAB and offers good energy generation, while Acid is a below-average move that doesn't synergize well with an Electric Pokemon.

Thunderbolt costs a moderate amount of energy and benefits from STAB to deal respectable damage. Dragon Claw can be chosen for its cheap energy cost, useful for baiting shields and dealing relatively neutral damage for when its Electric-type moves would be resisted. Crunch fills a similar role, though it demands more energy and provides Dark-type coverage instead. Acid Spray provides an interesting debuff utility, but its moderate energy cost is unappealing compared to cheaper charge moves.

At the time of its introduction into Pokemon Go, Eelektross sits at a rather awkward moment. As an Electric-type, its poor bulk and unimpressive moveset doesn't let it stand out among the Electric-types already in the meta. Pokemon with stronger moves like Volt Switch, the faster Thunder Shock, Thunder Punch, or Discharge, and the powerful Wild Charge all boast superior performances. Lanturn offers a similar but slower moveset but has considerably more bulk, Galvantula has a debuff utility with Lunge, and others have coverage options with Grass Knot to pressure Ground-type counters. Eelektross may show up as the new kid on the block, and can fulfill an Electric-type role if given the opportunity, but it's got some catching up to do to surpass existing Electric Pokemon.

Eelektross has interesting plays in Ultra League with access to Dragon Claw or Crunch, though it struggles against Dragonite and loses to Giratina due to its poor bulk and lack of STAB on its coverage moves. Electric-type competitors in this league like Galvantula, Ampharos, or Magnezone typically are favored over Eelektross, but it doesn't mean this eel can't fulfill its Electric-type role.

Eelektross lacks stats for Master League. While it can claim wins against Gyarados and a small handful of other niche matchups, other Pokemon can perform much more comfortably in this league.