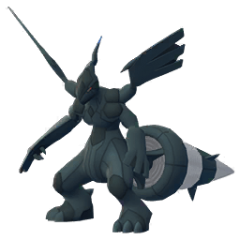 The Deep Black Pokemon, the Dragon of Ideals, and the mascot of Pokemon White; Zekrom is a fan-favorite Pokemon that had a lot of anticipation leading up to its initial release. Zekrom is one of those Pokemon that has fantastic role-compression, especially for newer players, as it makes an outstanding Dragon Type attacker and one of the best non-shadow Electric Types attacker in the game. This Pokemon has genuine utility for new and old players alike, and should definitely be a priority Pokemon for many players looking to shore up holes in their raid roster.

The release of Zekrom's signature move, Fusion Bolt, on January 2023 gives Zekrom a slight buff as an Electric attacker, but not significantly. Players who miss out on this window can still perform just fine with Wild Charge.

Dragon Breath benefits from STAB and sports high damage output with average energy generation. Charge Beam generates energy faster, but the trade off in damage output is not worth it.

Fusion Bolt is an excellent and safe STAB move, tying for the least amount of energy among Zekrom's Charged Attacks. Wild Charge is even stronger for the same cost, but the self-debuff can make it tricky to use; it is still a viable choice over Fusion Bolt for the increased damage alone. Crunch is a safe choice - it can act as a shield-bait option to avoid any issues with self-debuffs, and can threaten a Defense debuff to further strengthen Dragon Breath's damage. It is not particularly strong, however, but it often does enough damage to complement Dragon Breath, and is Zekrom's best option at cheaply pressuring Ground-type opponents. Outrage costs more energy to use, gets STAB, and hits hard, but its coverage may be a bit redundant, and is only useful when shields are down. Flash Cannon can be used to land a surprise burst damage on Zacian and Xerneas, but it has underwhelming DPE and is extremely expensive for more practical uses.

Generally speaking, Fusion Bolt is the overall superior Electric Charged Attack choice when Zekrom utilizes Outrage or the niche Flash Cannon as its secondary attack due to its safety and reliability. Wild Charge's extra power may be appealing if Crunch is used, as Crunch already provides Zekrom with a safe attack.

Zekrom's CP is too high to be eligible for Great League.

Zekrom's high ATK stat results in significantly less bulk compared to many meta picks in this league. While it may struggle to compete in this league, its powerful charge moves are still threatening enough that they demand shields or risk dealing massive damage.

Zekrom is one of Master League's most fearsome closers, sporting the exact same stats as Dialga and an almost unresisted Dragon/Electric STAB combination, backed by powerful moves in Dragon Breath, Fusion Bolt, Wild Charge, and Outrage. Zekrom separates itself from the ubiquitous Dialga by having a superior matchup against Melmetal, Ho-Oh, Landorus-T, and Yveltal due to a combination of faster charge moves and lack of Fighting-type weakness. It also fulfills its Dragon-type duty by keeping Kyogre and Giratina-O in check.

There is very little that Zekrom cannot break when shields are down, but it has its fair share of answers if shields are still up. Togekiss completely walls Zekrom if it cannot land a Wild Charge or Fusion Bolt, and Dialga destroys it if it cannot land an Outrage. Excadrill also resists its STABs and destroys it with Drill Run. Groudon, Zacian, Landorus-I, and Mamoswine are other problems that Zekrom has to contend with, although the appropriate charge moves can deal heavy damage to all of them.