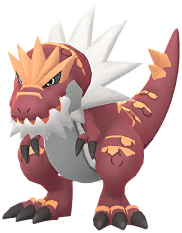 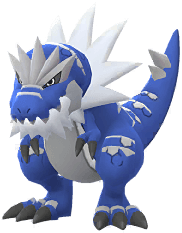 Tyrantrum has an aggressive appearance with a very notable shiny variant. Its interesting Dragon/Rock typing is relatively unique, but unfortunately its stats are somewhat lackluster behind existing PvE meta Pokemon like Rayquaza, Dragonite, Salamence, Garchomp, Zekrom, Rampardos, Rhyperior, or Tyranitar. Being weak to Fighting-types doesn't make it viable for gym defense either.

Dragon Tail is recommended for its impressive STAB performance, as well as the highest energy generation among Tyrantrum's available Fast Moves. Charm offers strong damage output, but lacks STAB, and its slow energy gains are discouraging. Rock Throw is an alternative choice that gives Tyrantrum specific coverage at the cost of energy generation.

Crunch costs the least amount of energy, and enables Tyrantrum to more comfortably pressure shields. Stone Edge benefits from STAB to deal significant damage, though it has a moderately high energy cost. Earthquake is very similar: high damage, high energy cost, wide coverage. Outrage is a bit redundant if Dragon Tail is chosen as the Fast Move, but is still a strong option thanks to STAB, with a pretty high energy cost as well.  It is not advisable to disregard Crunch for two high damage Charge Moves, due to the lack of shield pressure.

Tyrantrum is a unique Dragon/Rock Pokemon with high offensive power, but lackluster in almost every other aspect. Its high ATK stat results in unimpressive bulk in a CP capped league, and its defensive typing is not very synergistic to cover its weaknesses. Speaking of which, Tyrantrum's six weaknesses to relatively common typings is further discouraging, increasing the risk that Tyrantrum will run into unfavorable matchups. This Pokemon will only find a niche in very specific PvP formats such as Silph Arena or Go Battle League cups, but at least it looks awesome.

Tyrantrum's coverage options can be somewhat useful in this league, though its fragility and vulnerabilities still hold it back by a wide margin. It's generally recommended to consider other Pokemon in the current state of the meta.

Despite its aggressive appearance, Tyrantrum falls behind in Master League primarily through its lack of stats compared to various meta Pokemon. Its vulnerable typing and unimpressive shield pressure can cause it to lose to faster opponents like Dragonite or Swampert, and its fastest moveset does it no favors against common Fairy Pokemon. Overall Tyrantrum's performance is very unfortunate, but a possible moveset update in the future could allow it to challenge the meta.