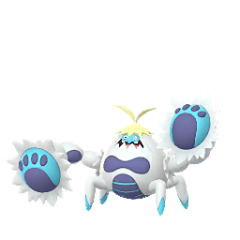 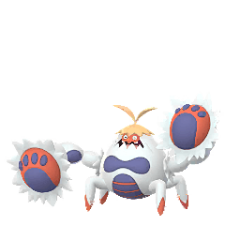 Crabominable is the ultimate abomination of bad moves and typings thrown together. Like, WHAT IS THIS THING GOOD FOR?? Nothing makes sense for Crabominable's profile in Pokemon Go, and the fact that it requires a Glacial Lure for even its Dex entry is criminal.

Bubble offers above average energy generation, though its damage output is less impressive without STAB. Rock Smash is a poor move for PvP, even with STAB.

Crabominable awkwardly doesn't hit as hard with Crabhammer as other crustacean Pokemon do, due to the lack of STAB, however its moderate energy cost makes it a decent choice. Ice Punch benefits from STAB and can be used often to provide useful coverage. Payback helps to cover Crabominable's weakness to Psychic-type Pokemon, as well as its largely neutral damage against many Pokemon.

Power-Up Punch is only useful to ramp up damage for Rock Smash (since damage from Bubble is somewhat poor), but this is a very inflexible strategy that does not generate enough energy for coverage options.

Crabominable is a crustacean Pokemon with a Fighting/Ice typing, which is very vulnerable defensively. The lack of strong Fighting-type moves is a major drawback for this Pokemon as a Fighting-type, in addition to the severe lack of STAB move options. A high ATK stat results in poor bulk in a league that caps CP, making this Pokemon unviable.

It's best to consider other Pokemon that have better stats, typing, and movesets.

At least Crabominable can beat Rhyperior and Mamoswine. To be fair, so can many other Pokemon with typing advantages.