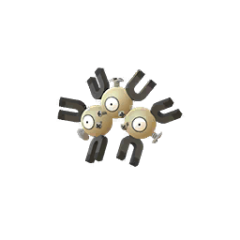 Magneton has a nifty typing with 12 resistances that sadly cannot compensate for its bad defensive stats. It can function as an Electric-type attacker, with high Atk and passable moves, but Magneton will more likely be sitting on the bench, waiting for Gen 4 to roll around so that it can evolve and fix its problems.

This is the most popular moveset for Magneton, and it's finally not legacy anymore. Thunder Shock is the best fast move due to its superior energy generation.

Magneton is a niche pick, sporting poor bulk, a typing that offers 12 resistances, and a good moveset. Known for its high offensive power and low durability, Magneton doesn't see much use in open formats due to its squishyness. Restricted formats where dominant meta picks are limited decreases the amount of threats against Magneton and gives it opportunities to shine. A controversy surrounding Magneton is towards its legacy movesets, two of which are legacy. While Discharge isn't absolutely mandatory for Magneton to perform well, Thunder Shock is a notable increase in performance due to faster access to Magneton's hard-hitting charge moves. Overall Magneton isn't a must-have to do well in PvP, and if anything its evolved form Magnezone can also be serviceable with slightly better bulk and access to Wild Charge.

Magneton is a risky pick for Ultra League, featuring one of the worst overall stat products in this league among meta Pokemon due to its high Attack stat and poor bulk. Unfortunately Giratina and its Fighting-type escorts easily dispose of Magneton, which limits its overall use.

With a max CP of 2485, Magneton has few opportunities in Master League. Consider its evolved form, Magnezone, instead.

HELP! I cant battle Giovanni
Hi. First time posting here because I need some help. I battled Giovanni once when he…
Have lucky trade chances been nerfed?
Hi all, I know the chances of a trade becoming lucky is 5%. Recently though I have…
Victory and Deafeat Avatar Animation Frozen
Everytime weather I win or loose a battle my avatar dousnt its anamation. I tried to…
Is GBL down or something?
I have zero connectivity to GBL. Clear skies and full data, but no connection. Is this…
Halloween Cup team building
Has anyone started thinking about this yet? Currently my plan is either lead…
Read More