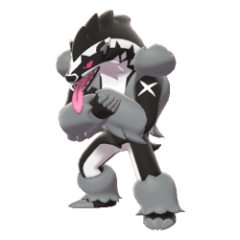 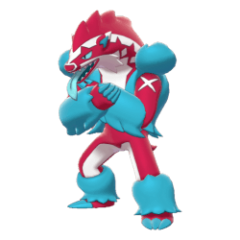 Despite its wild outward appearance, Obstagoon is not really worth raising in PvE. Its stats aren't great, it lacks a STAB fast move, and it falls like a house of cards against any Fighting Type coverage that the enemy may have up its sleeve. Its only real claim to fame is a triple resistance to Ghost, but even that doesn't make it an impressive choice.

Counter is one of the best fast moves in the game, and is superior to Lick in terms of damage output, energy generation, and coverage.

Night Slash takes advantage of STAB to provide consistent damage, and has a small chance to boost Obstagoon's ATK. Cross Chop can be chosen for its cheap energy cost and useful coverage. Gunk Shot costs large amounts of energy, but is the only option available to threaten Obstagoon's weakness to Fairy-types.

Obstagoon as a Normal/Dark sports respectable bulk and moveset that's fast and relevant in the meta. Unfortunately the lack of STAB on its Fighting-type moveset, in addition to being doubly weak to Fighting-type attacks, makes it a risky choice to fight the common Registeel. In addition, the lack of a reliable answer to its weakness to Fairy-types, including the ubiquitous Azumarill, can also make it more difficult to use in the open meta.

Obstagoon's coverage and typing suggest it would be viable as an anti-meta pick for Ultra League, but being risky against Registeel and losing to Giratina-Altered with Dragon Breath is quite underwhelming. Obstagoon can opt for Lick to have a much more solid answer against any Giratina variant, though it gives up coverage in this role, which other Pokemon can fulfill more optimally.

With a max CP of 2652, Obstagoon lacks sufficient stats for Master League.