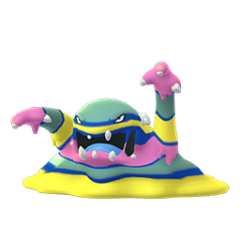 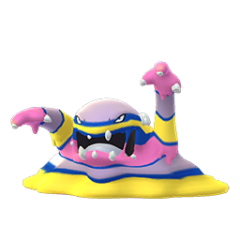 Alolan Muk gained a Dark typing and psychedelic colors over its prolonged separation from Kanto, but what did it gain in Pokemon GO viability? Not a whole lot. Its attack is too low to be a great choice in raids, and its fairly low bulk makes it a less than ideal choice for defense despite the fact that Ground is its only weakness.

This is Alolan Muk's best, most generally useful moveset. Snarl's great energy generation allows it to leverage a fairly expensive set of charged moves with very solid coverage. Dark Pulse is mandatory as A-Muk's Dark-type move. Sludge Wave and Gunk Shot are both totally viable options for your secondary. Sludge Wave's lower energy cost can make it a little less punishing if it gets shielded, though Gunk Shot's stronger if it lands (and also has a funny trash can animation).

Acid Spray is a bit of a meme move, rendering this kinda a meme set. If you do want to run Acid Spray, it functions best with Poison Jab, allowing you to leverage PJ's higher damage output. Dark Pulse remains mandatory.

Passable bulk, a single weakness to Ground, and great neutral coverage make Alolan Muk a totally solid choice in the Great League format. Not much actually walls it out, and it has pretty good matchups against many of the top Pokémon in the format! It's not, and likely never will be, top tier, but that doesn't stop it from being perfectly usable a lot of the time.

Unlike in Great League where A-Muk is "pretty okay," it's actually a threat to be reckoned with in Ultra League. With winning matchups against both Giratina-Altered and Cresselia, it's easy to see why. Do note that its matchup against Charm users is iffy, often requiring you to bait before landing a game-winning Sludge Wave or Gunk Shot.

Alolan Muk just doesn't cut it in Master League, as its max CP is too low.