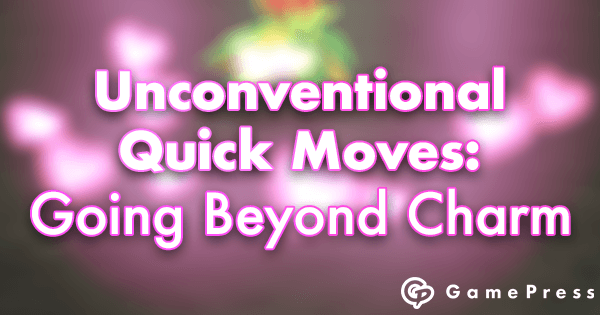 The Implications of Charm

On July 9, Niantic announced that they would be shaking up movesets and adding new moves to the game. Many Pokemon received better move options and several PVP-centric changes were made across the board. However, one large change took center-stage: we were finally given a Fairy-type Quick Move in the form of Charm. While many of us knew of this move’s existence months in advance due to its appearance in the game’s Master file, it was still a very exciting move for several reasons, and it’s opened the door to what could be a very interesting future for movesets.

The exact stats for Charm can be viewed here, but here is a break-down of its actual performance:

Charm is basically a near-clone of Confusion. It has higher DPS due to finishing off slightly faster, but lower energy gain. It’s actually a very good move for attackers, and one of the best moves on gym defense possible.

Charm has a huge 5.33 Damage Per Turn, but a low 2 Energy Per Turn, meaning its best use is alongside low-energy-cost moves. Its pure damage is second only to the stellar Razor leaf, making it a very good though somewhat unwieldy attack.

The Effects of Charm on PvE/PvP

Why is the addition of Charm such a big deal? To begin with, let’s look at what it’s already done for the two main branches of gameplay: PVE (Player vs. Enemy) and PVP (Player vs. Player):

For years now, Fairy has been a potentially fantastic yet effectively unrepresented type. It has the single best possible type-matchup against the super-relevant Dragon-type and it resists and deals super-effective damage to both Dark and Fighting types. The lack of a Fairy-type Fast move was the one issue, as it left Fairy type out of the loop for pretty much any Raid. And then we received Charm. Despite what some might have expected, Charm didn’t actually turn the meta on its head; its best user is Gardevoir, but it still doesn’t take the top spot against Dragons in particular. It’s finally on the map, but in this DPS-centric metagame, Rayquaza still beats it by a mile. If the addition of Charm had any effect on PVE, then it’s best summed up as “more options”, which is always good.

In a system that focuses far more on TDO, fluid type-matchups, and stat balances, Charm definitely made more waves here.  The prime user of the move at this early stage is Wigglytuff in the Great League, where its unique and hard to counter typing combined with the narrowly-resisted power of Fairy types has definitely caused players to take notice. In this regard, Charm has made a slight shift to the system as Steel and Poison types are now more reliable choices than before while the otherwise near-unresisted Dragon type is a bit riskier to run.  Otherwise outstanding Pokemon such as Medicham also have better counter-play now and must rely on their team-mates a little more. Charm may not be earth-moving, but it’s definitely caused a few small quakes that players are still settling into.

While Charm is a great asset to the game in-and-of-itself, it also has some far-reaching implications as it’s the first move added to the game that doesn’t deal damage in the main series, with the exception of moves like Splash and Yawn. In fact, its only real effect in the main series is lowering the target’s attack stat.  Charm’s real benefit to the game can be summed up in two words: more options. We can now look at more than just damaging moves when theorycrafting the future for a given Pokemon. This could allow Niantic to tailor moves to specific Pokemon to a greater degree, and if managed right, it can lead to a better balance moving forward.

Following the logic set by Charm, the following is a list of other potential moves from the main series that lower the opponent’s stats without dealing damage. Other moves that work slightly differently could fall into this general category, such as Swagger, Taunt, or Roar, but the point of this list is to follow the existing logic set by Niantic:

Some moves obviously have more potential to see counterparts in Go than others, as moves like “Baby Doll Eyes” seem less likely than moves like “Venom Drench”, but they’re all now at least possible given Niantic’s new precedent.

The Effects of New Moves on PVE

In the PVE meta, the lack of variables leads to heavy centralization. In raids, you always know what you’re going to fight, with the only variables being weather and moveset, both of which can be planned for easily. In gyms, you always see what you’re going to fight and can plan accordingly. Because of this, we always see “Supreme” choices on our raid graphics and tier lists. Pokemon that rule their niches, and are generally considered the best choice regardless. It’s rare to see a raid where more than two or three Pokemon are considered “Supreme Counters”  with each having a unique reason that allows it to be virtually equal to its contemporaries; we pretty much always see one top Pokemon with other great choices below it. So how can we fix this? With more moves. Adding more moves to the pool and targeting Pokemon that need a boost can help level the playing field a bit, which makes the system less stale. We’ll still have Pokemon that reign in a given matchup, but more options could be made perfectly viable with this.

The Effects of New Moves on PVP

Honestly, this is where the implications of this entire ordeal really shine. PVP has a true “Metagame” active, where a change to one Pokemon for better or for worse can have a cascading effect across the rest of the meta. To compound this, move choices tend to be fairly static; most Pokemon are only known for one specific set, leaving the outcome of a fight fairly well pre-determined when said Pokemon hits the field. With more moves, more possibilities will open up, creating a more fluid and diverse system moving forward. The one potential issue here is the ever-present threat of power creep, like we saw when Medicham learned Power Up Punch for the Great League meta. However, if managed properly, this could open the field for a healthier metagame moving forward.

Pokemon That Could Benefit

Because Charm was released as a Quick Move, we will assume that any other moves added along these lines will also be Quick Moves. It’s entirely possible that they could be Charge Moves in the future, but as of now, we have a system precedent to work from. Potential STAB moves will be in bold. One fact worth noting is that Charm was likely chosen as Gardevoir, in particular, had no other Quick Move options. The Pokemon below are not the only ones that would benefit from the moves above, but they do have this same problem as Gardevoir to a lesser degree. They may have other options available, but adding a new Quick Move in the form of one of these moves would allow Niantic to potentially tailor-fit the move to what’s needed.

No list of Pokemon that would benefit from a new Quick Move would be complete without Slaking. Held back exclusively by Yawn, Slaking could see use in both the PVP and PVE metas if given a new move. Even with a “bad” quick move, it could at the very least leverage its huge stats to be something better than a lump on a log. However, all three of these moves feel a bit too awkward for a Slaking to use….

While not a good Pokemon by any metric in PVE, Weezing does have some potential in the Great League thanks to its good bulk and defensive typing. It also has some great moves like Thunderbolt, Sludge Bomb, and Shadow Ball in its arsenal. However, where it’s really held back is its terrible set of Quick Moves. This is all because it truly doesn’t have any other existing options in the main series games. While it does have appropriate moves such as Smog in the main series that would translate well and fit its theme, non-damaging moves like Venom Drench could work very well, though Smokescreen has the potential to be truly stand-out as a fantastic fit if focused on energy generation, as it would give Weezing good neutral coverage that isn’t as hindered offensively as Poison and a way to get off its great arsenal of Charged Moves quickly.

How likely are these moves to see use in Go? In most cases, not terribly. However, it is an exciting new precedent from Niantic that we can now expound on. We’ve seen another standard broken, meaning we could very well see even more from these changes, or go even farther than this with still other moves that we’ve never truly considered. Regardless of how the wind blows for Pokemon Go’s moveset options, one thing is for certain; our game is still growing, and it still has room to grow!