A great Co-op Support with its powerful Self Buffs and ability to transfer them to its teammates, but this set of skills is not nearly as useful in Single Player. However, it is still a highly useful healer in Battle Villa with its spammable One Bar Tackle, multiple Potions, and occasionally match-stealing Sync Move. 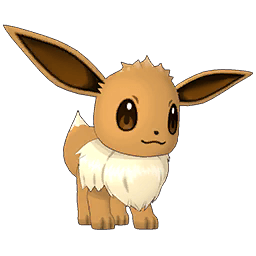 The question of why only Eevee has such unstable genes has still not been solved.

HP Up: An ally
Defense Down: An opponent
Move Gauge Up: All allies
Attack Up: Self
Baton Pass
Stat Decrease Immunity

Potion
Restores a bit of an ally’s HP.
Hide Info
Iron Tail
Has a moderate chance of lowering the target’s Defense.
Let’s Go!
Increases the move gauges of all allied sync pairs by two. Sharply raises the user’s Attack.