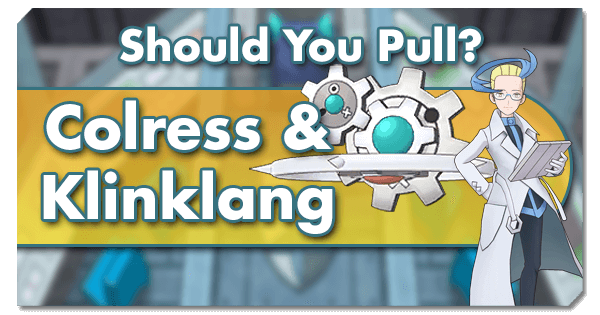 Primarily focused on Debuffing and team Critical Rate buffs with Sync Move damage as icing on the cake, Colress & Klinklang make for a solid 3rd slot Sync Pair to work alongside many Physical attackers.

Despite being interesting and effective, this is generally a safe skip. We have 2 new Holiday events next month, and at least one Master Sync Pair is fairly likely as well.

Team Plasma is well known in the Pokemon series for their many schemes and plots. In particular, their second set of plans involved wide-scale destruction at the hands of Ghetsis using the icy power of Kyurem to freeze the land. However, while Ghetsis often gets the credit for this plan, it was none other than Colress who enabled it! A Pokemon researcher who’s always standing on the sidelines watching, the activity of Team Plasma has brought him to Pasio, where he teams up with his Klinklang to debilitate all that would face them down. The once-and-former scientist of Team Plasma now seeks to dismantle the workings of Ghetsis, and he just might be able to pull it off with a little help.

Colress & Klinklang comprise a Steel Type Tech unit with a stat-line that is best described as “decent, but not outstanding”. Their moveset starts with Thunder Wave, which inflicts Paralysis on an opponent with 90% accuracy. Next is Screech, which drops the target’s Defense by 2 stages on use. We follow this up with Mirror Shot, which is a 2-bar Steel Type move with 85% accuracy and a 30% chance to drop the target;s Accuracy by 1 stage. For Science! is Colress’ single-use Trainer Move, and it grants +4 Defense and Special Defense to Klinklang while also setting the Move Gauge Acceleration. Finally, Potential-Surpassing Gear Grind is Colress & Klinklang’s Sync Move, which gets a power boost when the target is Paralyzed.

Moving on to Passive Skills, Ripple Effect 9 has 100% odds of turning the stat-drops from Screech and Mirror Shot AoE, making their debuffing capabilities far more manageable. Next is Team Critical Shock 9, which grants 100% odds of granting the entire team +1 Critical Rate when Klinklang successfully attacks an opponent with Mirror Shot. Finally, On a Roll 1 greatly increases the odds that Mirror Shot will successfully score an Accuracy drop on use.

First and foremost, Colress & Klinklang are heavily focused on making the opposing team wish that they’d just stayed home. Between Paralysis, Defense drops, and Accuracy drops, they bring a fairly comprehensive debilitating strategy to the table. They also have a bit of a supportive function built in as well, as they can accelerate the Move Gauge and start buffing the team’s Critical Rate as early as turn 2, and even +1 Critical Rate can be very invaluable as most offensive Sync pairs need to either use their buffing move twice to achieve +3, or outright lack the ability to go beyond +3 by themselves, and both of these issues are alleviated quite nicely by Colress & Klinklang. When that’s all done, this is also a Sync Pair that is capable of respectable single-target Sync Move damage, and while not hyper bulky, Colress & Klinklang’s base bulk and defensive buffs can allow them to keep the team in the game for a while after the team’s designated tank drops, adding one more layer to their strategic benefit.

So what exactly is the problem here? Well, this isn’t a Sync Pair that’s going to do well as a main attacker, and this also isn’t a Sync Pair that’s great at tanking, meaning they’re most likely to be relegated to the team’s third slot. And as time goes on and we get more and more powerful Tech Units that can outright decimate the opposing team and/or set field effects to make the team’s main attacker virtually go Super Saiyan with a surge of power, it’s becoming harder and harder to justify the use of general-debuffers like Colress & Klinklang on many teams. They also have the issue of being a little ineffective at what they do, as Paralysis is arguably the weakest status in Pokemon Masters in terms of its outright effect on the opposing team, and Accuracy drops are very frequently mitigated by enemy passive abilities to the point where Mirror Shot’s effects are unlikely to have a tangible effect on many battles save maybe 2-3 misses. When it comes right down to it, Colress & Klinklang’s main utility actually comes from their ability to score an AoE -2 Defense with Screech, and even that isn’t as impressive as it once was. They’re also a bit on the passive side, basically tickling the enemy team with Mirror Shot once their myriad of debilitating effects have already been used.

If you just want to utilize Colress & Klinklang for their tech capabilities, then ⅕ is perfectly fine, though Mirror Shot: Accuracy +5 is the only truly note-worthy tile at this Sync Move level. ⅖ makes their job a bit easier, as you can unlock Mirror Shot: Move Gauge Refresh 3, Pinpoint Entry 1, and Screech: Move Gauge Refresh 3, all of which have varying degrees of utility depending on the set. This move level also offers Metallic Healing 1 and Nerves of Steel 2, both of which can be helpful if you want to use Colress & Klinklang to tank alongside Palentines Marnie & Mawile.

If Sync Move damage is your plan, then ⅗ is going to be your goal. Static Shock 9 and Towering Force are the keys to maximum Sync Move damage output, while Catalyst and Go Viral 9 can be very helpful for a supportive set. On that note, Infliction Freebie 9 gets a special mention, as it can literally make it so that Colress & Klinklang use no Move Gauge when using Screech and Thunder Wave, making the debuffing cycle amazingly simple, even for slower teams.

Outside of a Sync Nuke set, spending the Power-Ups to get Colress & Klinklang to EX isn’t likely to pay huge dividends. The added stats are nice for tanking a few more hits and giving the team more Speed, but it’s not going to help much.

If you’re going for a Sync Nuke build, then Critical Strike 2 is definitely the way to go thanks to its reliable damage-buffing capabilities, and Vigilance can be useful for more tank-related builds. A more supportive build will appreciate Fast Track 2 for the added Speed that it can rack up in order to make the Move Gauge a bit easier on the team. From the Deluxe pool, Head Start 1 is a prime choice as well for various team strategies, while Healthy Healing is another option for a tank build.

Overall, Colress & Klinklang hold a solid base-line of viability through most major game-modes. They can heavily debilitate the opposing team on the Champion’s Stadium, and set the team up for potential victory as a direct result. In the Legendary Arena, they can potentially play into some key gimmicks with Stat Drops and Status while hitting for solid Sync Move numbers, or simply cripple the boss during the first HP bar to set up future teams for an easier victory at the very least. They’re even decent in the Villa, where their MP-free Critical Rate buffs are a bit of a rarity, and their Debuffing capabilities can make the job a bit easier along the way. While not the best in any given game mode, they can definitely see utility.

Physical strikers with a slow/incomplete Critical Rate buffing profile and/or the ability to capitalize on Paralysis can definitely enjoy having Colress & Klinklang on the team. Two prime examples include N & Zekrom, who can make use of 100% of what Colress & Klinklang have to offer, and Iris & Hydreigon, who appreciate the stat gap-fill and can capitalize on the stat drops, in particular Defense, to drop potentially nuclear Sync Moves even without the use of Dragon Zone.

If the goal is to use Colress & Klinklang to Sync, then they will require a bit of help boosting their Attack, so Sync Pairs like Hop & Zamazenta, Sonia & Yamper, or Hilbert & Samurott are required partners, while Palentine's Marnie & Mawile are definitely recommended as well, as Steel Zone adds a tremendous amount of extra damage. And speaking of Marnie & Mawile; they’re also going to be very recommended if you intend to walk on the semi-risky Tank route, as Steel Zone also improves Colress & Klinklang’s tanking capabilities substantially thanks to their grid.

Colress & Klinklang are definitely not bad, in fact they can potentially be pretty useful on some teams. The problem right now is the fact that the competition is getting steeper and steeper, and Colress & Klinklang simply don’t sit in a strong position right now. And even if you don’t have any good Tech units right now, why spend your gems on a semi-mediocre one that you’ll likely pick up on a Poké Fair or Master Fair down the line anyway? While not the worst, Colress & Klinklang should be an easy skip for most players, especially since we’re going into December, meaning another Master Fair is pretty likely, and new Seasonal units are guaranteed!