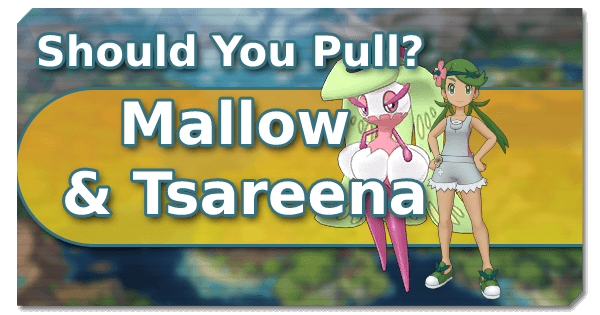 -Faces enough competition as a Grass Type attacker and a Tech unit to make its niche less than outstanding.

-Has very high damage potential and can help the team defensively with confusion and attack drops.

Let’s get this out of the way: Mallow & Tsareena are good. They sport great Grass Type damage that can potentially rival Brendan & Sceptile, and they can spread around enhanced confusion and drop enemy attack as well. They are powerful and worth using, but their issues stem from the fierce competition that they face for most of what they do, as well as the fact that their unique blend of features isn't in extremely high demand in most game modes. They also have issues setting up due to the fact that they have several multipliers to aim for in order to reach their high maximum damage, which makes them take substantially longer to get ready than many other damage dealers. In order to deal maximum damage, players will need to confuse the opponent, drop their attack stat to -6, raise Mallow & Tsareena’s Attack stat to a full +6, possibly gain +1 Critical Rate if an MP refresh fails, and have the sun active all at the same time. It takes a perfect storm, but the result is pretty potent.

Their ability to freely drop enemy damage and get a boost from it makes them an okay choice for the Battle Villa, though mainly Vs. opponents that stick with physical moves. Full Force Battles can be pretty rough, as a lot of this sync pair’s damage comes from dropping the opponent’s attack stat. This makes multi-wave battles less than ideal matchups unless paired with a sync pair or two that can provide help on that front. Arguably, their best performance will be in the Champion’s Stadium: Master Mode, where they can heavily disable the opponent and deal great Grass Type damage. Just don’t plan on picking up the “No Status Conditions” or “No Stat Reduction” options!

Players who want to use Mallow & Tsareena for their attributes as a Tech unit will want to aim for the aforementioned Trop Kick Overwhelm 9, Trop Kick Move Gauge Refresh 3, Stop Hitting Yourself 5, and/or the two Teeter Dance Move Gauge Refresh 3 nodes. Trop Kick Power Posture can also be great for giving Mallow & Tsareena more damage while dropping the opponent’s attack stat, though switching over to Power Whip once the opponent’s attack is dropped to -6 is a stronger option assuming the move gauge isn’t an issue.

As far as Lucky Skills are concerned, an offensive Mallow & Tsareena will want the tried-and-true Critical Strike 2, as it provides the highest average damage boost and synergizes with their ability to raise their own Critical Rate. A tech-oriented build can also take advantage of this, though Defense Crush 2 is also worth considering, as it can make Mallow & Tsareena even more debilitating to encounter by granting a chance to drop the target’s defense stat with each move. Mad Strength 2 is also a fair choice as Mallow & Tsareena can’t naturally boost their own Attack, though it’s probably better to just run them with a support unit that can boost Attack and pick up Critical Strike 2.

Team comps that synergize with Mallow & Tsareena really depend, once again, on how the player intends to use them. For damage-dealing, Lyra & Meganium are their best friends. The ability to raise the sun and boost the team’s Attack, potentially even max it with the proper grid and bit of MP refresh luck, fills most of the holes in Mallow & Tsareena’s strategy. Dawn & Torterra are also exceptional support, as they not only make for a very solid wall which buys valuable time for our Alolan Trial Captain to set up, they also have the ability to drop the Attack stat of any opponent that attacks them, making it far easier for Mallow & Tsareena to reach their max damage. These three together can also activate a triple Grass Type theme skill, making them substantially harder to break through as a result. On the Tech side, Mallow & Tsareena can help support basically any designated tank when facing Physically offensive opponents thanks to Trop Kick’s Attack drops and Teeter Dance’s confusion enhanced by Stop Hitting Yourself. In fact, sync pairs like Jasmine & Steelix have the potential to become hilariously hard to break when paired with these effects, and frail sync pairs like Lusamine & Pheromosa can breathe a sigh of relief as they gain the potential to survive more than one or two attacks or Sync Moves.

No: While worth considering if you lack powerful Grass Types and have the support to make them work or genuinely want a sync pair that can drop attack and confuse, it's probably best to not spend much on this banner. Mallow & Tsareena are undeniably powerful, but they are also unwieldy and somewhat limited in utility when compared to their competition. DeNA has promised us some potentially interesting sync pairs in the fairly near future, so save those gems and hopefully you’ll nab Mallow while pulling for something more impressive for the 1.5 year anniversary! We’ve waited over a year since she was featured as an NPC in the first Christmas event, so what’s the harm in waiting a little longer?