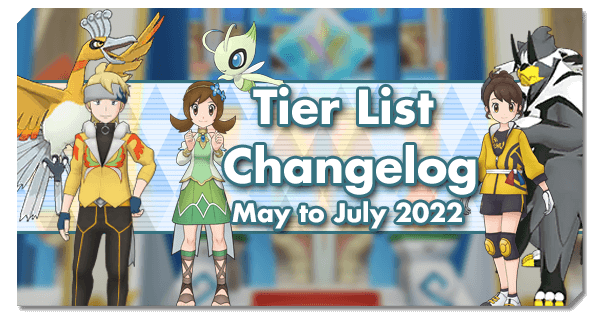 Welcome to the July update for our Tier Lists! As you might have noticed, changelogs haven’t been published for a while - as such, each Tier List will have a general explanation for bigger moves over the time that passed, and later get to some more specific moves. As such, let’s not waste any more time and dive into the May to July 2022 changelog!

General – Taking the precedent of the other Tier Lists, Tier 0 has been expanded again despite the existence of SS Serena - as such, the fourth sub-group came back to it. Meanwhile:

Tier 0 – As mentioned before, it now features 4 sub-groups again, with Lear and SS Red returning to the Tier, SS Erika being added with Grassy Terrain, and the newcomer Dojo Gloria being added at the top of the last sub-group.

Tier 1 – SS Ethan has been added at the top of the Tier due to his amazing individual performance, but is a bit limited due to having to have teams built entirely around him to get his full potential. SC Sonia has been also added to the top sub-group due to her near-perfect synergy with SS Lyra and still retaining a solid performance otherwise. SC Diantha has been moved down due to her lack of niche on stronger compositions, as her self buffs are not as valued as they once were. SS Korrina has also been added with some of the highest damage ceilings in the entire game only limited by MP on her main move.

Tier 2 – The entire Tier has been reorganized, with Cyrus once again solidifying as a top Rain Striker despite the multiple buffs that the archetype has been receiving. Summer N has been added to the second sub-group with his high damage and self-sufficiency, but not the most reliable multipliers. Leon greatly benefited from SS Morty and moved up, while Classic Blue lost some space with his lower damage compared to others.

Tier 3 – Silver got a big boost between the addition of his EX, Power Boost, and SS Morty, moving up to the second sub-group. Nessa got a valuable partner with Dojo Gloria enabling her multipliers.

Tier 4 – Diantha got a Devastation enabler with Bede and has been moved up, and NY Lance can also now make use of both rain and Flying Zone with SS Kris. Bea has been moved down closer to Fall Hilbert, as the lack of recoil and sure crit Sync Nuke shouldn’t display such a big disparity with her considerably lower damage.

Tier 5 – Summer Gloria and Barry now have far more reliable teams with the addition of SS Kris for both and Dojo Gloria for the latter. Wally has been moved down due to his old position not being considered reflective of his actual performance.

Tier 6 – Kris got a lot more usable with the release of her EX, while Clair has a similar situation to NY Lance where she can now make use of her kit on a single team thanks to SS Kris.

Lower Tiers – Hau has been moved up due to the addition of his EX. Valerie and SS Brock got their Sync Grid expanded (with SS Brock also getting EX), but didn’t quite manage to separate themselves from the stronger ungridded pairs, while Bugsy got the last spot of Tier 9 on his own sub-group.

Tier 2  – SC Ingo dropped to the top of this Tier in a solo sub-group as a result of Tier 1 expanding. SS Leaf re-climbed to her previous placement due to the addition of Grassy Terrain and overall appreciation of her utility. Lucian has been added to the bottom of the Tier.

Tier 3 – This Tier got redistributed overall, with Champion Iris dropping from Tier 2 and now leading Tier 3 in a solo sub-group while May & Mega Lopunny dropping to the last sub-group of Tier 3. Bertha has been added to the second sub-group of the Tier alongside Volkner.

Tier 4 – Dawn and Mallow are now leading the Tier with the introduction of Grassy Terrain in the game. Misty saw a significant raise due receiving a new amazing partner in SS Kris. Koga dropped to the bottom of this Tier as he’s getting more and more outclassed in his Mind Games niche as new units are being released.

Lower Tiers – Some reshuffling happened due to a notable amount of recent 3* gacha units receiving their expanded Sync Grid. Namely, Winona joining Candice at the top of Tier 5, Brawly and Whitney being added to the middle of this Tier, while Crasher Wake is rising to the top of Tier 6. Clay and Lorelei are now alone on Tier 7, while waiting on their expanded Sync Grid to get released one day.

Tier 0/1 – With the recent additions of SS Morty and SS Kris who have joined the very top of Tier 0, we’ve decided to keep the size of the Tier reasonable, so SS Blue and Sonia dropped as a result and are now leading Tier 1 in their own sub-group. Aaron has been added to Tier 1.

Tier 2 – Kiawe and Sabrina dropped from the middle and bottom of Tier 1 respectively to the upper sub-group of Tier 2 over time due to less relevancy in the current metagame. Meanwhile, the Tier has been redistributed slightly, mostly accounting for Lyra’s recent EX release.

Tier 3 – Similarly, Palentine Dawn and Holiday Bea are now leading this Tier as a cascading result of the drops mentioned above.

Tier 4 – Phoebe and Skyla both saw a significant drop from Tier 3 to the upper-middle range of this Tier as they’re both lacking some extra relevancy or utility tools compared to the units above them. Summer Hilda got added to this Tier.

Lower Tiers – Tier 5 & 6 saw some slight redistribution over time to refine the rankings. Nanu joined the bottom sub-group of Tier 7 while BP Erika dropped down to the last spot here. Meanwhile Blaine, Wulfric and Glacia are now leading Tier 8.

Overall, this was quite the update for all 3 lists over the past few months due the recent release of very powerful and meta-defining units! We're always looking for more thoughts and constructive feedback to improve our analysis and articles so make sure to drop a comment below if you want to help us refine our ever-evolving Tier List!