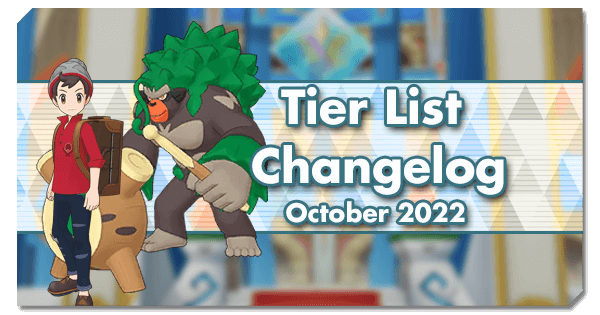 Welcome to the October update for our Tier Lists! For this spooky season, we may not have that many movements among the old pairs, but we still got more new pairs to compensate than we’re used to - so, without wasting any more time, let’s check it out!

General – As usual, an increasing amount of units has made some units move down without actively getting worse, but due to a cascade effect of stronger units being added on the higher tiers.

Tier 1 – With his 5/5 grid update, Raihan has been moved up all the way to the yellow subgroup, improving his DPS build decently and getting an all new Sync Nuke build, which, despite not having the best setup, has incredible damage potential. SS Korrina has also moved up a bit being one of the main users of Ghost Rebuff.

Tier 4 – NY Volkner has been recognized as more efficient than the other units on this Tier and received his own subgroup. Diantha and Summer Marnie have also moved up here due to the great buff they received in Fairy Zone and Fairy Rebuff.

Tier 5 – Hilda now leads her own subgroup due to a minor buff with Fire Rebuff and being generally considered more efficient overall than the other Sync Pairs.

Lower Tiers – BP Sophocles has moved up to Tier 7. Looker and Summer Lyra have been moved to the bottom of Tier 8 with the addition of their Zones, while some pairs that lack in the Nuke department, such as Lodge Sycamore and Naomi, have been moved down. Lodge Marnie and Tate have also been adjusted with their Zone and grid buffs, respectively.

General – Two new Tiers have been introduced to make each Tier less populated.

Tier 1  – Maxie has been moved to below SS May to better reflect the power level of Tier 0 units. SSR Cynthia now has her own subgroup with the new options added for Ghost teams.

Tier 2 – SS Wally has been added to the top subgroup with a superb Sync Nuke, Sync Acceleration, and supportive options in Speed buffs, Fairy Zone, and Fairy Rebuff, but being held back by average buffs and bad DPS. SC Rosa has also dropped one subgroup.

Tier 3 – Deoxys-Speed now leads the tier with generally useful tools in gauge support, Sync Acceleration, and decent DPS. Gordie has been added to the second subgroup bringing both Fire Rebuff and sun and having a Sync Nuke available, but lacking in sufficiency and his own gimmick limiting the usefulness of his Sync Nuke while having very low DPS. Palentine Serena has been upgraded to the third subgroup with the addition of SS Wally.

Tier 6 – Plumeria now leads the tier with Poison Zone being added improving her offensive use. Similarly, Koga has also been moved up to the second subgroup, and Whitney follows behind with a better appreciation of her utility kit.

Lower Tiers – Lodge Lillie has been moved from Utility to Hybrid due to her decent Sync damage potential and DPS when there’s only one target available, being added to the top of Tier 8 alongside Lucy, who got both a Sync Grid and Poison Zone to make her stronger. Norman has been added to the second subgroup of Tier 9, having the possibility of taking some hits and paralyzing the opponent for Legendary Arenas, but being extremely underwhelming in pretty much every other aspect.

Tier 0 – The subgroups have been changed due to how close each support is on this Tier.

Tier 1 – SC Lillie is now in the same subgroup as Spring Burgh due to the fall of generalists supports, and Melony has been added to the last position of the Tier with the possibility of locking the opponents from moving with Sing, having decent buffs with crit and SpA AoE, very solid defensive profile with Screens, but being held back by her lack of burst recovery, possibility of maxing more offensive stats, and not particularly facilitating gauge.

Tier 2 – Fall Allister has been added to the first subgroup of the Tier being capable of maxing crit in one turn, giving Ghost Rebuff, and being a great tank, but lacking more offensive buffs and not having the best gauge support. Some subgroups have also been redistributed.

Tier 4 – Deoxys-Defense has been dropped further, without being capable of carving a niche for itself compared to other, better supports due to the lack of key qualities, lik crit buffs, gauge, and Support EX.

Lower Tiers – Tier 5 has seen a reorganization due to the lack of movement within the last updates, while Glacia has been added to the top of Tier 6 with her grid buffs addressing better her tanking qualities and giving her crit buffs, two things that she needed help with. Lodge Raihan has been added to Tier 7 being a mixed offenses support and summoning Sandstorm, but being convoluted in the way it puts the weather in the field and having a defensive profile that buffs itself, but not its partners, and with a general lack of better buffs like crit and gauge or having Support EX available.

This concludes the October update for our list, which wasn’t that big, but still had some pretty interesting movements, don’t you think? We're always looking for more thoughts and constructive feedback to improve our analysis and articles so make sure to drop a comment below if you want to help us refine our ever-evolving Tier List!

Should You Pull? Raihan & Duraludon

Should You Pull? Melony & Lapras

Should You Pull? Gordie & Coloassal

Should You Pull? Victor & Rillaboom

Should You Pull? Fall Iris & Naganadel