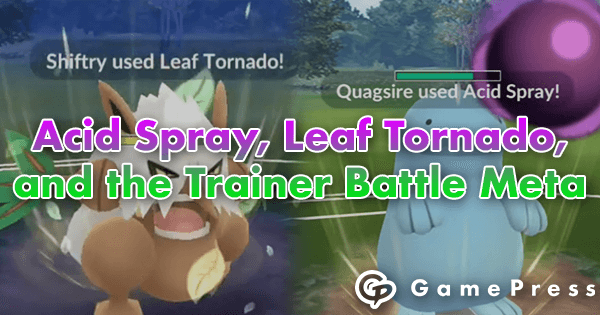 To celebrate the Equinox, Pokemon GO is holding a special Grass-type type event. Along with that, Acid Spray and Leaf Tornado have been permanently added to select Pokemon movepools. Like Power-Up Punch, these new moves have special effects in Trainer Battles. Unlike Power-Up Punch, they appear to be bit underwhelming rather than meta-defining. The article below details Acid Spray and Leaf Tornado’s problems while highlighting the few Pokemon that can use them well in the Pokemon GO meta.

Acid Spray is one of the worst charge moves in all of Pokemon GO as it deals only 20 damage for a steep 50 energy cost. To make up for this, it also drops your opponent’s defense by 2 stages. This drop makes it so that neutral damage essentially has a super effective multiplier against any Pokemon which seems like a massive gain in battle. However, with a 50 energy cost, Acid Spray doesn’t come early or frequently enough to make it truly have an impact on most battles.

While relatively new, up until this point in Pokemon GO buffing effects have been the extra spice tacked onto moves that your Pokemon were going to use anyways. Ominous Wind, Silver Wind, Ancient Power, and Power-Up Punch are all low energy cost charge moves and for the most part, have decent damage for their energy cost. This makes these moves useful for a Pokemon to haphazardly throw at their opponents in order to bait for a shield or just to deal damage to them in general. If Acid Spray paralleled Power-Up Punch, having 40 damage at a 35 energy cost with a single defense drop, it would become significantly more useful for every species that can use it. Unfortunately, Acid Spray comes too late to the game with a mismatched energy cost and output.

One thing that holds Tentacruel back in PvP is its reliance on heavy 65-75 energy cost charge moves. In most cases, if the opponent is carrying a shield it’s game over for this cephalopod. Acid Spray offers Tentacruel a lower energy cost option to bait shields with as you charge back up to Hydro Pump or Blizzard. This suggests that Tentacruel may now have some early/mid-game viability while still functioning as a late game nuker. It will cost Tentacruel a degree of coverage, but most things won’t be surviving Hydro Pump anyway.

It’s important to note that Acid Spray isn’t a “must have” move for Tentacruel. The extra coverage provided by Sludge Wave or Blizzard may be the preferred option depending on your team composition and how you plan to use Tentacruel. Muk, Alolan Muk, and Quagsire are similar in this respect- using Acid Spray could be the extra spice in some key matchups, but they stand to gain more from their second move being used for coverage.

Victreebel’s main mission is to demolish its opponents with its heavy Razor Leaf damage. Due to Razor Leaf’s low energy gains, in most encounters, it won’t have the opportunity to use any of its charge moves more than once. As a result, Victreebel doesn’t have much to lose by using Acid Spray. The worst that could happen is your opponent not shielding, and hey, great job, your defense is still down by 2 stages. Depending on where you are in the battle, Acid Spray could even turn a Victreebel counter into prey.

There may be some scenarios where using Leaf Blade is more beneficial, such as finishing off a shieldless opponent or fainting before reaching Acid Spray. Fortunately, we get to use 2 charge moves in Pokemon GO. If Leaf Blade is more useful at the moment, then use it instead.

Like Acid Spray, Leaf Tornado has too low of damage for too high of a cost. To make matters worse, it only has a 50% chance to lower your opponent’s attack by a single stage, making almost no impact. If being costly, weak, and unreliable weren’t bad enough, the two Pokemon that received it already have Leaf Blade which is one of the best charge moves in PvP. One thing that works in Leaf Tornado’s favor is that Victreebel and Shiftry are both Razor Leaf users, suggesting they’ll only be using one charge move per fight. Since the opponent will either be shielding it or tanking it, it may as well be a debuff. That said, Victreebel already has a 100% guaranteed 2 stage defense drop in Acid Spray and Shiftry is almost entirely un-viable in PvP. In either case, the low energy cost and extra damage from Leaf Blade will be more favorable than Leaf Tornado almost every time.

Where Power-Up Punch appears to be slightly overpowered, Acid Spray and Leaf Tornado seem very underpowered. While every single move in Pokemon GO can’t be meta-viable, if Niantic is going to do a special slow release of buffing and debuffing effects, having our two new attacks be underwhelming is a real let down. The next question is, to be we want new moves going forward to fill the middle of the road, or do we want to encourage the power creep?