Community Posts with Keyword Dragonite All 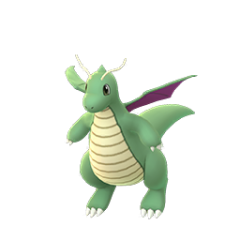 When Pokemon Go first released, Dragonite was the Pokemon to have. Super Effective damage didn't have much advantage over simple STAB, so Dragonite's high power, great attacks, and pervasive typing made it a top choice for clearing gyms, and the general lack of Ice Types made it a top choice for defending gyms as well. Nowadays, Dragonite has fallen off a bit, but it's still very viable, and one of the most accessible "good" dragons in the game as well. Dragonite is a work-horse of a Pokemon that's very capable, and is a solid pick any time a Dragon Type weakness shows up.

Following the GBL Season 8 update, Dragon Tail on paper is slightly stronger than Dragon Breath, but the latter is much easier to use and benefits significantly more from certain breakpoints. Steel Wing is a poor move.

Dragon Claw is mandatory for its cheap energy cost and solid damage. You have some freedom in secondary charged moves, though you do spend most of your time just spamming Claws.

Draco Meteor is the most extreme option, giving an incredibly powerful nuke in shields-down scenarios. Outrage is less hard-hitting than Draco, but also less punishing if it gets shielded. Hurricane is really nice because it actually gives you a way to damage Fairy-types, though its energy cost makes it inconsistent as an actual answer. Superpower is the recommended move for Dragonite, giving it an option against common Steel-type Pokemon, in addition to its other weaknesses against Ice and Rock Pokemon. It should be noted that without Hurricane, Dragonite has no answer to Fairy Pokemon at all, but Dragonite wouldn't typically win in a one-on-one fair fight against Fairy Pokemon anyways.

Dragon/Flying dual-type Dragon Breath user. Sound familiar? Dragonite has a lot of competition in Great League, and it ends up often just being a worse version of Altaria, especially since it has no real way to hit Azumarill. While Dragonite's not unusable, there are definitely better picks. Its high ATK stat also significantly limits its bulk in CP-capped leagues.

The higher CP cap of Ultra League helps Dragonite survive longer compared to Great League, enabling it to spam more STAB Dragon Claws. Its resistances against common typings like Water and Fighting give it a major advantage against much of the meta. Access to Superpower following the September 2022 update further increases Dragonite's potential, allowing it to threaten common Steel-type Pokemon as well. It's not enough to mitigate its double weakness to Ice-type Pokemon, but at least Dragonite now gives them more to worry about.

Dragonite sets itself apart from the numerous Dragon types in Master League due to its access to Dragon Claw. This enables Dragonite to pressure other Dragon-types more quickly, giving it a slightly positive match up against them (outside of the ubiquitous Dialga). Its Flying secondary typing also allows it to completely counter Mud Shot Groudon. Other than that, you can expect Dragonite to reliably perform its role as a Dragon-type, namely beating Kyogre, Ho-Oh, and Giratina-O, courtesy of its strong moveset, resistances, and overall high stats. Thanks to Superpower's addition following the September 2022 update, Dragonite can now fight back against Steel-type Pokemon. It can even sometimes defeat Dialga, a rare quality amongst Dragon-type Pokemon.

Dragonite's largest weakness remains to be its inability to break past Fairy-type Pokemon, further exacerbated by it choosing Superpower over Hurricane as its secondary Charged Attack. Zacian, Togekiss, and Primarina all can wall Dragonite without much effort. It can also be rather fragile at times - a Brave Bird from Ho-Oh can put it in critical condition.

Xerneas and Yveltal Coming in May, Luminous Legends X and Y Events Announced

The Safest Pokemon Bets for Gen 4