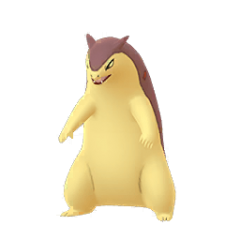 Always a budget option among the Fire Type starters, poor Typhlosion has steadily drifted farther and farther into obscurity with each new Fire Type Legend, Shadow, and Mega Evolution that's hit the scene. As it sits, it's simply not worth investing in poor Typhlosion, as the stardust could be better spent elsewhere.

Incinerate is a very slow 5 turn fast move, but its greater energy gains compared to Ember are needed for Typhlosion's costly charge moves. Shadow Claw lacks STAB, but it can offer neutral damage when Fire-type attacks would typically be resisted, in addition to having a significantly faster animation than Incinerate.

Blast Burn is one of the main features of Typhlosion, being one of the most powerful charge moves for PvP, but 50 energy cost isn't that cheap. If you don't have access to Blast Burn from Community Day, it's probably best to choose another Pokemon. Solar Beam is the only other consideration for Typhlosion since Blast Burn outperforms Fire Blast and Overheat. With an insanely high 80 energy requirement, you might not even use Solar Beam at all.

While Typhlosion is popular among Heart Gold/Soul Silver players, it's somewhat unfavorable in Pokemon Go PvP. A high ATK stat distribution results in low durability which prevents Typhlosion from enduring prolonged fights. The addition of Incinerate following the GBL Season 5 update is a welcome addition that gives Typhlosion a STAB fast move with high energy generation. While this is a direct upgrade, Incinerate can be cumbersome to use as a 5 turn move. The lack of a cheap charge move energy-wise also can cause Typhlosion to struggle against Pokemon with faster movesets.

Typhlosion performs much better in Ultra League thanks to a higher CP cap. The same issues it had in Great League are still mostly present in Ultra League, but the combination of Shadow Claw and Blast Burn has fantastic coverage on the core picks, Giratina and Registeel. It battles for the spot of best Fire-type with Charizard and Talonflame. The addition of Incinerate gives Typhlosion a fast move option that meets its high energy needs to fuel Blast Burn, while also dealing powerful STAB damage.

Typhlosion doesn't have the stats needed to perform at the top level that's dominated by legendary Pokemon. Wins against Grass and Steel-types are to be expected, though insufficient stats causes issues with Melmetal and Dialga. Likewise, a win against Lugia in Ultra League becomes a loss in Master League for the same reason. Perhaps consider other options for Master League.