Community Posts with Keyword Azumarill All 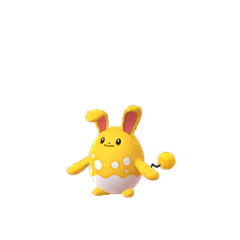 With a max CP barely clearing 1500, don’t expect this bunny to be making waves on offense. However, just like another low CP, egg-shaped Pokemon we know, what Azumarill lacks in offense it makes up for on defense. Or at least, it's not awful.

A low max CP gives Azumarill a low motivation decay rate, making it ideal for long term gym defense. Even after several hours in a gym, Azumarill still requires 3 battles to defeat. Its Fairy-typing and access to Play Rough will punish attackers unfamiliar with Fairies. Opponents hitting with Grass-types will have to be wary of Ice Beam.

Bubble is a very good move for PvP and also takes advantage of STAB with Azumarill. Generating 3.67 EPT (Energy Per Turn) and dealing out 2.67 DPT (Damage Per Turn) results in a very balanced move that performs well above average.

Ice Beam gives Azumarill excellent coverage and flexibility to deal with a wide range of Pokemon, including Grass types that can give Azumarill trouble. Ice Beam also has the perk of requiring the least amount of energy (55) among Azumarill's charge moves. Hydro Pump is a good finishing move and also can threaten KOs due to its high base power of 130 plus STAB. While the 75 energy required is quite steep, Azumarill's excellent bulk gives it the time needed to build up energy.

This combination eschews Azumarill's Ice Beam in favor of its two expensive STAB Charge Moves. The goal of this set is the same as the first; wide coverage, though this set concedes to Ice-types in favor of winning the mirror matchup. As Azumarill is one of the most utilized Pokemon in the Great League, this set recognizes the importance of countering itself with Play Rough. Play Rough and Ice Beam share overlapping coverage against Altaria, while Hydro Pump allows it to take down a variety of Steel-types that would otherwise threaten it. As noted above, Azumarill has the bulk to build energy for these higher costing moves, so combining these two can give you a strong pair against the open field.

Azumarill is a fan favorite in the Great League, featuring incredible bulk while sporting a very interesting Fairy/Water typing. Azumarill's bulk even allows it to take a few direct hits that would be Super Effective and still give Azumarill a chance to fight back. Access to Ice Beam provides wide coverage and helps deal with Azumarill's weakness to Grass types, while Play Rough threatens common Great League picks such as Medicham and Sableye. It should also be mentioned that popular Dragon type picks such as Altaria also have a difficult time with Azumarill.

Azumarill's potential is limited to the Great League, as its maximum CP caps at 1588.

October Events
Whats your opinion on this? Now before Mr-Ex77 murders me, I think my favorite piece…
GBL Practice system
I feel many of us has thought about this but,what if Niantic implements a “Unrated…
What's up with Kyurem?
Hi! In the attackers tier list, Kyurem is in it, yet kyurem is considered REALLY bad…
Pokemon Go GBL Lag
Continuing the discussion from Weak Connection on Go Battle League: This has made GBL…
Asking for help building 2-3 teams for GBL
Hi! Like the title said, I would like some help to build some teams because I don’t…
Read More