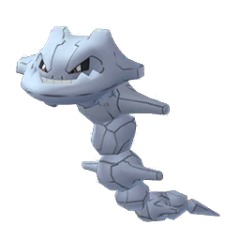 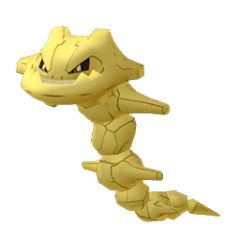 Steelix is tailored to be a defensive behemoth, possessing an enormous Def stat and one of the best defensive types. Steelix is one of the bulkiest defenders there is, being effective at wasting an attacker's time even in disadvantageous matchups. It unfortunately has weaknesses to many common Pokemon types such as Fire, Fighting, and Water. However, it's also a great wall for many other attack types like the ever-present Dragons. Steelix isn't exactly a highly recommended Pokemon, but some players may get genuine mileage out of its defensive capabilities.

Dragon Tail is preferred for its neutral coverage and slightly above average energy gains. Thunder Fang is more of a niche option due to its worse energy generation, but provides a different coverage option.

Crunch costs a moderate amount of energy and generally provides good neutral damage. Earthquake is very valuable for its wide coverage, and also gets STAB. Heavy Slam gets STAB but Steel-typing isn't very valuable offensively. Psychic Fangs costs the least amount of energy, and is mostly considered for its cheap energy cost for baiting shields, as well as its debuff utility.

Steelix is a very bulky Pokemon with 10 resistances, and is considered as one of the Steel Tanks in the meta. Through sheer bulk and resistances, Steelix acts as a wall to many Pokemon, and is often used to counter Flying-type Pokemon in this league like Altaria and Skarmory. Weaknesses to common Water and Fighting-types are major issues for Steelix, which requires it to be complimented with Pokemon that can cover its vulnerabilities. As more Pokemon are introduced into the game and moves are rebalanced over time, Steelix has fallen more out of favor compared to more popular picks like Galarian Stunfisk due to the notable differences in energy generation and coverage.

Steelix benefits from the level 50 update, with XL candy giving it more IV options to increase its bulk by opting for less ATK IVs. Unfortunately Steelix has taken the back seat in more modern PvP scenes due to Pokemon like Galarian Stunfisk surpassing its performance. That's not to say that Steelix isn't good; its huge bulk and access to Crunch is useful against Pokemon like Giratina and popular bulky Psychic-types like Cresselia and Armored Mewtwo. However Steelix at this phase of the game is more often than not benched due to its slower access to charge moves and losing to Galarian Stunfisk, Registeel, and Empoleon.

Steelix lacks sufficient stats to compete well in Master League. Its typing and moveset enables wins against Dialga and Raikou without too much trouble, but Groudon is a stronger pick for its role.