Community Posts with Keyword Salamence All 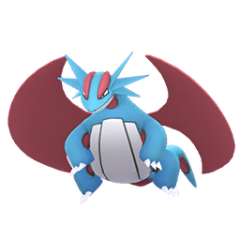 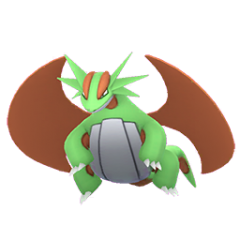 Salamence is a powerful 'mon that stands tall among the other Dragon-types. The second highest non-legendary Attack stat puts its potential above Dragonite with the addition of Outrage to its movepool. With Outrage and Draco Meteor together, it can even Surpass Rayquaza, the strongest non-shadow Dragon in the game, in specific scenarios. However, the small boost in damage is generally not worth the cost for most players. Having access to a fast and charged Fire-type move is useful for the Ice-type hard counter.

Basically, you're going to want a Salamence.

Dragon Tail provides average damage and slightly above-average energy generation that Salamence needs for its expensive moves, as well as solid neutral coverage. Draco Meteor is the strongest move that Salamence can muster, offering very solid damage off of its high attack stat and a relatively low energy cost, but it also drops its attack by 2 stages, leaving Salamence severely weakened after 1-2 uses. Fire Blast rounds out the coverage, helping with Steel and Fairy Types that would otherwise wall this set.

Salamence is weighted towards attack and has a poor PvP moveset, leaving it unviable in the Great League.

While not as bad off, Salamence is still a poor pick for the Ultra League

Again: Salamence is just not a PvP Pokemon. Even when fully unbound in the Master League, its slow moves do it no favors.

Xerneas and Yveltal Coming in May, Luminous Legends X and Y Events Announced

The Safest Pokemon Bets for Gen 4

How to Train Your Dragon