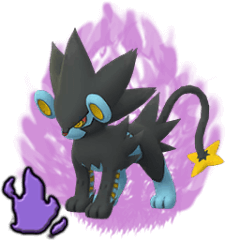 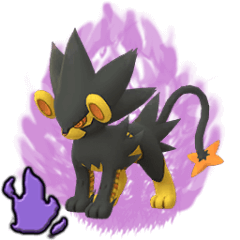 Luxray was always a pretty solid attacker, and the Shadow Pokemon boost brings it to new levels of viability. It may not be the outright best Electric Type in the game, but it's still a very viable choice, if a bit frail in practice.

Spark or Snarl + Wild Charge and Crunch or Psychic Fangs*

Spark is generally recommended due to it benefiting from STAB, while Snarl is a Dark-type move with slightly better energy generation. Hidden Power could be chosen for its initially unpredictable typing, but the lack of energy gains and questionable consistency makes it niche at best.

Wild Charge benefits from STAB and threatens massive damage, but can be risky to use due to its self-debuff. Crunch offers Dark-type coverage and lacks STAB, but can be used without risk of any self-debuffs. Hyper Beam demands too much energy. Psychic Fangs from the Shinx Community Day event gives Luxray a much needed Charge Move that costs low amounts of energy in order to pressure shields with.

Luxray sports Electric-typing with access to Dark-type coverage, though its fragile bulk is of concern. Access to the powerful Wild Charge means Luxray would ideally prefer to fight when its opponent has no shields, or alternatively it can stack 90 energy and attempt a back-to-back double Wild Charge (and switch afterwards). Neutral matchups tend to be struggles for Luxray due to its bulk, with notable losses against opponents with high damage output, such as those with Dragon Breath or Charm. While its advantage against ubiquitous Water-types is notable, overall it's not the most ideal pick in this league. The addition of Psychic Fangs following the Shinx Community Day event gives Luxray more potential for bait-and-nuke plays with Wild Charge, but without stronger damage output from its Fast Move, Luxray might struggle with consistency.

Luxray's fragility remains its biggest problem in Ultra League, where losses against Pokemon with faster movesets, better bulk, or stronger damage output discourages its use. Wins against various Water and Flying Pokemon are to be expected, though not all fights are won cleanly, and notably Luxray can tend to underperform if its opponent uses two shields.

With a max CP of 2888, Luxray falls behind other Pokemon in this league stat-wise, and is generally an inferior choice when compared to other Electric-type Pokemon.