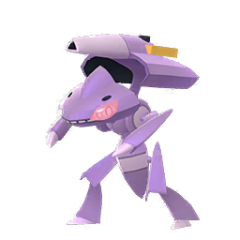 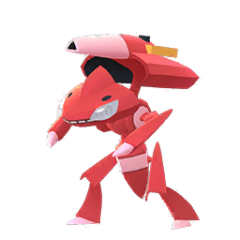 Genesect has been revived from its fossil, and it's here at last! Team Plasma's monster has hit the scene as the new strongest Bug Type attacker at the time of its release, but sadly it's not quite strong enough to be extremely valuable. Basically any time that it's the top non-shadow Bug attacker, some other type can probably do the same job better, except for 2x effective scenarios of course.

With the introduction of the different drive versions of Genesect, some may be worried that good old-fashioned vanilla flavored Genesect is less valuable. Well, don't worry about it. Techno Blast's various versions are only good in PvP, so a normal Genesect is just as viable as any of its alternate formes in raids.

X-Scissor costs the least amount of energy, benefits from STAB, and can be spammed often. Magnet Bomb offers some extra coverage, and in neutral fights can deal surprising amounts of damage with STAB. Hyper Beam is among the most expensive charge moves in the game energy-wise, and is not recommended due to the risk of being shielded, in addition to not benefiting from neither STAB nor a Super Effective multiplier.

Genesect is a Bug/Steel Pokemon with high offensive stats, relatively poor bulk, and a spammy moveset. Due to the CP cap of Great League, Genesect's performance very closely resembles that of Scizor, another Pokemon with the same typing, very similar stat distribution, and almost identical movesets. To compare between the two, Genesect sports the superior Steel-type charge move, while Scizor features the superior Steel-type fast move. However, in the Great League meta these features are not typically valued due to Genesect's poor bulk, and very niche coverage. Some Pokemon that are considered to be very bulky in this league can overcome Genesect, even when Genesect would have a typing advantage. Overall this is probably a Pokemon you can pass on, especially considering the large resource costs needed to unlock its secondary charge move.

Access to quick Bug and Steel coverage in addition to Bug/Steel-type resistances gives Genesect a good niche in Ultra League. Wins against popular Fairy-types and advantages against bulky Psychic-types are definitely a welcoming addition to anyone's team, but struggles against the rest of the meta results in Genesect being more questionable than favorable.

With a max CP of 3353 and somewhat poor bulk, Genesect would appreciate additional stats to compete with the top Pokemon in this league. Unfortunately its Bug and Steel coverage is almost useless in this league, where Dragons and Steel-types are ubiquitous. It gets some points for being able to beat Fairy-types, but it doesn't get much better beyond that when it comes to the popular meta.

Had this happen?
5 posts - 5 participants Read full topic
How to play Pokémon Go on Laptop
I love to play Pokemon go on my Smartphone. Can I play Pokemon Go on Laptop? If yes,…
Can't use berries for pvp legendary catch
Anybody else? A kartana just showed up as pvp reward but I can’t use any berries (or…
Pokemon Go power up at level 40
Hi! I have reached level 40 and if I want to power up pokemon to max CP at level 40 I…
Florges Color Differences? I know it’s not shiny…
Can anyone tell me why these mons are different colors? I’m a poke dummy . …
Read More