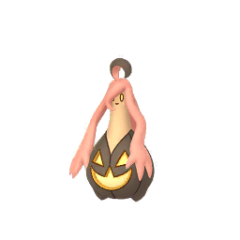 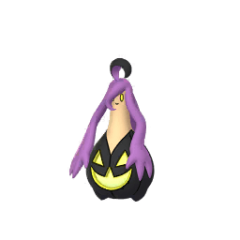 This Pokemon comes in four sizes, each with its own unique stat spread. Please click the following links to see each variant:

Hex primarily focuses on high energy generation to make use of Charge Moves more frequently, while Razor Leaf is the polar opposite and emphasizes high Grass-type damage output rather than energy gains. Either can be chosen.

Seed Bomb is useful for its lesser energy cost, making it useful for baiting shields, while also providing valuable Grass-type coverage. Shadow Ball hits hard with STAB, and is largely unresisted across the overall meta. Foul Play costs a more moderate amount of energy, but lacking STAB is discouraging when considering the similar coverage. Fire Blast demands too much energy to be used consistently, but can surprise and potentially OHKO unexpecting opponents.

Gourgeist competes very closely with Trevenant as another Ghost/Grass Pokemon with an almost identical moveset. Gourgeist has good bulk for Great League, but lacking Shadow Claw is significant enough to drop its performance by a notable margin. The extra option of Fire Blast is a nice touch but its insane energy cost makes it difficult to be consistent. Overall consider Trevenant and leave this pumpkin to decorate your Pokedex.

Gourgeist needs XL Candy to reach the CP cap of Ultra League, but its unimpressive performance discourages this option. With Trevenant being released at the same time as Gourgeist, it's unfortunate for the pumpkin Pokemon that Trevenant has taken all the attention.

You're being tricked into giving a treat to your opponent.