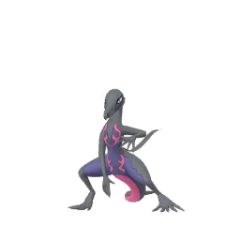 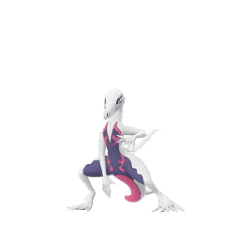 Salazzle is the only Pokemon to feature a Fire and Poison typing (other than its pre-evolution). Its ATK stat is respectable, with a passable moveset to support it. Unfortunately Salazzle is extremely frail and requires dodging to sustain itself in raids. Other Pokemon like Reshiram, Darumaka, or Roserade make for better PvE attackers, and thus Salazzle can be considered a Dex entry if stronger Pokemon are available. Don't bother for gym defense, one Earthquake will very likely KO it.

Both Fast Moves sport above average damage output and energy generation, with different typing coverage. Either are viable, though Incinerate has a very long animation that makes it more difficult to play.

Poison Fang is mandatory due to its low energy cost, enabling Salazzle to bait shields, as well as applying a debuff utility. Sludge Wave and Fire Blast are powerful STAB Charge Moves that demand a lot of energy to use. It is recommended to choose a different typing of the Fast Move in order to provide coverage. Dragon Pulse lacks STAB and is considered a subpar move, but can still be useful for its slightly lesser energy cost and neutral damage.

Salazzle sports a unique Fire/Poison typing, giving it a niche. Unfortunately with a very high ATK stat, Salazzle does not have a lot of bulk to tank damage. In addition, a double weakness to Ground-type attacks can be a very risky vulnerability. Due to its typing and fragility, Salazzle is best utilized for specific formats such as GBL or Silph Arena cups, instead open Great League.

Salazzle's moveset enables it to pressure its opponent with respectable Fast Move damage that ramps up with quick Poison Fang debuffs. Unfortunately due to its fragility, Salazzle can be less consistent than other Pokemon in this league, relying on successfully baiting shields and landing its hard-hitting moves to win fights. Alternatively, Salazzle does have options to win matchups by hogging both shields with increasing Fast Move damage ramped up by Poison Fang debuffs, but this is a very committed play. The lack of diverse Ground-types (compared to Great League) is appreciated, but Swampert is still common enough to be cautious about. It is recommended to take Incinerate for the otherwise difficult matchup against Galarian Stunfisk.