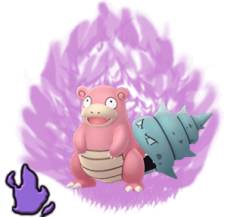 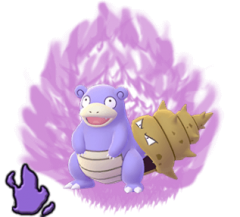 Shadow Slowbro is in the same basic place as normal Slowbro; it just sort of exists. It can be an okay defender, but in a meta where wasting time is key, the drop to defense that Shadow Pokemon suffer is not exactly a good thing. Still, Shadow Slowbro will definitely continue to exist!

Confusion is generally more preferable as it deals more damage than Water Gun.

Ice Beam is the most useful charge move due to its wide coverage, low energy cost compared to other options, and a good 1.6 DPE (Damage Per Energy). Psychic shares identical stats, but its coverage might be redundant with Confusion movesets. Water Pulse is a poor move that requires more energy, but provides Water-type coverage.

Slowbro is known in PvE as a bulky Pokemon with slower DPS, and this isn't much different in PvP. With a defensive stat distribution, Slowbro is relatively bulky compared to its competition which works in its favor. The lack of a low energy charge move combined with unspectacular energy gains from either of its fast moves causes Slowbro to be somewhat slower with shield pressure. Overall a disappointing candidate, though it can still find niche uses in specific formats.

Slowbro isn't particularly exciting for Ultra League, though its bulk does give some wins against more favorable matchups. The greater abundance of Dragon-type competitors in Ultra League allows Slowbro to have more targets to shoot at with Ice Beam, though that still isn't enough to beat the king of Ultra League: Giratina. In addition, Slowbro almost needs to be powered up quite considerably to reach its full potential, which is expensive and unappealing considering its poor performance. Consider other Pokemon for this league instead.

Slowbro is too slow for Master League.