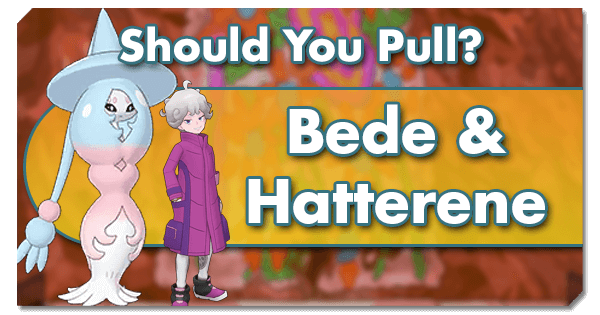 The last of the Galarian Rivals to arrive, Bede finally debuts as a Fairy-type Tech Sync Pair. Similar to Marnie, most wouldn’t expect a rival with a non-Legendary Pokémon to be a Poké Fair, but the precedent is set, and here we are.

Starting with Hatterene’s stats, we have a bulk of 633 HP and 186 defenses. This puts them in a similar spot as fellow Galarian Rival Marnie & Morpeko - a middle of the road bulk that won’t be recommended for a tank, but won’t make you worry too much about AoE moves either. A Speed stat of 280 is decent, and the same goes for their 336 Special Attack. Overall, Bede & Hatterene have some balanced stats that are neither terrible nor notable. Their moves are pretty simple too: Dazzling Gleam is a 2 gauge Fairy-type AoE move with no secondary effects, Mystical Fire is a single target Fire-type 2 gauge move that always drops the enemy’s Special Attack, and Psybeam is a single target Psychic-type move that costs 2 gauges and has a 10% chance to confuse the opponent, which is mostly irrelevant. Bede’s Trainer Move, Back to You!, offers a solid +2 Special Attack and +2 crit buffs alongside summoning the Status Condition Reflection field effect at the cost of -1 Defense. Their Sync Move, Most Elite Fairy Beam, doubles in power when the enemy is confused. Bede’s Hatterene is also capable of Gigantamaxing, offering G-Max Smite, which confuses all enemies, Max Flare, which summons sun, and Max Mindstorm, which summons Psychic Terrain.

Bede & Hatterene’s passives start with Battle Buff 9, which powers up the user’s moves and Sync Moves when the target is confused. This offers them a pretty solid Sync Nuke with just his base kit, although it won’t do enough to make them have relevant DPS. Stupefication 9 is probably Bede & Hatterene’s most defining trait, lowering the enemy’s SpA and SpD by one stage every time Hatterene attacks them, be it via a normal move, a Sync Move, or a Max Move. This goes very well with Dazzling Gleam’s AoE nature. Finally, Maximum Super Powered 5 is an upgrade to the normal Super Powered that includes Max Moves to power them up when Bede & Hatterene are doing super effective damage.

Bede & Hatterene are obviously meant to have two main roles: a special debuffer and a nuker. Theirgood self sufficiency makes it so you don’t need to dedicate a support for their nuking role, while Stupefication with Dazzling Gleam or Mystical Fire do a good job at setting up multipliers like Overpower and Brainteaser or even simply getting the raw Sp. Def drops. Their Max Moves also bring some utility, with G-Max Smite guaranteeing you activate Bede & Hatterene’s multipliers (and possibly Confusion Synergy for partners) while Max Flare and Max Mindstorm summons different types of field effects that have multiple special attackers that can make use of them.

Here, Bede & Hatterene can make good use of both their nuking power and their debuffs, as Dazzling Gleam is their most used move often, particularly when paired with EX Strikers. Max Moves can also really help with turn skipping or wearing center down, and due to the fast nature of Master Mode battles, the single summon of sun or Psychic Terrain via the Max Moves is perfectly acceptable too.

Debuffs shine the most on Legendary Arenas, which is great news for Bede & Hatterene. Here, Mystical Fire might be more worth early on to accumulate more Special Attack debuffs. Max Moves also bypass most passives that reduce damage, making them even more useful, and a high damaging Tech Sync Move will ensure that Bede & Hatterene will stay useful throughout the battle, although the field effects tend to be too short to really be abused here if Bede & Hatterene are the only setters. Confusion can also be used for Acute Senses.

Off-region, Bede & Hatterene’s damage won’t be useful, so they’re debuffers here mainly. The field effects could be useful, but Extreme Battles tend to be more resilient than Champion Stadium, so keep that in mind.

Bede & Hatterene can use their Max Moves every battle and still have their debuffs, so they have some good use here, although they face competition with more gauge efficient debuffers, like Lucian & Girafarig.

Bede & Hatterene only have one key node for their usage:

The following nodes will improve Bede & Hatterene’s performance at what they already do:

These tiles can have some niche usage, but won’t be very useful on generic stages:

Bede & Hatterene can be used at ⅕ as a debuffer, but they want ⅖ for Gobsmack 4 if they want to make better use of their nuking capabilities, setting up Sync Nukes, and not forcing a G-Max Smite without a Sync Buff. ⅗ will make Bede & Hatterene better at both of their functions and is a worthwhile upgrade if you can afford it.

EX is also pretty useful for them, unless you want to pair them with EX Strikers only.

Critical Strike 2 is the best option to improve the damage of Bede & Hatterene’s Max Move. Speedy Entry 2 is a niche option to help with the gauge, and as always, Head Start 1 can be used as a generic Lucky Skill to help with the first cycle Sync Coutdown and to combine with other Sync Accelerations.

Bede can be slotted as a generic boost to any special Striker due his Sp. Def debuffs - however, pairs like Alder & Volcarona, Diantha & Mega Gardevoir, and Summer N & Zoroark deserve a special mention by also getting their multipliers enabled.

On top of that, there’s also special Sync Pairs that can make use of either Psychic Terrain or Sun that are special - like Sygna Suit Lusamine & Ultra Necrozma, Sygna Suit Red & Mega Charizard X, and Lear & Hoopa.

Finally, some benefit from both the field effect and the debuffs as multipliers, making Bede a top tier partner for them: Giovanni & Mewtwo, Burgh & Leavanny, and Anniversary N & Reshiram are among those. Bede has good self buffs and has a good focus on utility, so he doesn’t ask for any type of support in particular himself.

Bede & Hatterene can be slotted on quite a few teams and what he does is surely useful - however, coming at a very competitive month does him no favors, and his base kit might not be so easy to be used by the average player. As such, he’s by no means a bad pull, but he’s not breaking the charts either.