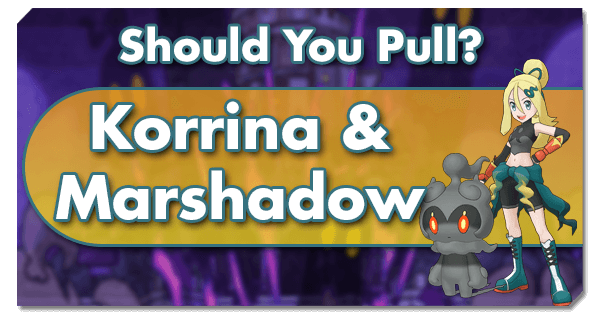 An offensive Tech Sync Pair that steals the opponent’s buffs and makes use of high multipliers for high damage output.

As a Sync Pair available since the game’s release, you would think that Korrina had everything that she needed to be good: her base kit included Crit, Attack, and Speed buffs, one of the strongest moves at the time with Close Combat, and a very high Attack, on top of receiving grid and EX before most story pairs. Unfortunately, despite the popularity of her Pokemon, this Mega Lucario owner now sits below almost every other gridded Striker. However, almost three years later Korrina has an opportunity with Marshadow that gives her a new light (or should it be a shadow?) to show what she’s really capable of - so, how strong is the newest Mythical Pokémon released in the game? Let’s find out.

Starting with her stats, SS Korrina shows that she’s serious about this: 448 Attack is very high for a non-Mega Evolved pair, while 390 Speed makes her gauge generation pretty generous. She has a bulk composed of 651 HP and 202 defenses. This is slightly higher than Champion Iris & Hydreigon, which is great news, as SS Korrina won’t have any problem taking AoE hits. This comprises one of the most solid stat lines for offensive Pokémon in general, as Marshadow has clear standouts on its two most important stats and still manages to get good numbers on its secondary ones. Going into their moves, SS Korrina & Marshadow feature Dire Hit All +, giving AoE crit buffs despite being an offensive unit. While this may sound nice in theory, it often doesn’t see as much play as one would think due to most strong supports these days also covering crit, but it still can be useful sometimes. Shadow Punch is a 2 gauge move that never misses, giving it low power. Their Trainer Move is Greater Heights!, which raises the user’s Attack by 4 stages, and Speed and Evasiveness by 3 stages while having 1 MP. While these are decent boosts in a vacuum, the spread of the buffs with only 1 MP and nothing being maxed, including Attack, could make this a bit underwhelming compared to other options, but we’ll get back to this later. Finally, Spectral Thief takes the last slot, Marshadow’s signature move. Like in the main series, it steals the opponent’s buffs - more notably, it’s an effect that happens before the user attacks, not after. It also costs 2 gauges and only has 3 MP, which can sometimes be annoying, and the BP is nothing too impressive as well. SS Korina & Marshadow’s Sync Move, Shadow-Shrouded Spectral Thief, plays off the target not having any stat boosts as its innate multiplier, which is not a very reliable condition, but Spectral Thief being Korrina’s main move helps with that.

Going to Passive Skills, we start strong with Good Form, previously seen on Anniversary Steven & Rayquaza. This is a multiplier based on any and all buffs that your Sync Pair has, making it have the highest cap out of any multiplier in the game, but it requires some work to truly get the value out of it. Her varied Trainer Move does make good use of it, however. Better Prepared 9 is a 90% multiplier to Marshadow’s attacks when the enemy has no stat boosts - this plays extremely well with Spectral Thief, which pretty much guarantees that it’s active when the move is used unless the enemy has some stat drop immunity. The passives are closed out by Fortuitous 9, which boosts one random stat when Marshadow uses an attacking move, and is meant to play off Good Form, although these boosts are kinda slow and random.

As is, SS Korrina & Marshadow are incredibly gauge efficient. While their moves have low power, they have the highest multipliers in the game, which brings them up to above most of the strong 4 gauge Strikers that we have (under the right conditions, SS Korrina & Marshadow actually are capable of beating all Strikers in terms of reliable DPS except for SS Serena & Zygarde). Even if their innate Sync effect is not the most reliable, SS Korrina & Marshadow’s kit makes it as usable as possible, with their main limitation being Spectral Thief’s MP, which might not be enough for some battles. Good Form must also be carefully considered in order to get the most out of them instead of just slapping on the usual physical Supports.

Here, SS Korrina & Marshadow might suffer less from Spectral Thief’s limited uses due to the fast pace of the mode. Their strong Sync Nuke might be used to quickly deal with the center, while sides are reserved for the later Spectral Thief OHKOs or 2HKOs.

These stages will force Korrina & Marshadow to run their reload tiles on her Sync Grid, but don’t take this the wrong way: they’re still very potent here. A powerful Tech Sync Nuke is always useful for cleaning HP bars, while Spectral Thief’s secondary effect can nullify the potency of multiple Legendaries, like Cresselia and Latias. Fortuitous will also have time to build up Good Form, and SS Korrina & Marshadows’s self-sufficiency and gauge-efficiency means that they can generally afford skipping any Support that would be better used on other runs.

Extreme Battles aren’t too friendly to SS Korrina & Marshadow, even on-region. While they’re still a powerful offensive pair and Kalos is not very represented on the offensive side outside of limited units. Multiple targets, longer stage length, and frequent stat-drop immunities can often reduce SS Korrina & Marshadow’s efficiency to a lower level than usual, but their base kit is still acceptable. Off-region, she can actually compress the role of stat removal alongside crit buffs, but outside of that specific niche, she shouldn’t be used without the stat boost.

SS Korrina & Marshadow can’t make use of Good Form reliably here and Spectral Thief has limited MP, making her not recommended for this mode.

While SS Korrina & Marshadow have a decent output at ⅕. ⅖ can be considered rather important as it gives them Better Prepared 3 and, most importantly, Sync Reload 9, as they can’t get any MP back at ⅕. ⅗ is also very good, mainly offering SS Korina & Marshadow Rising Tide for Sync Nuke and Furious Brawn as a reliable DPS multiplier. In conclusion, ⅕ is not bad, but it’s strongly recommended ⅖ at minimum and, if it’s affordable, ⅗ is worth it too.

At ⅗, SS Korrina & Marshadow get Rising Tide, which makes their EX more potent. SS Korrina & Marshadow want to finish the stage with the minimal amount of Spectral Thief usage, so it can be a good investment to promote them due to her Sync Nuke that’s not very far behind the mighty Lear & Hoopa (who share the same multipliers, but arguably have a harder time preparing for their innate passive).

Critical Strike 2 is the generic option here like most offensive units - however, one interesting thing to note is that, due to SS Korrina & Marshadow’s high multipliers, this increment is not very large. If the user so desires, Head Start 1 can be used without too much of a loss if they think that the Sync Acceleration can be combined with other viable Sync Pairs from their roster.

SS Korrina & Marshadow is an offensive Ghost pair, so the first name is obvious: Sygna Suit Cynthia & Giratina will provide Ghost Zone for them, and can even be gridded to boost their Attack and Special Attack with Ghost Wish.

As for boosting stats, we have another clear winner: Sygna Suit Morty & Ho-Oh can give Korrina & Marshadow max Atk, Def, SpD, and Spe while also granting +3 Eva and Crit and +2 SpA, and all of that is just after the first Sync thanks to Morty's passives and the Trainer Moves from both. SS Morty & Ho-oh is also an excellent tank and provides great gauge support, making them useful beyond that.

As for more budget options, Caitlin & Sableye, Leaf & Eevee, and Elio & Primarina can all offer a good variety of boosts, including giving the last +2 Attack that Korina & Marshadow needs, and even benefit from having Dire Hit All + for the third unit, as they can’t buff crit themselves. If you lack all of those, then even Liza & Lunatone can be used for boost Attack, Sp. Atk, and Sp. Def.

SS Korrina & Marshadow is an extremely powerful Tech unit for a type that’s underrepresented outside of Master Fairs. Their damage potential is some of the highest in the game, although MP limitations might make you want to get dupes for them. All in all, SS Korrina is a good pull to have for most players, although she’s not without flaws and the banner might not be the best timing for players waiting on Anniversary units.