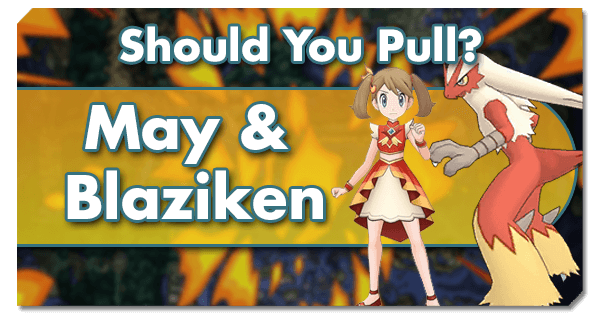 A powerful Fire-type Tech that can give a strong Sync Nuke, accelerate the Sync Move Countdown, and gauge support for the team.

May is no stranger to any Pokémon Masters player: after her initial introduction with Mudkip that could evolve into Mega Swampert to the general pool, she managed to get a seasonal outfit with Mega Lopunny and a Poké Fair with Mega Latias - which was even featured as the main unit of the 2.5 year anniversary. Now, May continues her streak with her fourth Mega Evolving Sync Pair. Mega Blaziken has long been awaited by the players, as its unevolved form was released pretty early alongside the Main Character, but there was one problem: while the fighting chicken is pretty well known for its offensive power and its former signature move Blaze Kick, our current Torchic  was a support. All of May’s Sync Pairs follow a pattern where they provide offensive presence alongside some supportive qualities, so how will she do with her fourth alt? Let’s discover together! (fun fact: May only took one more day than Lillie to go from her first Sync Pair to her fourth one, taking 562 and 561 days respectively).

Starting with her stats, SS May already makes a name for herself: 424 Attack that can be boosted by 1.2x with Mega puts her on second place for the stat, being tied with Sygna Suit Red & Charizard and Sygna Suit Serena & Zygarde, while 358 Speed that can also be boosted by Mega and makes Blaziken blazing fast. A bulk composed of 648 HP and 176 defenses is not anything special for a Tech unit, but compared to most Strikers (which SS May is pretty close to being), it’s better than most. Going into her moves, Blaze Kick is Blaziken’s former signature move and SS May’s main move. It’s a 4 gauge move with high crit chance - normally, this would make the move’s BP very low, but Blaze Kick’s 90% accuracy alleviates it a bit. Don’t get too excited though, as 140 is still on the low side for 4 gauge moves. Dire Hit All + gives some supportives qualities to SS May by allowing her to buff crit to her partners alongside herself. Low Sweep is a very weak 2 gauge Fighting-type move that lowers the opponent’s Speed so it’s best to ignore it. Her Trainer Move is Fired Up!, which is a 1 MP move that gives +4 Attack and +1 accuracy to fix Blaze Kick’s chance to miss while also applying Move Gauge Acceleration and reducing the Sync Move countdown by 1. SS May’s Sync Move is All About Us Blaze Kick, which, despite having the Mega BP nerf, still has an innate multiplier based on Defense debuffs to double its power.

SS May & Blaziken start their passives with Head Start 2 - in a similar manner to Lear & Hoopa, this is meant to be used alongside their Trainer Move to get a fast Sync by themselves. The second passive is Team Debut Dash 2, which gives +2 Speed AoE the first time the user enters a battle. The third passive is Defense Crush 9, making every move from Blaziken drop the opponent’s Defense. When Mega Evolved, all of their passives change: first, Fuel Economy 1 reduces the cost of all of SS May’s moves by 1 gauge with no penalty on their power, helping with the gauge. Propulsion 1 is a 20% chance to accelerate the user’s Sync countdown by 1 with any action, which can be situationally useful even if based on RNG. Finally, Defense Crush is upgraded into Defense Destroyer 9, which does the exact same thing, but gives 2 debuffs rather than 1 per attack.

So, SS May & Blaziken are an offensive Tech sync pair with good gauge efficiency and sync acceleration. They have a high damage potential, but must be set up for a bit to truly hit top tier numbers. Their support can be valuable for modes like Legendary Gauntlet, where crit and gauge supports are more valuable, especially if they add their own damage on top of it.

Here, SS May will mainly make use of her sync acceleration. The fast pace of the mode most likely means that she won’t get her full damage potential going, especially with multiple targets, but the fact that you get early sync buffs should help with it. Her Sync Move is also good for dealing with the center.

This is SS May’s best mode - a good amount of time to ramp up her multipliers, a bar-deleting Sync Move, and role compression on gauge and crit support makes the duo one of the absolute best for any roster.

Hoenn, while having good limited units, is still not the greatest for F2P players sometimes, so a great offensive unit is sure to help - even off-region, the sync acceleration, stat drops, crit buffs, and gauge support can be pretty useful. Although the gauge support might not be sufficient if she’s the sole source of it.

Head Start 2, Team Debut Dash 2, and a high crit chance move makes SS May pair very well with Red & Snorlax, achieving early syncs, decent gauge, and 100% crit chance on their main DPS move on top of Fierce Entry 2 also giving some Attack buffs. When not paired with them, SS May’s qualities are still decent, but don’t shine as much as some other pairs like Cyrus & Palkia.

SS May is a case where you either accept a ⅕ kit or commit to ⅗, as the ⅖ nodes are not enough by themselves. While it’s still a decently powerful set at base, ⅗ is recommended for the big boosts it provides to Sync, and partly to DPS too.

Due to the benefits provided from syncing with SS May and just how powerful the damage can be, EX is a strong recommendation for them - if you manage to pull, investing the power ups and spirits should be a priority, as the results are noticeable on the spot.

Critical Strike 2 and Weathered Warrior 3 are the easy picks here - the low amount of DPS multipliers does make the extra boost from WW3 notable compared to CS2 with Blaze Kick, but the added versatility of CS2, particularly on Gauntlet where SS May excels, makes it the superior option most of the time on top of being easier to roll. Head Start 1 and Adrenaline 1 could be used for higher sync acceleration strategies, but they’re pretty team specific and lack of an offensive Lucky Skill will be felt, so only do it if you have your strategies planned around them.

As usual for offensive Fire-type Sync Pairs, Sygna Suit Morty & Ho-Oh appear as the option that summons sun on top of boosting SS May’s Speed for Inertia and topping off her Attack boosts. Maxie & Groudon will also summon sun on top of extending it and provide offensive presence while not competing for Sync, but beyond that, also has a key advantage: Hoenn Pride will give both of them a 35% DPS multiplier due to both being Hoenn physical attackers, making them a standout pair. Leon & Charizard and Sygna Suit Red & Charizard are both options for a secondary Fire-type damage dealers, and while Silver & Ho-Oh and Hilda & Emboar, despite having lower DPS than the first two, can provide stronger physical AoE Sync Moves due to SS May’s Defense drops on top of benefiting from Team Debut Dash 2 due to their Speed based multipliers.

Gloria & Urshifu - Rapid Strike, despite not being Fire-type, are still a good partner, as they can combine their own Trainer Move for more Sync Accelerations and boosting SS May’s Defense and Speed debuff based multipliers. Finally, Red & Snorlax can form a powerful combination with SS May by providing more Sync Acceleration at the same time as crit buffs to avoid extensive setup turns and also can use Rock Smash for more Defense drops for SS May on top of Super Effective Up Next, while Raihan & Flygon will trade the crit buffs, Defense drops, and a more reliable tank for the capability of summoning sun and stacking Physical Move Up Next.

So, while Sygna Suit May & Blaziken are very powerful, they also come at an unfortunate time: not only is Dojo Gloria & Urshifu still available with a similar kit, they’re also generally more efficient too. Despite Fire-types being very abundant, this shouldn’t be too much of a problem for SS May, as her off-type capabilities are unquestionable, but still, it’s probably worth at least waiting as SS May will be up for not only all of the second half of August datamine, but also the start of the Anniversary datamine.