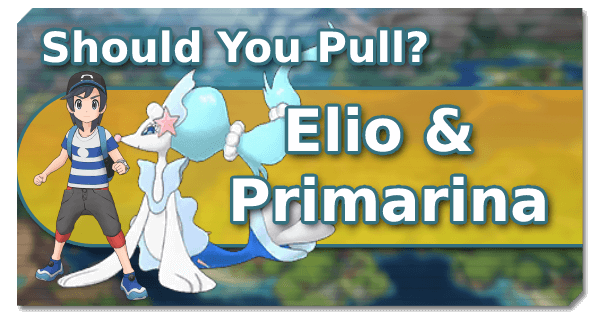 A flexible support pair capable of doing most jobs to varying degrees, but not really dominant in any one role.

+Able to buff most stats and potentially mess with the opposing team with stat drops and Sleep.

-Jack of all trades, master of none.

Alola! Elio, one of the two protagonists from Pokemon Sun and Moon, is coming to Pasio along-side the Water Type Starter Pokemon, Primarina. This is a support unit that tries to do just about everything at once:

And they succeed in what they try to a fairly large degree. With a wide assortment of buffs and advantages, they can join most teams and fill holes with ease. However, they also find themselves as a jack-of-all-trades, master of none. Most of their buffs are incomplete or difficult to activate in some way, meaning they’re best at filling holes rather than acting as the all-in-one buff unit. In this regard, they can actually be somewhat useful in dual-striker setups, where they can fill in offensive holes, support both Physical and Special attackers at the same time, and even harass the opposing team with various disabilities thanks to Sing and their grid’s effects. The main issue here is the fact that their only attack, Sparkling Aria, is very expensive for a Support unit to use, so Elio & Primarina may be forced to rely on spamming Sing on most turns in order to not slow down the sync move counter, even if the entire enemy team is already asleep.

Elio & Primarina have the advantage of being able to slot into many different teams with ease thanks to their wide buff profile. The ability to put the opponent to sleep in particular can be valuable here, though they may struggle to find a niche where they’re not outclassed by another unit in some meaningful way.

Elio & Primarina really want to use their skill to provide offensive support, and without it they’re fairly lackluster. They can help out by spreading Sleep with Sing and garnering heals as a result, but it’s still probably better to look elsewhere for a Battle Villa support.

Their best use here is to focus on providing support for a dual-striker setup with the goal of stomping out the opposing team as quickly as possible. The prolonged nature of these fights has the potential to wear Elio & Primarina down before the end, but they’re still solid for dual-team strategies.

Most Legendary Arenas call for a very specific gimmick, meaning Elio & Primarina’s generalist nature may not play well against many opponents. Still, the ability to put one opponent to sleep when you’re generally only fighting one opponent is well known for its effectiveness!

Elio & Primarina genuinely appreciate the recent Sync Grid update, as they will need to tailor their grid to benefit their team.

These are generally the most important nodes on Elio & Primarina’s grid:.

Sadly, you’ll note that most of the “good” nodes are locked behind ⅗. This means that ⅕ and even ⅖ basically just support Elio & Primarina’s base kit to varying degrees. This isn’t “bad”, but it does leave a lot of potential power on the table for most players.

For Lucky Skills, the tried-and-true Vigilance ensures maximum longevity, and ensures that Primarina’s Special Defense buffs aren’t simply ignored. If Elio & Primarina are used as a secondary Support unit, then Defense Crush 2 can be very useful when combined with Sparkling Aria’s AoE damage, or Troublemaker 1 can be picked up in order to increase the accuracy of Sing. Stoic 2 can also be great for patching up Primarina’s lower physical Defense, but it leaves the Soloist Pokemon open to a random Critical attack.

Because Elio & Primarina can do so many things, they work well with numerous team comps. However, some synergize better than others. New Years Lance & Gyarados appreciate their wide set of buffs that can save a substantial amount of HP that Gyarados would normally sacrifice to its Trainer Move, while Primarina appreciates the fact that it can potentially enjoy Potion support as a result. The same can be said of Lance & Dragonite, who have an abject lack of self-buffs at their disposal. Champion Iris & Hydreigon can also take advantage of Elio & Primarina’s buffing and stat-lowering capabilities to power up their moves, while the longevity that the resulting Attack and Special Attack drops provide make Primarina substantially bulkier.

As for providing support for Primarina & Elio, they generally only want three things: Accuracy,  Healing, and Defense. The latter two are easily provided by Skyla & Swanna in spades, making it the pair’s best supportive partner if you don’t intend to rely on Sing. Lillie & Clefairy can boost Accuracy and finish the offensive buffs that Elio & Primarina leave at +4, and Sabrina & Alakazam can boost Accuracy and offer healing while temporarily boosting the team’s physical bulk with Barrier, as well as taking care of team Critical Rate alongside a slew of other effects.

Elio & Primarina could be a great asset to newer players, as they can be used in many scenarios very effectively. However, their utility drops as other sync pairs that are better suited to fill specific support niches become available, such as Hillbert & Samurott with Physical attackers or Sabrina & Alakazam for Special attackers. As stated before, they can have utility with a dual-striker setup, but their overall niche is a bit shallow. For these reasons, it’s probably best to just skip this banner and wait to see what next month has in store. Besides, they’re going to enter the general pool after this, so you’ll probably pick them up naturally on a future Pokefair.