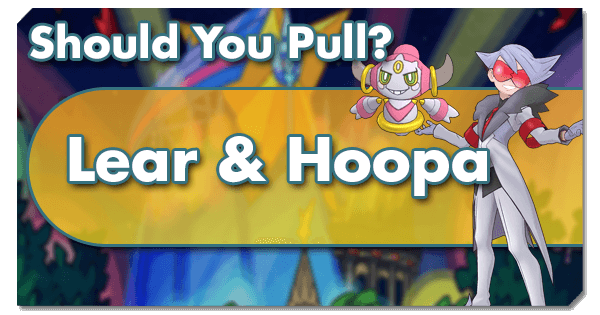 The Prince arrives at last, backing up his reputation with high Psychic Type damage, an impressive Sync Nuke, and even a bit of Tech-like utility.

It’s time at last! Master Lear has finally seen fit to graciously step away from his well deserved and glorious throne to give aid to the poor plebeians that have come to take part in his exclusive tournament! Alongside his partner, the vaunted Mythical Pokemon Hoopa, he has come to pave the way to absolute victory and will ensure a level of greatness surpassed only by His Majesty himself! Your gems, which are the exclusive currency of the island of Pasio, are destined to be given in tribute to Prince Lear in order to garner his royal favor!

-This message has been paid by the Pasio Tourism Board.

All joking aside; Lear & Hoopa are genuinely outstanding. As of right now, they’re entering the game as the hardest-hitting Psychic Type Sync Pair in the whole of the game, surpassing poor Giovanni & Mewtwo mere weeks after they were given their expanded Sync Grid. So what exactly can they do? Well, first up they have the basic X Sp. Attack skill for a good, old-fashioned Special Attack boost, then they have their trainer move, Follow My Lead! This (bloated) skill grants Gradual Healing to Hoopa and all allies, a whopping +3 Critical Rate, Stat Reduction Defense to the allied field of play, and even -1 Sync Move Countdown… Which we’ll definitely be talking more about soon! It’s a great skill that’s offset by a single MP, though most of the time 1 use is enough to get the job done. Next up we have Hyperspace Hole. This attack is a 4-bar Psychic Type move that never misses. The base power of this move is admittedly a bit low for its cost when compared to similar moves, but Hoopa’s Sync Grid and high Special Attack can offset this drawback. Finally, we have Snatch, which can be used to steal an enemy’s stat boosts and also ensure that their built in Sync Nuke, which activates if the target has no stat boosts, will hit for maximum damage. This move can be remarkably important to Lear & Hoopa, as should be obvious as we arrive at their skills.

The passive skills for the Prince and the Djinn… oh my. They all basically work towards the same goal, and what a goal it is.

And here’s where we discover the most unique aspect of Lear & Hoopa’s strategy. In the game’s story, Lear has been haunted by his inability to use Sync Moves with the various Pokemon that he’s pulled out and tossed aside like used tissues from battle to battle. But now that he has Hoopa and actually can use Sync Moves, he wants to go all in on them!

If you’ve paid attention to our Should you Pull articles, you’ll frequently see that sync countdown skills and grid tiles are generally considered moot points or niche choices for most sync pairs. Well, they’ve just found their niche! After using his trainer skill, Lear cuts one entire cycle off of his first sync move, and then has an outstanding chance to do so again for his second. With proper support and the correct Sync Grid build, Lear & Hoopa also have one of the absolute strongest sync nukes in the game. This, combined with the high damage that Hyperspace Hole has to offer, make Lear & Hoopa into a military-grade glass cannon of a unit.

So it’s established that Lear & Hoopa have a lot going for them. But do they have any issues? Well, yes. For one, their speed is pretty low for a sync pair that relies on a 4-bar move for damage. This can be remedied with some proper team building, and can even be helped out with Snatch given how common Speed boosts are on many stages, but it does mean that a bit of care has to be given to ensure that moves aren’t missed along the way. Second is their low bulk which, while not as low as Giovanni & Mewtwo, does leave them vulnerable to strong Sync Moves in particular. If using them, putting down the opposition quickly can be very important. Honestly, that’s about it. Lear & Hoopa are very solid all-around, and can leverage tremendous offensive pressure without much effort.

So how do Lear & Hoopa play out in each major game mode?

If a stage calls for Psychic Type damage, it’s actually calling for Lear & Hoopa to take it down. It’s also here that access to Snatch can be very useful, as many stages love buffing and tend to stop at very specific points, making the best timing on the move very predictable. It might be best to avoid opponents with passive stat buffing skills, though.

A 4-bar Striker with low speed and high reliance on skills to hit hard isn’t exactly conducive to the Villa, though Lear & Hoopa’s ability to quickly and reliably tick down the Sync Move timer can be helpful. They’re okay choices if paired with Prof. Sycamore & Xerneas, in particular.

The power of snowballing Sync Buffs and Sync Nukes can’t be understated, and with proper planning Lear & Hoopa can be very formidable. The main issue here is the fact that many Legendary Arena bosses will buff themselves in some way at the start of each stage and/or have passive buffs, which makes keeping peak Sync Move damage a struggle.

Theme-skills weren’t kind to Lear & Hoopa. They don’t have much to their name, and don’t even have an assigned region. They could be useful in the upcoming type-based version of this mode, though.

These are generally the most important tiles on Lear & Hoopa’s grid:

Next are the tiles that are nice to have, but are either niche or not worth going out of the way for:

So what’s the Lucky Skill of choice for a Striker that leans into sync moves? Say it with me; Critical Strike 2.

Outright, the single most important partner that Lear & Hoopa can have is Bianca & Musharna. Psychic Terrain raises Hoopa’s damage to near-cataclysmic levels, and is one of the factors that genuinely sets them apart from the competition. Beyond these two, the third slot is largey open to the demands of any given stage, but keep in mind that Bianca & Musharna really appreciate Critical Rate support in order to truly shine. Sabrina & Alakazam are always top picks for Special Sync Pairs that require offensive support, and can be used to round out a Hoopa+Musharna team beautifully. Skyla & Swanna can tank well, boost team Speed and Defense which also has the side effect of playing into Rising Tide even more, and can even be used for a quick Support EX boost early-game. Serena & Delphox are famous for their ability to practically shut down the opposing team with ease, and also have the advantage of encouraging the opponent to use their buffs early since they can’t actually attack, which makes Snatch a more effective tool. Just use caution with this strategy, as having the opponent asleep right before Hoopa is about to use its Sync Move could coax out a buff of some form, leaving the player the choice between launching a sub-par Sync Nuke or delaying the Sync Move to expend a use of Snatch. The list goes on from there, as the previously mentioned duo can open up numerous team building options for their 3rd slot.

So are Lear & Hoopa worth trying for? Yes, but probably not right now. They take the Psychic Type crown and they have some fun tricks with a downright cataclysmic Sync Nuke, But Giovanni & Mewtwo are ample for most game modes that Lear & Hoopa excel at. We are also on the very brink of the two-year celebration, which will likely introduce one or more game-bending Sync Pairs. For these reasons, it’s advisable to skip Lear and nab him in future reruns. But for those who do want to run the risk and drop some gems right now, it’s definitely worth the investment!