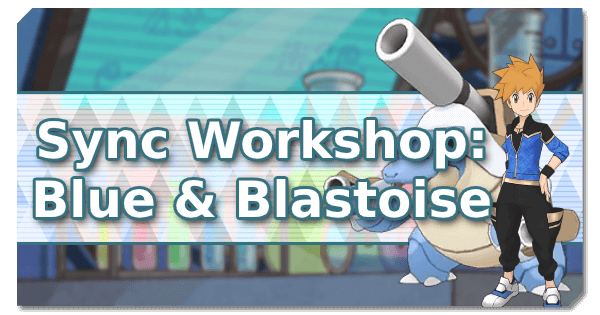 Sygna Suit Blue & Blastoise is the game’s premier tank sync pair. With huge stats and outstanding defensive and supportive options, they can fit on many teams and genuinely excel in their role. Their newly expanded grid is very focused in what it does, and it is exceptional in that regard! The Kanto ChampionTank grid supports Sygna Suit Blue & Blastoise by making them even more of a catch-all tank with supportive power to spare. The Hydro Cannon Tank grid is more focused and niche, but it provides superior offensive power and repeatable sync move countdown support, which is situationally useful if played to its strengths. 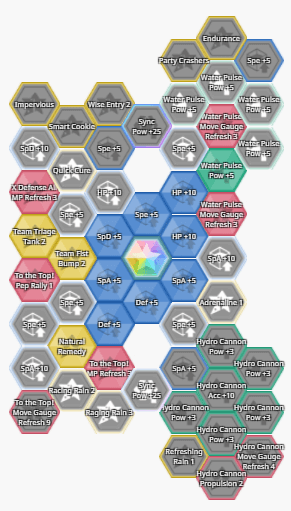 This grid setup can work in just about any battle, as it exemplifies everything that makes Sygna Suit Blue & Blastoise such an amazing support unit. Healing, speed boosts, MP and move gauge refreshes; it’s just plainly hard to go wrong with this setup as it’s basically great everywhere. If you need a tank that can also buff just about everything, then this grid should suit you perfectly. It can tank through multiple late-game stages of the Battle Villa if played right, provide longevity in the Legendary Arena, anchor any stage of the Champion Arena, and can also power through most Full Force battles with ease.

Sygna Suit Blue & Blastoise is one of the most self-sufficient tanks in the game and can slot into just about any team, but their main issues are their limited physical defense buffing capability without MP refreshes, their low speed, and their lack of immediate healing. Amazingly, all of these issues are patched up perfectly by Skyla & Swanna. Misty & Starmie are also great partners, as they provide reliable special defense boosts, evasion support, an additional layer of passive healing, and even a bit of immediate healing. On top of that, this pairing also triggers their Type Skills, which raise the whole team’s base HP. 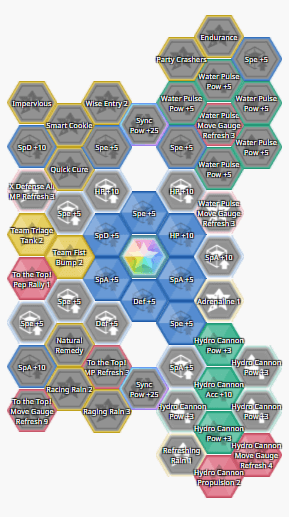 Hydro Cannon is a powerful attack in its own right, and leaning into it is a fairly simple matter. Team Triage Tank 2 and Team Fist Bump 2 are first as they are just amazing skills to have, and To the Top! Pep Rally is also picked up in order to support the high gauge cost of Hydro Cannon. Next, two Hydro Cannon Power+3 nodes and Hydro Cannon Acc+10 are picked up for a bit more power and to ensure that Hydro Cannon has 100% base accuracy. Hydro Cannon Move Gauge Refresh 4 is next, as it can keep this strategy rolling, and Hydro Cannon Propulsion 2 is last, as it gives good odds of dropping the sync counter multiple times over the course of a given battle.

This grid is a bit more limited and focused than the previous, but it does have its niche. It’s good in co-op battles, where long turn lengths can leave extra bars unspent after a while if relying on Water Pulse. This grid not only pumps out higher damage for these scenarios, it also grants a freely repeatable chance to count down the sync counter, which is potentially very powerful. In single player, this grid requires speedy partners and/or speed support to work properly, but its ability to repeatedly count down the sync counter can be situationally great.

You want Vigilance on Sygna Suit Blue & Blastoise. It prevents random high damage attacks from cutting into their walling capabilities and ignoring their buffed defenses. Fast Track 2 is also somewhat useful on the Kanto Champion Tank grid, as Sygna Suit Blue & Blastoise are likely to attack frequently with Water Pulse, and this can help patch up one of their few weak points. Still, Vigilance is generally better.