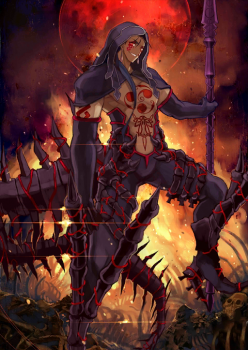 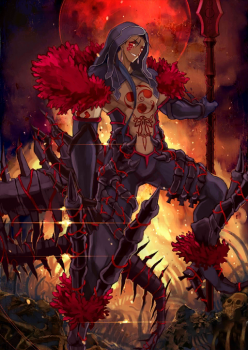 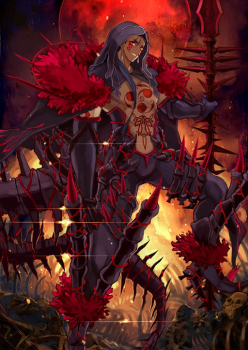 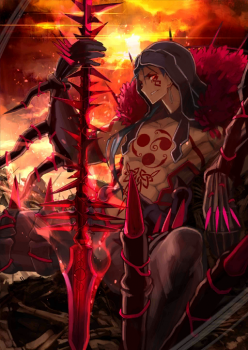 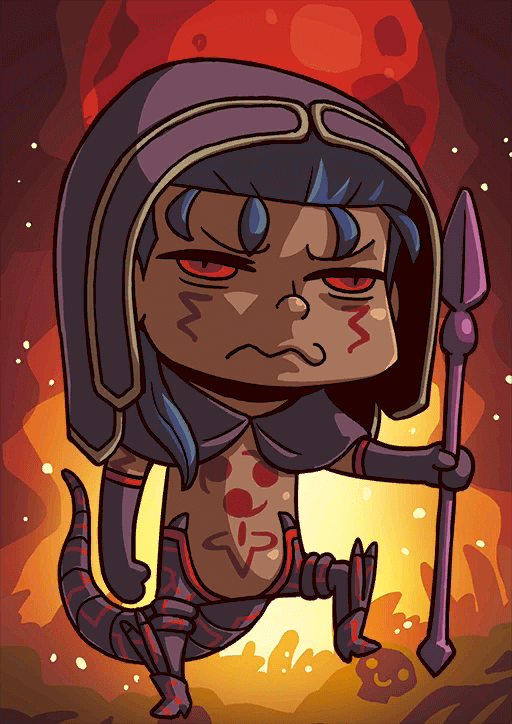 Madness of the Spirits A

One-Man WarWhen equipped on Cu Chulainn (Alter), Increase own NP damage by 30%, and Revive with 20% HP when defeated (1 time).

When Queen Medb bestowed her wish upon the holy grail for a ruthless version of the Child of Light, the result was a cold conqueror, the mad king Cu Chulainn (Alter). True to his description of being an uncharacteristic Berserker, Cu retains his incredible survivability while gaining significant Buster-based offenses from his Berserker class.

Cu Alter's high survivability is still the stuff of legends, despite his Berserker class. Coming with a two-hit Evasion in Protection from Arrows, Battle Continuation, defense buffs, as well as critical chance and attack debuffs on Madness of the Spirits, his unprecedented staying power is exceptional even when compared to non-Berserkers. What truly sets him apart from other Servants, however, is his considerable offensive power - normally unexpected from a Servant with such a defensive skill set. Thanks to a combination of an extremely high attack stat, a triple Buster deck, Madness Enhancement, and an attack buff built-in to his Noble Phantasm, Cu Alter is capable of dealing large amounts of damage over time.

These qualities, however, do not mean that Cu Alter is perfect. His deck composition means that in a team he has trouble charging his NP quickly, which makes a good support ally essential for charging his NP in time. In addition, powerful enemies with teamwide attacks or ones who can bypass his Evasion will be able to nullify a large portion of Cu Alter's high durability. Finally, his lack of direct steroids apart from his NP means he doesn't possess the on-demand performance boost of his peers, which can be problematic when damage is needed immediately.

Nonetheless, Cu Alter is an extremely powerful Berserker who can survive the most brutal enemies, and is a top performer for some of the most difficult fights in the game. For some encounters, this mad king doesn't even need allies, and will coldly destroy the enemy by himself.

While Cu Alter is well-suited as a general Buster Servant and can fit well into any Buster-based composition, he is also one of the most prolific solo Servants, capable of tearing up some challenging encounters all by himself. One doesn't even need to own a Cu Alter of their own to solo the appropriate fights, or raise any specific Servants in support.

All that is needed for any Servant to solo are two level 1 Servants with a taunt: generally a Leonidas and a Georgios. In Cu Alter's case, activate his Protection from Arrows, and then rotate the two taunts on turn 1 and 2, letting one Servant taunt at a time and die. On turn 3, the Servant will be alone and in Cu Alter's case, he can churn out massive damage with constant Buster Brave Chains. With the help of Mystic Codes such as the Atlas Academy Uniform, Cu Alter in particular can survive for many turns while the enemy charges his NP via his high Berserker defensive NP gain.

For Cu Alter, survival will depend on a Master's ability to rotate his Protection from Arrows, Battle Continuation, his NP, and the equipped Mystic Code's abilities to successfully survive as long as it is necessary to achieve victory. Having maxed out skill levels to reduce cooldowns is key.

Protection from Arrows is one of the best defensive skills, as hit-based Evasion will not disappear until it’s fully depleted. This means that this skill will never be wasted except if Masters use it while his Evasion hits haven't yet been used up.

Madness of the Spirits also applies a Critical Chance Down debuff on the target, greatly reducing the risk of stray critical hits, which can be highly important against higher-tier bosses. Meanwhile, Cu Alter’s Battle Continuation skill acts as a clutch, buying time for his other skills to come off cooldown. Due to its long duration, Battle Continuation can be used early and actually come off cooldown again if timed right. This is especially potent if Cu Alter is soloing.

With a triple Buster deck, a high rank in Madness Enhancement, and a high attack stat, Cu Alter is able to dish out damage at any time, something further reinforced by the Berserker class’ wide range of effectiveness and 1.1x damage modifier.

With built-in attack and defense buffs, Curruid Coinchenn essentially functions as Cu Alter’s damage-increasing skill, allowing him to perform highly powerful Brave chains. As mentioned above, the defense buff, when used with the rest of his kit, allows him to stack defense buffs rather easily.

As with most Berserkers, Cu Alter suffers from a difficulty to create Arts chains or access his single Arts card. However, Masters can counteract this with smart usage of his hit counts as his Buster and Quick cards do generate a decent sum of NP gauge when a chain has been initiated with an Arts card. In addition, his defensive NP gain is very high thanks to his class, which is very noticeable against high hit enemies or when he is soloing.

As Cu Alter’s biggest damage-increasing buff is tied in to his NP, he has difficulty dealing major burst damage without external support when it is not accessible. His own naturally low star weight also makes it noticeably more difficult to support him via Critical Damage as well without an overflow of critical stars. Generally, Cu Alter grinds the opponent down over time rather than smashing them immediately.

Cu Alter's overall high survivability is still mainly tied up in Protection from Arrows, as his defensive buffs and debuffs only serve to partially neutralize his vulnerable Berserker typing. Enemies who strip him of buffs or can pierce his Evasion will be able to kill Cu Alter relatively quickly.

Cu Alter often functions as the linchpin for some of the most difficult quests. Masters are therefore highly advised to invest in all of Cu Alter's skills, as the cooldown reduction often proves essential for survival. A single turn delay on Protection from Arrows may end up in Cu Alter's demise. Battle Continuation is his least potent skill however, and Masters may decide to pass on maxing it in the short term.

With limited access to steroids of his own, the selection of Cu Alter's Craft Essence greatly impacts his performance. Luckily, Cu Alter has great synergy with a vast selection of CEs. For general performance, Buster Up (stacks better with his NP) and Attack Up (stacks better with just Madness Enhancement) work very well for use with his basic command cards and NP. In addition, Starting NP Gauge is naturally a great choice for farming or launching an NP quickly. Finally, Hit-based Invincibility and his Bond CE are both potent choices.