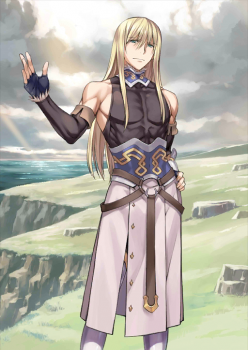 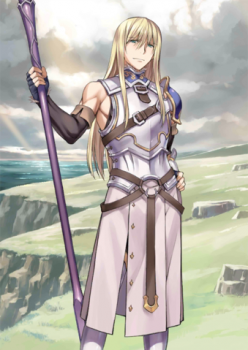 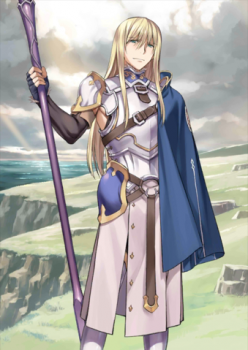 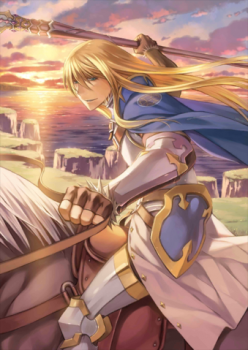 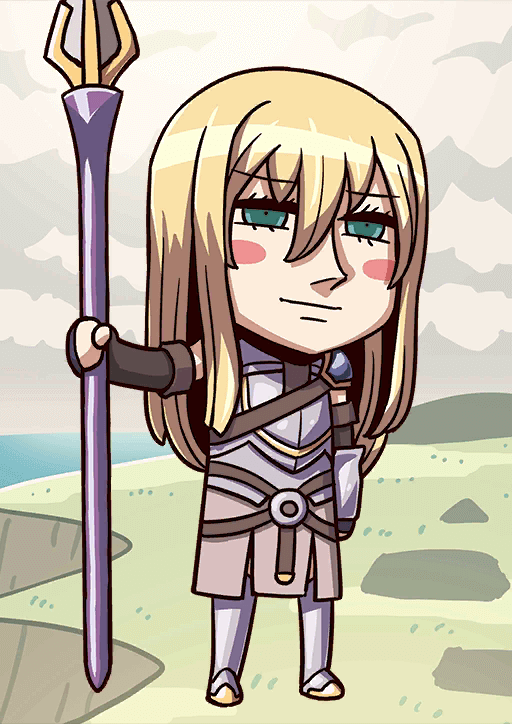 Replaces Clairvoyance B; upgrade via Rank Up 1.

Trouble with Women A

Apply Evade with chance to succeed on each hit (1 turn).
Apply Target Focus to self (1 turn).
Decrease own Charm Resist against [Female] enemies by 80% (3 turns). [Demerit]

Apply Evade with chance to succeed on each hit (1 turn).
Apply Target Focus to self (1 turn).
Decrease own Charm Resist against [Female] enemies by 80% (3 turns). [Demerit]
Increase own NP Gauge.

Replaces Trouble with Women A; upgrade via Rank Up 2

Mac an Luin A

When equipped on Fionn mac Cumhaill,
Increase Arts Card effectiveness of all allies by 10% and NP damage by 10% while on the field.

Fionn used to have a reputation for being a really bad Servant, to the point where some would jokingly call him a Rare Prism. Fortunately, a set of well-placed buffs has brought Fionn back to a position of strength. While he’s not the best at rapid damage output, Fionn has a lot of defense and utility tools that can help his team survive for long periods of time, making him a good choice for difficult fights. He also has the potential to loop his Noble Phantasm with proper support, making him a good Archer-farming Servant once Altria Caster is available.

With all his buffs in play, Fionn’s primary claim to fame is his defensive value. Uninhibited Resplendence lets Fionn protect his entire party from single-target attacks for a turn, while Mac an Luin reduces the enemy team’s attack, keeping enemy damage under control. Fionn also has Clairvoyance (Beauty) to speed up the whole team by increasing the party’s Critical Star Drop Rate and NP Gain. Additionally, while Fionn’s normal attack NP gain is weak, his Noble Phantasm has strong NP gain, meaning he can use his NP multiple turns in a row under the right circumstances.

Fionn does have several notable weaknesses, however. As is typical of Servants with lots of utility tools, Fionn’s damage is quite low, as his only innate damage boost lasts just one turn. Fionn also has very low NP gain on his normal attacks, which means he will struggle to gain access to his NP without the help of support Servants. Furthermore, he has fairly long cooldowns, which means he has to wait for several turns after using his skills before he can benefit from them a second time.

Fionn has come a long way. Where he used to be one of the worst SR Servants in the game, Fionn now has a clear place as a defense-oriented Arts unit. What he lacks in damage, he makes up for in his ability to keep his team alive and moving. For difficult fights where survivability is the name of the game, Fionn is a strong damage-dealer.

Fionn’s Target Focus and Evade combination is a powerful form of defensive support, as it allows Fionn to protect his whole team from single-target damage for a turn. This can allow Fionn to protect his team against either single-target Noble Phantasms or dangerous critical attacks, both of which can potentially end an otherwise-successful fight. Fionn’s NP also reduces enemy attack, providing a bit of additional protection.

Clairvoyance (Beauty) boosts the entire party’s Critical Star Drop Rate and NP Gain. Not only does this help Fionn himself gain access to his NP, but it also helps support Servants use their NPs more frequently, which is important for defense-oriented teams.

Fionn’s NP gain on his NP is high enough that, with the help of supports, he can use his NP multiple times in a row. Altria Caster, in particular, makes Fionn a viable farming Servant, especially against Archer enemies.

While Fionn benefits from an NP Interlude, his only damage buff is both weak and short-lived. As a result, he may struggle to deal enough damage for Challenge Quests and farming, especially at lower NP levels.

Fionn’s normal attacks have unusually low NP gain. While Clairvoyance (Beauty) offsets this a little bit, Fionn still struggles to build his NP gauge without the help of NP charge skills and supports. He may have trouble building towards his first NP if he does not have a Starting NP Gauge CE.

Fionn’s skills have generally long cooldowns, especially relative to their effect durations. Fionn’s longest-lasting skill, Clairvoyance (Beauty), is active about half the time at max level, while his other skills are active 1 turn out of 7 and 1 turn out of 5. This means Fionn has to be careful with the timing of his skills, as he will have to wait several turns before he can benefit from the effects of his skills again.

Uninhibited Resplendence is Fionn’s best skill, serving as both a powerful survival tool and an NP charge skill. The dodge can fail at levels below 10, the NP charge effect scales with level, and cooldown times on defensive skills can be the difference between a win and a loss in a hard fight, all of which make this skill a high priority for leveling. Clairvoyance (Beauty) is a significant performance increase for Fionn and his allies and should be leveled second. Magecraft increases Fionn’s potential damage output, but the short duration makes it less appealing than Fionn’s other skills, so it can be saved for last. Masters planning to use Fionn primarily for difficult fights should take his first two skills to max level, but Magecraft can safely be left at lower levels. Masters planning to use Fionn for farming will need to max all three skills.