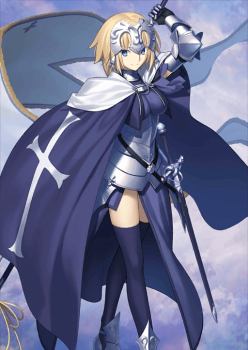 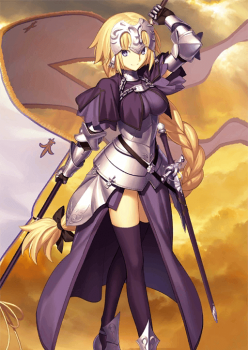 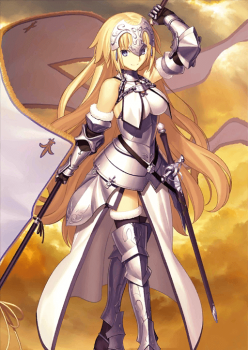 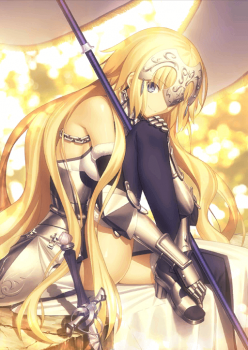 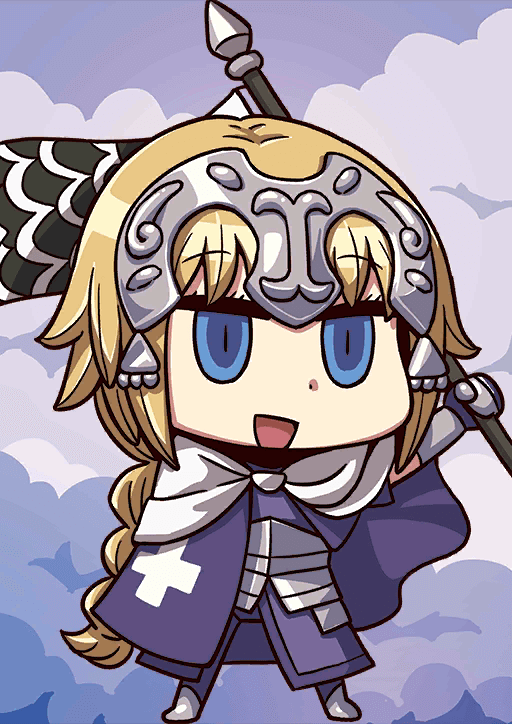 Restoration of the Radiant Holy Light A

When equipped on Jeanne d'Arc,
Increases Buster Card effectiveness of all allies by 15% while she's on the field.

The Holy Maiden that would save France in the Hundred Years War, the indomitable Jeanne d’Arc, carries her Holy Banner into battle as a beacon of hope. The Holy Banner grants Jeanne access to her powerful NP Luminosite Eternelle, which is prized for its rare party-wide Invincibility effect, allowing the party to survive boss NPs unscathed. Luminosite Eternelle also grants a decent chunk of healing and a minor DEF buff, and is further improved after Jeanne’s second Interlude replaces the self-stun component with a party-wide debuff cleanse. Jeanne is notably one of the tankiest Servants in the game, thanks to her high HP pool, her aforementioned NP, and her Ruler class’s resistances, which allows her to receive 0.5x damage from most enemies.

However, the rest of Jeanne’s kit pales in comparison to the power of her NP, as much of it is either situational or undertuned in values. While Divine Judgement A is a highly valuable stun, it only works against Servants. Where Revelation A’s critical star generation provides a useful extra splash of Critical Stars per turn and works particularly well in a critical set-up, the stars generated are rather low in number considering its longer cooldown compared to similar skills. Furthermore, with no damage-increasing buffs of any sort, she is also rather lacking offensively, though her triple Arts cards do help with charging her party’s NP bars through Arts chains. Lastly, until a Master completes her second Interlude, her NP has a weakness in the form of a self-stun that cripples continued use of her NP.

Despite her drawbacks, Jeanne is a highly valuable pick for the hardest of Challenge Quests, a testament to the significance of her NP. However, her weaknesses also mean that using her for farming or clearing content quickly is often rather inefficient, though new Masters with underdeveloped line-ups will definitely appreciate her help early on.

Jeanne’s party-wide Invincibility is tied to her NP, which means it is not gated by cooldowns like most party-wide defensive abilities. It also heals the party over two turns, and grants a DEF buff, though the latter is rather minor at NP level 1. After Jeanne’s second Interlude the NP loses its self-stun drawback and clears the whole party’s debuffs, making it one of the best defensive NPs in the game.

Jeanne is known for possessing the highest HP stat of all existing Servants. Coupled with the Ruler class’ defensive benefits, her stun, NP Damage Down debuff, and her NP, she can be expected to last a long time unless facing Avengers or Berserkers.

Bringing Jeanne in an Arts team not only benefits her allies, but also Jeanne herself, granting her more Arts chains as well as additional support tools she doesn’t have. With her high bulk and defensive NP, she works marvelously in stall-oriented teams, as the party-wide Invincibility greatly reduces the burden on other defensive supports.

While Jeanne’s lack of offensive benefits makes her less useful in farming situations, she is one of the most powerful defensive options for harder quests, especially after her second Interlude. Aside from bringing party-wide Invincibility, sustain, and debuff cleansing to the table, the hardest quests usually feature Servant bosses, making Jeanne’s Divine Judgement skill far more valuable.

Jeanne’s skill set is mediocre at best when compared to most other Servants. Divine Judgement, arguably her strongest skill, is a Servant-only Stun (albeit a very reliable one), while her True Name Revelation’s NP Damage Down is usually redundant due to the nature of her NP and the sheer damage of boss NPs, unless stacked with similar buffs. Lastly, while her Revelation’s star generation per turn can help critical damage dealers and her own performance, it does not provide nearly enough stars by itself.

Luminosite Eternelle’s Invincibility is extremely powerful; however, this also means that Jeanne struggles against enemies who possess Invincibility Pierce or buff removal, as the rest of her kit will likely not be enough to make up for the loss.

While Jeanne is able to provide a modicum of critical stars and her three Arts cards indirectly help her allies’ NP gain, she offers little in terms of offense otherwise. With a mediocre ATK stat, general lack of class advantage (except against Berserkers or Moon Cancer), and with no direct damage increasing buffs, the Holy Maiden is unsuitable for teams aiming to finish stages quickly. This severely limits her usefulness in everyday farming.

Before Jeanne’s NP upgrade, the two turn self-Stun it applies prevents her from using NP Brave chains. As a result, her NP gain is much slower in practice and she will potentially lock down a Master’s hand, which can be problematic in harder quests.

Jeanne’s skills are among the most expensive skills to level in the game, yet on the surface provide little extra benefit. Divine Judgement A should generally be leveled up first due to its importance in harder stages. Revelation A comes after, though it is possible to level this first if Jeanne is to be used for general content. Being an overall weak skill, True Name Revelation B can safely be left at level 1, though leveling it may prove useful in rare occasions or in very specific teams.

At max level, Revelation A grants slightly more stars than A Fragment of 2030, making it a decent skill for critical-oriented teams or just for general performance. However, the total amount of critical stars provided remains low and improves only a little per level. Additionally, Revelation tends to have a slightly higher cooldown than comparable star generation per turn skills. Jeanne’s rather high star weight also makes using the skill for support a tad more difficult, although the occasional critical hits she gets do improve her NP gain. Because of these reasons, it is generally better to level it second after Divine Judgement.

True Name Revelation B reduces the target’s NP damage by 30% when maxed. Unfortunately, this reduction is often not enough to save her party members from high damage  NPs. Fortunately, it can be used to reduce the amount of damage dealt by NPs of weaker enemy Servants, which is still an increase in the party’s overall survivability. It can be either ignored or left for last.

The high hit chance of Divine Judgement A’s Stun allows it to consistently hit Servants when maxed, even against those with substantial Magic Resistance. Aside from blocking incoming damage for one turn, this skill also works as a means to buy time to charge her NP. As such, the reduced cooldown often proves essential in harder quests, where a single turn delay can mean the difference between dying to an NP and being able to have a defensive measure in place.

Jeanne d’Arc’s Craft Essence picks generally try to help her NP gain or try improve her supporting capabilities, the former of which can be done by granting her CEs with either NP Charge per turn, Starting NP Gauge, NP Gain Up, or Arts Performance Up. For a more Offensive Support-oriented approach, Passive Star Generation helps to make Revelation reach some more acceptable numbers.