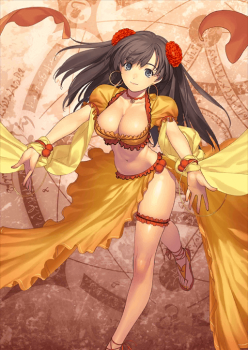 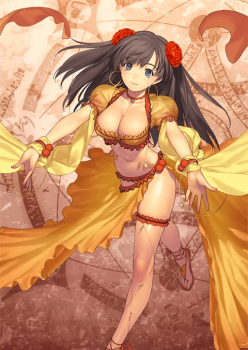 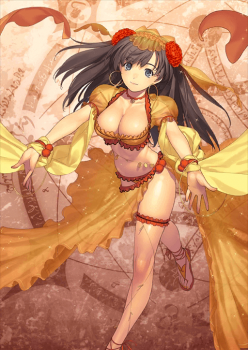 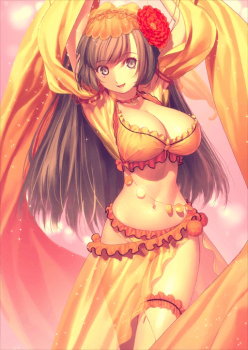 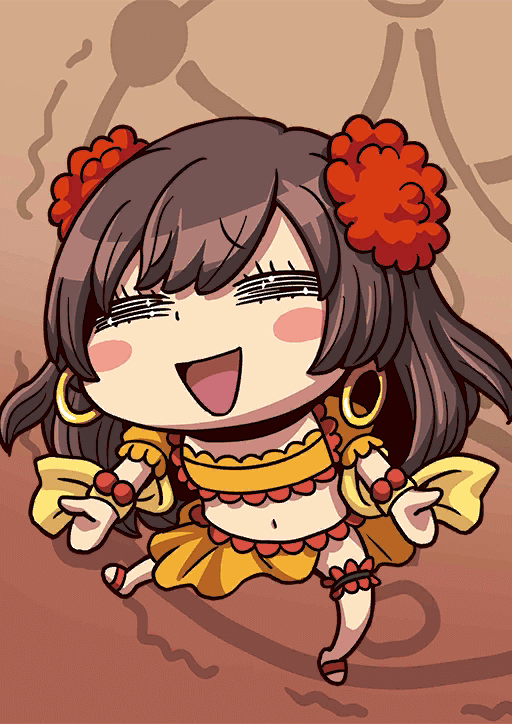 Where the Sun Falls on Vincennes EX

Chance to Charm all [Male] enemies (1 turn).
Decrease DEF for all enemies (3 turns).

Medium chance to inflict Charm for all enemies.

The Woman with Dazzling Eyes

When equipped on Mata Hari,
Increase NP gain of all allies by 15% while she's on the field.

Unlike her fellow low Rarity Assassins like Kojiro, Cursed Arm Hassan or Jing Ke, Mata Hari has a clear distinct role as a heavy debuffer/charmer. Unlike Servants like Stheno or Euryale who are more specialized in charming male enemies, Mata Hari can charm everything, from homunuculus to big tough dragon, but at the cost of lower success rate and next to no offensive capability whatsoever. Mata Hari also has three hefty Defense debuffs, two of which are teamwide debuffs which can help her teammates a lot in the right setup.

Mata Hari problems, however, are quite apparent. She has terrible damage output, isn't great at generating Critical Stars despite being an Assassin, and lacks any form of reliable survivability. Her skillset also does not work alone and require particular setups and teammates to take full advantage of her skills and thus are not the go-to choice for an Assassin slot against Rider enemies.

Mata Hari's main role is as a debuffer/charmer. Her low hit counts make her Espionage skill quite irrelevant. Of her remaining skills, Pheromone is available at the start and is a very nice teamwide defense debuff with a charm, so it is worth leveling first. Double-cross comes only after her Rank Up quest but it has good tactical value thanks to the Skill Seal and another defense debuff, so it should be leveled after Pheromone.

The female spy that was active on the hidden side of the world.
Mata Hari lived the strangest existence among all spies.
As a stripper, she conned military officers with her body until she was executed as a spy.

Mata Hari was doomed from the beginning of
her life. Her father forced the company he
worked for to go bankrupt, and cheated on his wife repeatedly. Her mother became ill from anxiety, and passed away when Mata Hari was 14 years old.

Her own marriage failed because of her husband's violent tendencies, alcohol abuse, and cheating.
As someone who spent most of her adolescent years fulfilling the egocentric desires of men, being a spy who toyed with men was well suited for her...
Even if it meant that execution was waiting at the end of that tunnel.

Espionage: A++
This skill does not conceal her presence, but masks her presence so no one will
feel like she's an enemy. At a rank of A++, unless her own allies expose her, it's impossible to realize that she's the enemy.

[Mata Hari]
Rank: A
NP Type: Anti-Army
Woman with Eyes of the Day.
The materialization of the legend, a brainwashing Noble Phantasm.
With an alluring dance, it paralyzes all thought processes, and turns you into a puppet.
It targets Servants with no mental resistance skills.

If she has a wish for the Holy Grail, it would be to create a happy family with someone she loved.
Of course, she knows how weak she is as a Heroic Spirit, so she already given up on such an impossible wish.