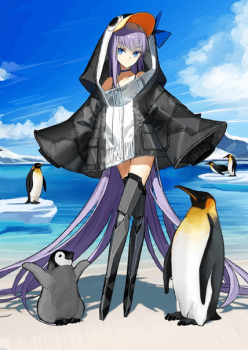 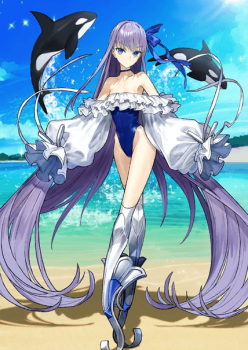 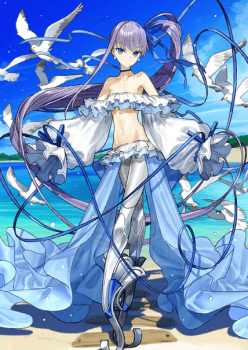 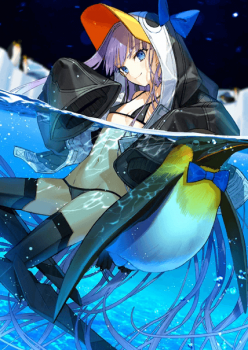 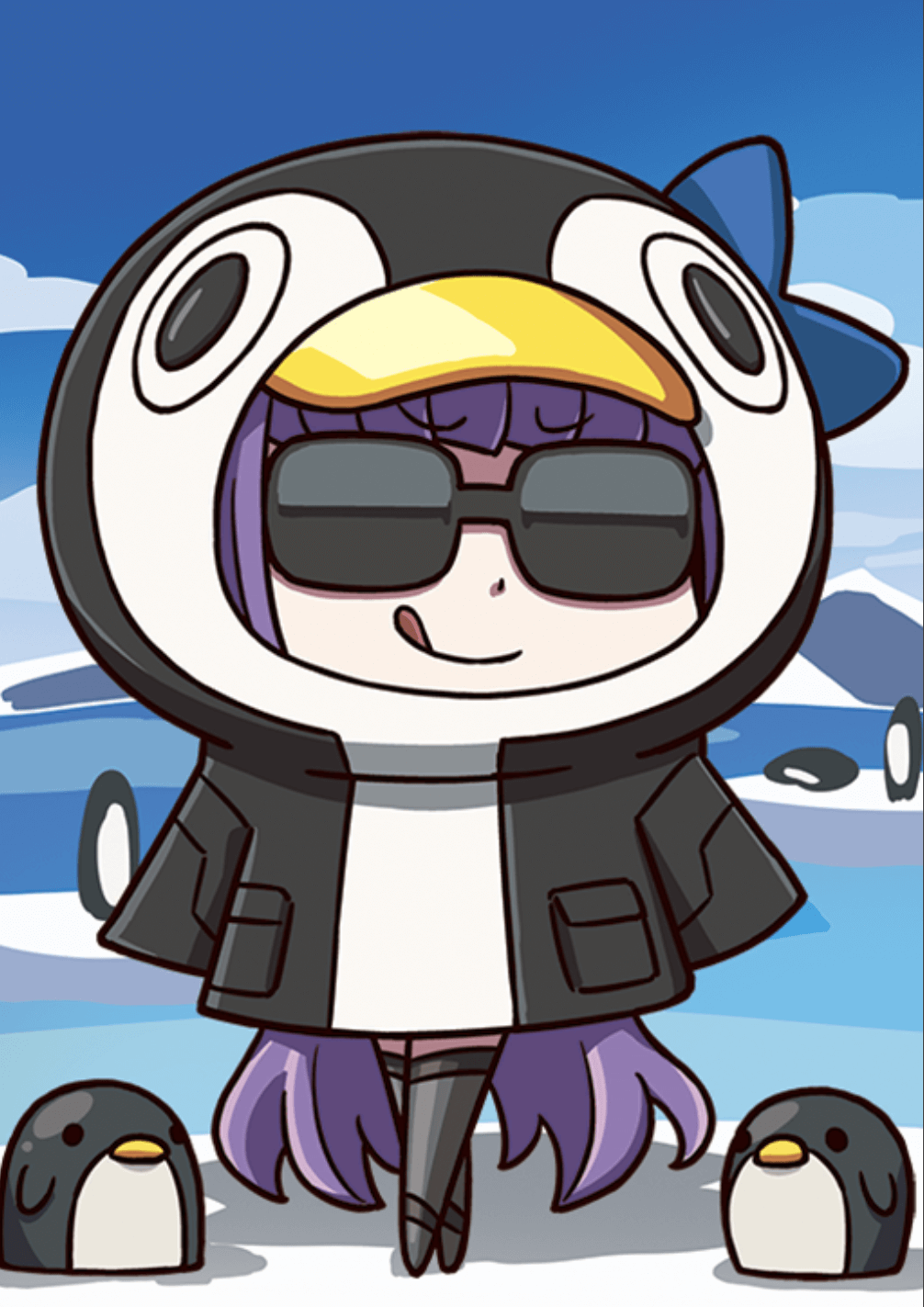 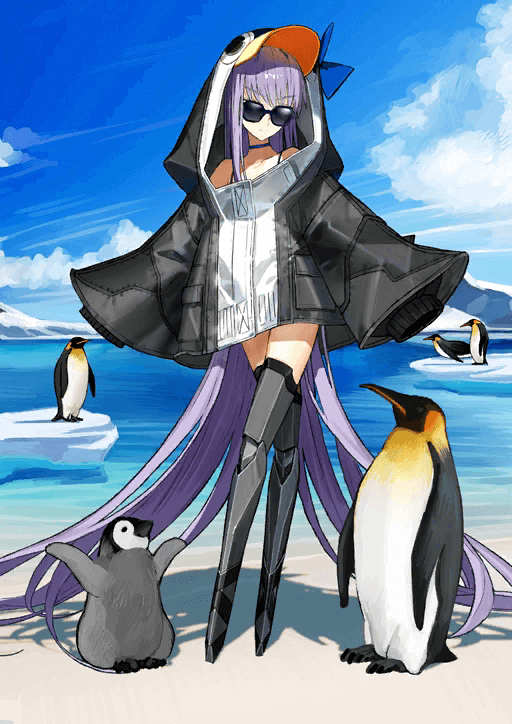 When [near water], remove Evasion buffs from all enemies. (Activates first)
Deal DEF-ignoring damage to all enemies.

“Rejoice, for the most beautiful swan in the world has arrived!”

Who could this mysterious Alter Ego be? Ready for the stage, Mysterious Alter Ego Lambda (or, alternatively, Summer Meltryllis) debuts as a Lancer, despite her stated name. AoE Arts Lancers were a rarity for a long time, and Summer Melt is the beginning of the end of that trend. She has an odd skillset that makes her difficult to use in slow Arts teams, but once Altria Caster arrives, she comes into her own as a strong Arts Servant for both challenge quests and farming.

Melt’s biggest strength is her ability to loop her Arts Noble Phantasm, Blue Summer Palladion. In addition to dealing DEF-ignoring damage, it generates a healthy sum of stars, and can also remove Evade buffs when the field is Near Water. Melt has strong refund on her NP, plus a potential 60% NP charge skill in Melt Envy, which lets her use her NP repeatedly, especially with the help of Altria Caster. Melt also has Swan Lake, an unusual Arts Effectiveness buff that lasts for more turns than it takes to cool down, effectively giving Melt a permanent damage boost that occasionally spikes higher. Complete Fluidity gives Melt some useful utility to increase her stability as well, with an Invincibility effect, Buff Removal Resistance, and the ability to set Near Water field to enable further specialized effects.

In exchange for these powerful tools, Melt has some unfortunate negative synergies with stall-oriented Arts teams. Her NP charge skill drains NP gauge from her allies, which makes it more difficult for support Servants to use Noble Phantasms that protect or strengthen the team. Additionally, while Melt Envy gives Melt strong damage output for a turn, her damage is less impressive outside of her burst turn. Melt also has relatively weak NP gain on her normal attacks, which means she may struggle to gain access to her NP without the help of NP charge skills.

Melt is a Servant who is ahead of her time at release. She’s an Arts unit intended for farming and fast challenge quest clears, which makes her difficult to enable in the year immediately following her release. She does have strong skills and a good NP, though, so dedicated Masters can find good ways to use her before Altria Caster releases, and once Altria Caster is available, Melt becomes one of the better farming units Arts has and an all-around valuable pull

With an AoE Arts NP, good NP refund, and a potential 60% battery, Melt has everything she needs to use her NP multiple times in a row when properly supported. She is particularly useful in this respect for dealing with Archers, both in tricky farming nodes and in challenge quests, and her ability to function in this regard only increases when Altria Caster releases.

Swan Lake provides an Arts buff that lasts for 5 turns on a 4-turn cooldown, which means Melt should almost always have at least one Arts buff active. This helps Melt’s overall NP gain and damage, letting her contribute effectively even while her other skills are on cooldown.

Melt has a mix of several situationally useful utility effects. Buff removal resistance can keep a Servant alive even against dangerous enemies that remove defensive buffs before powerful attacks. Melt’s NP pierces defense buffs, and it also removes evasion buffs on Near Water fields, which makes her damage hard to block. To make that better, Melt herself can set Near Water field for 3 turns, ensuring her own NP is maximally useful and potentially assisting allies who also benefit from that field.

Blue Summer Palladion generates at least 20 stars upon use, ensuring a healthy sum of stars that can be otherwise difficult to come by for an Arts damage dealer. In combination with the Crit Star Gather buff on Melt Envy, she can capitalize on the generated stars rather consistently, putting her Independent Action passive to good use, while also boosting her NP gain on post-NP turns. She does lack buffs to Critical Strength in her own kit, however, and benefits greatly from supports that provide boosts to Critical Strength.

Prior to Altria Caster’s release, Arts teams typically favor slow, safe strategies. With her focus on damage and looping, Melt does not fit naturally into these types of teams. Melt Envy, in particular, causes problems, as it drains NP charge from Melt’s allies, which can make the skill unappealing in teams that are relying on Merlin or Tamamo NPs to keep the party alive and moving. Furthermore, the nature of the NP Drain means that for her to reach the maximum NP Gain on Melt Envy, it requires her allies to have at least 30% NP Gauge each. If all allies have 0% NP Gauge at the time of her move usage, she will not gain any NP Gauge herself.

Low Damage Outside of Burst

Melt has strong AoE damage on the turn she uses Melt Envy, but the attack boost on Melt Envy only lasts one turn, so Melt may struggle to output strong enough damage outside of that turn, especially at lower NP levels and without optimal supports.

Melt’s NP gain on her Arts and Quick cards is unusually low relative to her card deck. Once Melt gets going, her NP refund and NP charge skill help to offset this, but especially early in a fight, Melt may have trouble gaining access to her NP without help.

Melt Envy is Melt’s most powerful skill, and all of its bonuses scale with level. It should be leveled first in order to maximize Melt’s damage output and NP gain potential. Swan Lake is a persistent increase to Melt’s overall performance and should be leveled second so that Melt can fully benefit from it’s better-than-100% uptime. Complete Fluidity gains the least from levels and can be leveled last, but in cases where Melt needs the Buff Removal Resistance, Masters will want to have this leveled. Ideally, Masters should try to bring all of Melt’s skills to max level, as each skill relies on either the shortened cooldown or the increased effectiveness to work fully as intended.

[JP] LB 6.5 "Death and Revelation World Traum: Life and Death of a certain Illusion" Pre-Campaign
Pre-campaign to run from May 18th to June 30 to get players ready for LB 6.5 releasing…
[JP] 5* Rider Constantine XI
https://www.youtube.com/embed/_yqghaAhCq0 https:/…
Erice? Male or Female? What's the difference?
SALUTATIONS! I was wonderin once again, Erice (The new Event Crossover Waifu) seems…
Sherlock Holmes re roll help
I really want Sherlock Holmes. I have no 5 star servants and I am on Oceanious. I…
Evil bones Farmers Gang
So I recently counted how many bones i needed and found our that I needed 2000 evil…
Read More