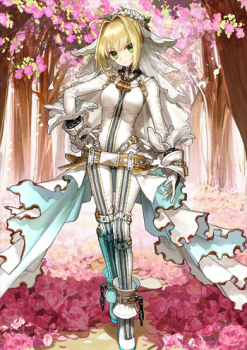 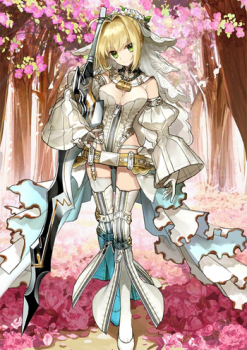 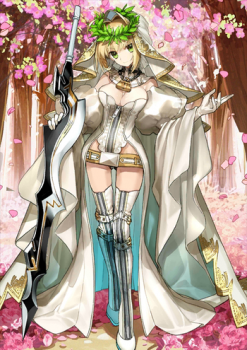 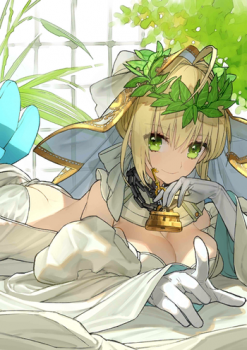 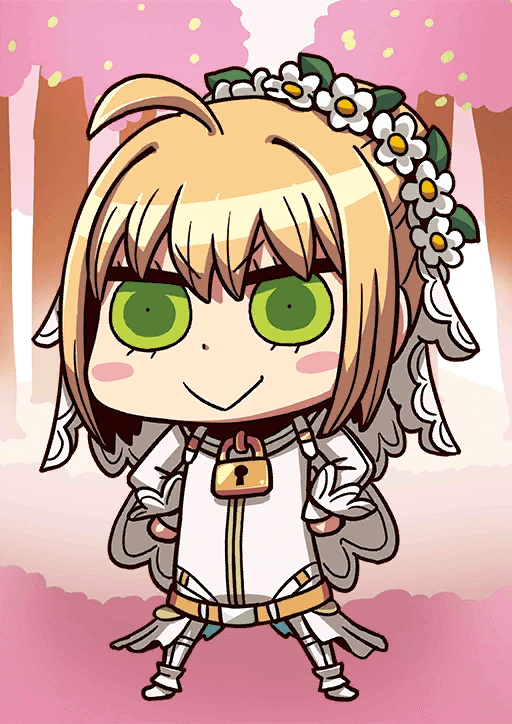 Stars for the Sky A

Stars for the Sky EX

Flowers for the Earth A

Love for the People A

Love for the People EX

When equipped on Nero Claudius (Bride),
Increase Arts Card effectiveness of all allies by 15% while on the field.

“You want to know why I changed into a wedding dress? Fufufu. Do you really have to ask? You know me! I did it because I wanted to!”

The lively emperor of roses also comes in a bridal package, complete with a pure white outfit, a matching sword, and even a unique Bride alignment! Nero Claudius (Bride) - or Nero Bride, as she prefers to be called - is one of the best examples of a hybrid damage dealer, one able to support her allies in various ways while still maintaining a considerable offensive presence as an ST Arts Saber.

The defining aspect of Nero Bride’s kit is that all three of her skills are targetable, letting her either assist allies or boost her own performance as needed. All of these skills also have standard, easy-to-use effects and generous modifiers, which are worthwhile for any kind of team. Offensively, Nero’s martial side is built on her solid base stats and balanced card deck, as well as her single-target Arts NP, the damage of which competes well against other similar NPs after its upgrade. Her NP’s defense debuff, Flowers for the Earth’s attack buff, and Stars for the Sky’s NP gain buff all allow Nero to serve as an effective damage dealer through her NP spam potential. Love for the People rounds off her kit by providing a targetable heal as well as a defense buff, offering some amount of survivability to the team.

Having such a flexible kit also comes with a cost, however, as both Flowers for the Earth and Stars for the Sky come with steep base cooldowns, which results in a longer offensive downtime. Additionally, while Nero’s third skill provides some semblance of staying power, she lacks a hard defensive tool, creating a dependency on other defensive supports. Nero Bride’s final drawback is that each of her skills only affect a single target, often making her less powerful as a support for difficult quests compared to Servants with teamwide support skills and better cooldowns.

On the whole, Nero Claudius (Bride) generally leans even more to the offensive side after her NP upgrade and is a powerful Arts Servant in her own right. Even so, the flexibility brought along by Nero’s kit still allows her to fill the support role convincingly when needed, and she particularly excels in Arts teams in which both her roles can be used to great effect.

Not all buffs are brought via Rank Ups or Interludes! Nero Bride’s updated animations included a boost to her Extra hit count, thus improving her overall performance indirectly.

Nero Bride possesses a great NP gain baseline thanks to her solid Arts cards and Stars for the Sky. With the aid of external Arts buffs, Overkill or a lucky critical hit, her NP Arts Brave chains are often able to instantly recharge her NP gauge, which grants her substantial damage potential thanks to Flowers for the Earth’s 3-turn attack buff. Furthermore, as Nero’s NP’s burn and defense debuffs last for an astonishing 5 turns, she can potentially stack more than one of each on a high-health boss, increasing the team’s overall damage dealt.

All three of Nero Bride’s skills contain straightforward, easy-to-use effects that can be used to aid anyone in the team, allowing her to allocate their benefits to whomever needs it most. Furthermore, thanks to the skills’ high modifiers, Nero proves to be an effective offensive support despite her own damage dealing penchant. It is thus not uncommon to see her being used to great effect in unconventional compositions, especially those revolving around offensive NP spam.

Stars for the Sky can grant up to 45% NP gain to any Servant in the team. NP Gain buffs with such high values and duration are incredibly rare, and until the release of Paracelsus’s Rank Up, are not accessible to most Masters. Furthermore, NP Gain boosts stack multiplicatively with any Card Performance buffs, which makes them essential to many NP refund farming strategies performed by the likes of Mordred (Rider) or with the help of Skadi. Thus, Nero Bride functions as a key component in some Arts and Quick-based setups that require an NP Gain buff to fully refund an NP.

This role has only become more pronounced with the release of her Rank Up which bestows an additional 30% NP Charge unto Stars for the Sky. As a result, Nero Bride becomes an even more powerful option for any NP looping strategies, especially for Masters without access to an MLB Kaleidoscope.

While both of Nero’s offensive skills last for three turns, they also suffer from longer base cooldowns. As her damage dealing potential and support are greatly reduced when these skills are not available, they should be utilized carefully, especially at lower skill levels or with less optimized teams.

Nero Bride has no way to completely mitigate or delay incoming damage, and while Love for the People’s defense buff makes her durable enough to survive normal hits (if it is cast on herself), she is unlikely to survive highly damaging boss NPs.

Outside of Fax Caelestis’ debuffs, all of Nero’s skills only benefit a single target, which limits the viability of her support role in longer fights. Fortunately, this is not as big of a concern when she is used as a damage dealer, though it slightly hurts her relative performance against other Arts damage dealers who do have teamwide support capability, such as Altria (Archer).

All of Nero’s skills benefit greatly from being leveled, and those seeking to use her intensively should aim to max all of them as soon as possible. It is recommended to get her first two skills to level 6 at the very least, reducing their cooldowns and increasing her offensive uptime.

As an Arts NP spammer, Nero Bride benefits the most from NP Damage Up CEs, followed by Arts Performance Up ones. Meanwhile, Passive Star Generation is a great option for when she is used as a support, while Critical Star Gathering CEs help her spam more NPs in Arts-critical teams. As a buffer, Nero Bride can be used to great effect with Chaldea Combat Uniform’s Order Change ability, and thus she is a great holder of CEs with on-entry effects.