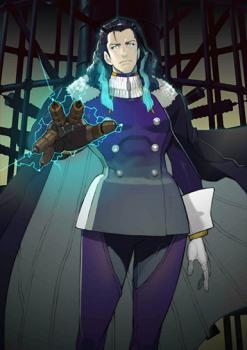 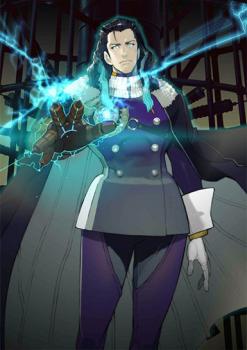 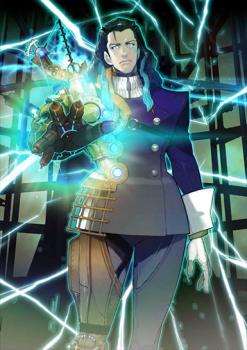 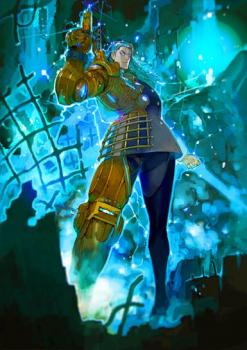 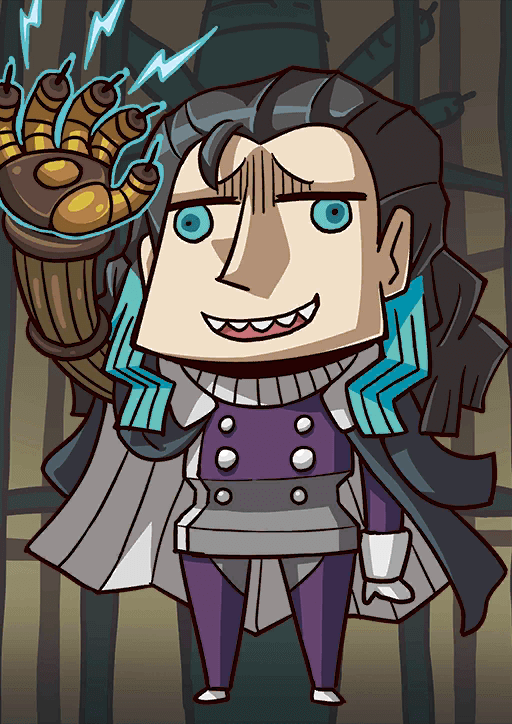 Increase own NP Gain (3 turns).
Increase NP Gain for all allies except self (3 turns).

Deal heavy damage to all enemies.
30% chance to inflict Stun on all enemies (1 turn).
Reduce your HP by 500. [Demerit]

Legend of Mankind - Advent of Lightning

Deal heavy damage to all enemies.
40% chance to inflict Stun on all enemies (1 turn).
Reduce your HP by 500. [Demerit]

Legend of Mankind - Advent of Lightning

When equipped on Nikola Tesla,
Increase NP damage of all allies by 20% while on the field.

"No one can stop our righteous lightning. None but that miscreant Edison..."

With his ability to easily charge up his NP, Tesla can reliably use System Keraunos multiple times in one battle. As this NP benefits from an Interlude and from strong innate damage boosts, the overall damage output from Tesla's NP cycling is quite high. Furthermore, System Keraunos gains a damage boost against Heaven or Earth Servants, pushing Tesla's AoE damage against these Servants to the point of being among the best in the game.

In exchange, Tesla's damage outside of his NP is fairly unimpressive, as the boosts that apply to his normal attacks are quite limited. Additionally, the NP Damage and Defense buff on Inherent Wisdom have a chance of failing, hurting Tesla's overall sustain and damage output.

As a whole, Tesla's damage output is quite strong, especially against his favored enemies. His damage is mainly concentrated on his NP and his buffs aren't entirely reliable, but in the right team he's a terrifying AoE damage-dealer.

With Galvanism giving him additional NP generation as well as the 50% NP charge from Pioneer of the Stars, Tesla can consistently unleash his Noble Phantasm. Furthermore, Tesla's high Star Weight ensures he can critical hit easily while under the effect of Galvanism. While the NP itself deals a good amount of AoE damage, Tesla’s ability to use it constantly gives him monstrous damage output.

With an innate Attack buff and NP Damage buff on Inherent Wisdom and an Interlude-boosted NP, Tesla's NP damage output is high even without his Heaven and Earth bonus damage. Additionally, Pioneer of the Stars allows Tesla to ignore Invincibility and Evasion buffs, while his total burst damage output can sometimes be further boosted by executing an NPBB chain.

Against Servants with the Heaven or Earth attribute, Tesla's NP damage is exceptionally high, surpassing even most ST Archers. His niche encompasses a broad group of Servants, and when it applies it makes Tesla an excellent pick for difficult fights involving multiple enemies.

While Tesla's NP damage output is quite high, the only boosts he has for his normal attacks are the Critical Damage buff on Independent Action and the relatively weak Attack buff on Inherent Wisdom after Rank Up. As such, Tesla's damage is heavily concentrated on his NP, and if he is unable to use his NP consistently his damage will suffer.

The NP Damage buff and Defense buff on Inherent Wisdom have a high chance to succeed, but they do have a 20% chance to miss, which would lower Tesla's effective damage output and sustain. When the NP Damage buff fails, Tesla's damage is much less impressive, especially outside of his Heaven or Earth niche. Meanwhile, if the Defense buff fails, Tesla is remarkably fragile with only his Guts to keep to him alive and his NP slowly reducing his health.

All of Tesla’s skills synergize well and should ideally all be leveled eventually. Tesla's main purpose is to use his NP as soon as possible to aid in farming and clearing more difficult content. Hitting the 50% NP Charge benchmark on Pioneer of the Stars is especially essential as it opens up many more different CEs for Tesla to use and still NP quickly. Inherent Wisdom meanwhile mainly serves to further boost Tesla's damage output, while Galvanism helps to keep the NP spam going.

As Tesla's damage output is concentrated on his NP, he wants CEs that help him deal more NP damage. This means CEs that provide Buster Performance Up or NP Damage Up are ideal. Additionally, given Pioneer of the Stars can instantly give 50% NP, Tesla also benefits immensely from hybrid CEs that give Starting NP Gauge.