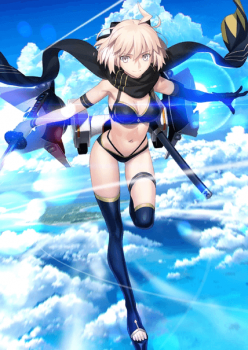 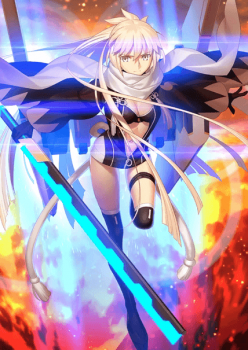 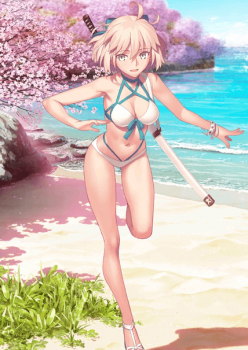 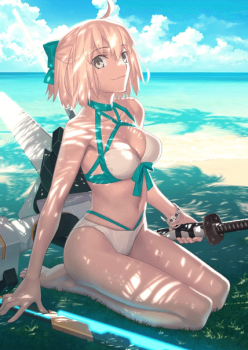 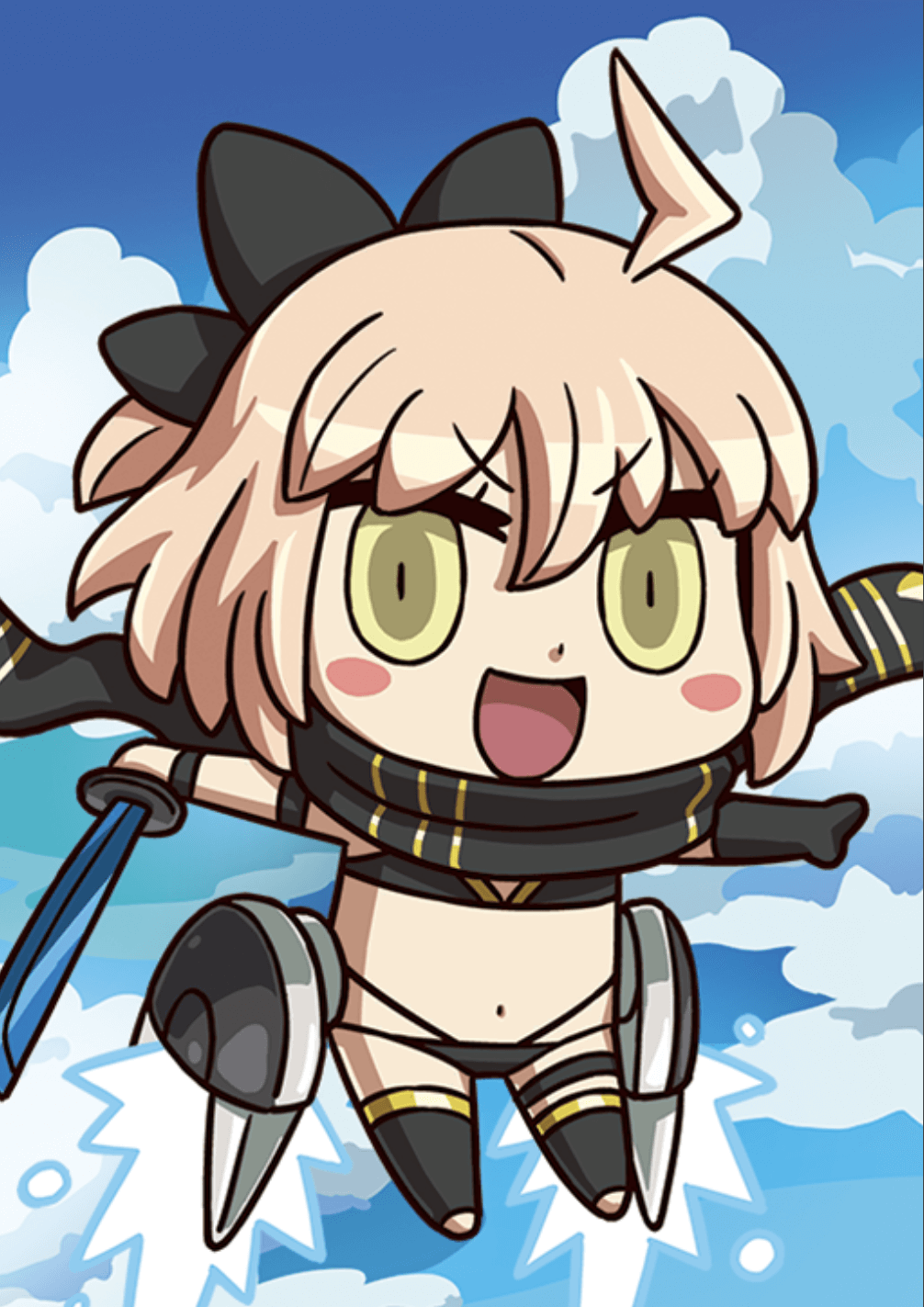 Self Star Gather Rate Up Self Buff Removal (Defensive) [Demerit]

Self Quick Up Self DEF Down [Demerit]

Entity of the Outer Realm E

Increase your Debuff Resist by 15%.
Reduces your Instant Death Resistance by 10%

Increase your Critical Star Drop Rate by 7.5%.
Reduces your Instant Death Resistance by 10%

Deal damage to all enemies.
Remove Defensive Buffs from all enemies.
60% Chance to inflict Stun on self (1 turn). [Demerit]

Beyond the Blue Sky

When equipped on Okita J Souji,
Increase Quick Card effectiveness by 15% & increase Critical Strength by 15% & reduce defense by 10% [Demerit] for all allies while she is on the field.

“The invincible Okita-san in a swimsuit has come!”

How long have Masters clamored for the one great Okita to appear in a swimsuit? Their prayers have been answered with an AoE Quick Assassin who not only is super daishouri, but also has a kicking jet pack to make up for her years of denied swimsuit-ism!

Okita is a great asset for raw AoE Assassin damage, having the highest damage output of any 4-star AoE options. With her M Drive EX’s huge Quick buff and Mind's Eye (J) A-’s NP damage buff, she manages to stack substantial boosts for significant damage. She’s also amazing with crits, having a one-turn Crit Steroid on Jet Tennen Rishinryu A+ which when combined with Skadi buffs can decimate an enemy on Quick crits. She’s also a potential Skadi looper thanks to her wonderful refund potential.

Unfortunately, she’s only a potential looper for one reason: a 60% chance to stun herself every time she uses her Noble Phantasm. She’s also quite squishy as her skills are designed against self-defense in favor of attack. That’s what happens when you use a jet pack to attack, of course.

Masters who are in need of an AoE Assassin would do well to get Okita. Those who are not should anyway, because Okita-san daishouri!

There are so many boosts to Okita’s damage that it’s a surprise her output isn’t higher still. She is gimped a little by the Assassin’s 0.9x damage moderator, but her damage is quite respectable with two major buffs going off at one time on her second and third skills. Even better, it lasts for three turns!

Very few Servants have a skill which can provide a 100% Crit damage up buff, but Okita does. It only lasts for a single turn, so Masters usually want to use this when the cards line up properly to maximize her damage.

Using a MLB Kaleidoscope, 2 Skadis, and a Waver, Okita can refund enough to loop for 3 turns. In practice, Masters should assume she’ll only use her Noble Phantasm on turns two and three though, because...

Okita stuns herself on her Noble Phantasm 60% of the time. In practice this is more like 45% because of her passive, but it is still a pain. If any enemies survive her initial NP hit, if the stun occurs, then she will be unable to do subsequent card hits, which can at times be problematic. Although this does not affect the refund from her NP itself or her ability to NP the next turn (and rather instead affects her ability to form Brave chains / gain further refund from card hits within the same turn as her NP), in waves with two smaller enemies and a single larger enemy, this has the potential to cause issues.

Okita does have an evasion on her second skill, but the rest of her kit is the exact opposite of durable. Her third skill reduces her defense up to a whopping 50% by the third turn, making all enemies hit her like a Berserker would, and her first skill removes a defensive buff from her. She truly is a glass cannon.

Okita’s skills are designed to make her powerful, but they come at a cost. All increase her damage output in some significant way, and Masters should prioritize leveling them according to whether they want to use her for Criticals or NP damage.

Masters primarily want to get early Noble Phantasms out, so Starting Gauge CEs which provide some NP Gauge at battle start so she is closer to unleashing her NP are generally best. If a Master can support her, a Mixed Starting Gauge / Damage CE helps her out. If Masters are willing to give up on the idea of easily looping her NP for three turns in exchange for reliability, a Debuff Immune CE can negate her Noble Phantasm’s self stun demerit.

Look to the sky and behold the girl in a swimsuit soaring among the clouds. The mumyou's light blasting through the skies is...who, exactly?

Her name is Okita J. Souji of the Shinsengumi. This girl uses the mysterious techniques of the Jet Tennen Rishinryu, a sword style from a backwater galaxy. Apparently she flies around Vegas in her jetpack to hunt down outlaws.

"Jetpack User's Manual: Secondary Form"
A special espionage device that fully extracts her potential and performance. Various functions fit for assassination such as a stealth mode and Wolf of Mibu-style instant assassination techniques are equipped.

This is a new type of jersey-style haori costume that combines the loose-fitting wear of a jersey and the stealthy zigzag pattered black haori. The Kiku-ichimonji Blade version β is included as an interchangeable part.

Still confused after reading all that? Don't sweat it. I don't know what's going on with this either.

Oh, also, there is supposedly a wonderful and invincible summer swimsuit Okita mode that completely conceals all her equipment. This is the recommended mode when going out to play.

The mysterious style that's been the talk of the town this summer has enabled Okita to wear a swimsuit, where the concept of the jetpack got mixed in there somewhere too.

Her personality is no different than her normal self, but her Class has changed from Saber to Assassin. She originally had high affinity as an Assassin from the get-go, so she is able to demonstrate combat power that is neither supreme nor lacking from her Saber form.

Perhaps because she turned into an Assassin, her aspect as an unfun man-slayer is pronounced in her secondary espionage form. Her life as a man-slayer, with her relentless and indiscriminate method of killing others and her enemies fearing and looking at her with contempt, is prominent.

Jet Tennen Rishinryu: A+
The lone swordswoman who has mastered the lone backwater galaxy's legendary sword style, Jet Tennen Rishinryu. It's also to be said that nobody else wanted to master it. That's all just space gossip, though.

The instantaneous velocity is ranked among the top ten...or maybe top twenty within the Milky Way. At least, I want it to be in the upper ranks.

Mind's Eye (J): A-
In addition to her instinctual sixth sense for evading danger and her natural inclination to detect it as well, her jetpack OS, called the MIBURO System, enables her to predict the immediate future, transmitting that information directly to her brain. But since she is an intuitive-type man-slayer, the whole thing can be kind of a hindrance sometimes.

M Drive: EX
A mysterious engine included in the operating system that simulates all types of battles against various outlaw ronin and anti-shogunate space rebels. While it's possible to draw out power that surpasses her body's ability whenever she goes into overdrive, it would cause her body to be dangerously vulnerable to collapse because of the extreme strain.

The miraculous single hit emitted by over-boosting the super MAKOTO DRIVE engine installed in the jetpack.
Extreme jet acceleration beyond the physical limitations of any person causes the three-stage thrust to execute at sublight speed, which results in its velocity consuming the surrounding air and induces an outrageous power output that swallows up and annihilates the target's surroundings, despite it being a single target attack.
Due to the over-the-limit load it puts on the user, it can cause incapacitation at random.

The lighthearted version of Saber Okita Souji's Noble Phantasm.
In order to exterminate the outlaw ronin rampaging amidst the summer sea, numerous warriors from the Shinsengumi, who all have the wrong idea, are summoned.
The basis for this Noble Phantasm can only be used by a Saber-class, and so the Assassin-class Okita cannot use this.
So when CAN this Noble Phantasm be used, then?

Allow me to explain! With her long-awaited swimsuit dreams finally coming true, Okita was excitedly running through the hallways when she accidentally collides galaxies with Heroine XX. Poor Ms. Okita then died...(but not really).

Oh no! An accident with an indigenous local...and even death!? This is definitely going to affect my approval for a bonus!!! In a panic, Ms. XX hastily built a life support device (really a jetpack) using parts she had on-hand, and as a result, a mysterious Shinsengumi girl was born. But in actuality, Okita was just unconscious, and inadvertently had the Servant Universe's mysterious technology installed to be reborn as a futuristic Shinsengumi warrior, all because XX goofed up.

Thanks to the life support device, her Weak Constitution skill was removed for a limited time, and as the device theoretically runs for over eight hundred years it enables her to have a super healthy body. However, Okita erroneously believed she had only three days left to live.

The sight of her running freely under the bright blue sky is, to a girl who was welcomed by the soft warm sun to disappear within the tumultuous age in which she lived, but a precious summer dream.

Of course, the turmoil and rift in space and time XX caused is only an enchantment that lasts but the duration of summer, and everything goes back to normal as soon as summer ends. Hey, that's good news, Okita.