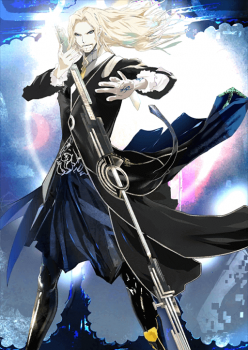 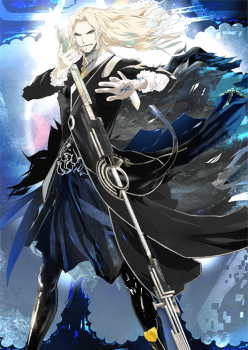 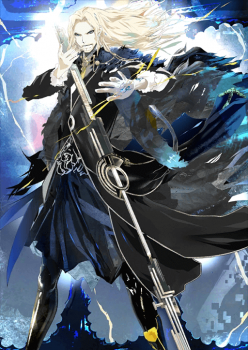 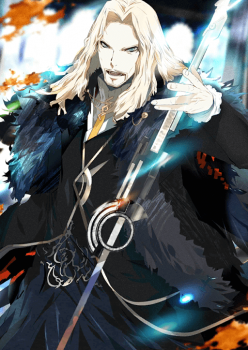 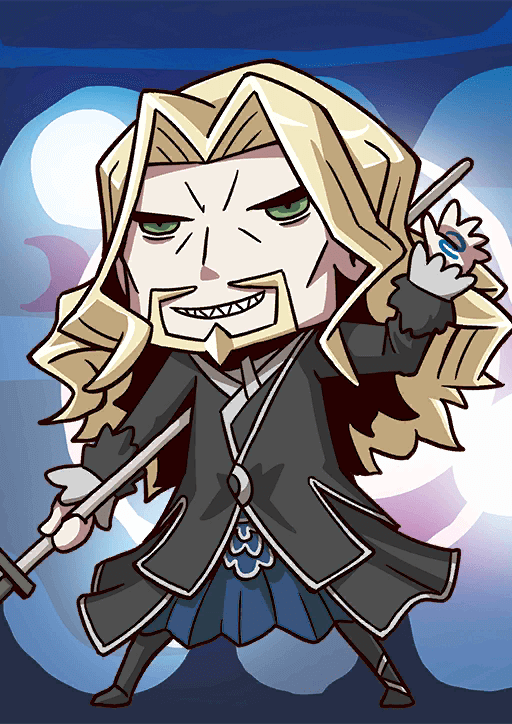 Chance to decrease a single enemy's NP Gauge by 1.
Increase own NP Gauge.

Legend of Dracula A+

Triumph of the Impaling Lord

“I shall stand and howl my name, cursed by the world.”

Vlad Tepes, once known as Lancer of Black and the Lord of Wallachia, is a tragic monster trapped into the legend of the world’s most famous vampire. Though he once fought against his infamy, Vlad now embraces his vampiric power as a durable Arts-focused Berserker.

Vlad’s game plan focuses on building up to and repeatedly using his excellent Noble Phantasm, Kazikli Bey. This strong single-target Arts NP grants him a good sum of Critical Stars (scaling with Overcharge) and refunds a significant amount of NP gauge thanks to its high hit count. Befitting his ruinous fate, he possesses Vampirism to help charge his NP whilst draining an enemy’s NP gauge. Morph helps him survive by boosting his Defense with very good uptime, but its true power only shines after its Rank Up. Then, as Legend of Dracula, it serves as a fantastic personal steroid, increasing both his Attack and Defense by up to 30% for 3 out of every 5 turns. Battle Continuation serves as his insurance policy by reviving him in case of death, and contributes to his deceptively tanky (for a Berserker) nature.

Though Vlad doesn’t fear garlic or holy water, the vampire has other concerns, most important of which is his awful base NP gain. Without the benefit of external buffs or frequent Arts chains, it is common to see Vlad unable to use his NP even once in a battle. Furthermore, he struggles to maintain a consistent performance without significant support, and even lacks any steroids until his second Interlude. Thus, Vlad is highly dependent on properly constructed Arts teams that boost his damage, survival, and NP-spamming capabilities. Lastly, despite his Defense and Guts skills, Vlad is still a Berserker, with the requisite defensive weaknesses, and will fall quickly if Masters are not careful.

The Lord Impaler requires a good amount of assistance from allies, especially to salvage his poor NP gain. However, if he gets that help in a well-constructed Arts team, he can deliver consistently strong performances and leave any foe a bloody mess.

Between his Berserker class advantage, 1.1x damage modifier, and the strong Attack boost on Legend of Dracula, Vlad can put out a high amount of damage through Kazikli Bey. With its high hit count and his Arts focus, Vlad’s overall damage scales incredibly well with external Arts and NP Gain buffs, which enable him to use his NP regularly.

Decent Survivability for a Berserker

Despite not having self-healing or an evasion skill, Vlad is still one of the bulkier Berserkers in the game, due to the persistent Defense buff from Morph/Legend of Dracula. Battle Continuation serves as a last-resort method to survive fatal blows, and Vampirism’s NP drain slows down enemy NP charging to buy time for defensive skills or to simply kill the enemy. His focus on NP Drain and Defense Up for defensive effects works very well with Arts supports who can provide more of the same effects. When stacked, Defense Up can render any almost enemy attack toothless while successive NP drains can prevent NPs from firing indefinitely..

Even with his low base NP gain, Vlad gets a significant amount of NP charge back from using Kazikli Bey thanks to its 10 hits, especially if he can Overkill with it. Once he manages to use it once, his path to doing so again is much easier. In addition, post-Interlude Kazikli Bey will produce at least 20 Critical Stars on use (increasing with extra levels of Overcharge), which greatly improves the chance for critical hits on the next turn. Note that Vlad may not be able to fully take advantage of them himself thanks to his very low Berserker star weight.

Vlad suffers from one of the lowest base offensive NP generation rates in the entire game. Even with his two Arts cards, he will need Arts chains or direct NP charge from allies, or sometimes both, to use Kazikli Bey. His access to up to 30% charge from Vampirism alleviates this issue somewhat, but it still holds him down if he is not properly supported. This also heavily restricts team composition, usually requiring pairing him with allies with Arts and NP Generation buffs or direct NP charge skills. Some Servants that fit his needs include Tamamo-no-Mae, Zhuge Liang, or Nero Claudius (Bride).

Though Vlad has a decent HP stat and a good Defense buff, Vlad is still a Berserker, and especially one without an Evasion or Invincibility skill. Unless his Battle Continuation is up or he has stacked multiple defense buffs from allies, he will almost never survive a Noble Phantasm or a barrage of high damage enemy crits without a large amount of external help. Additionally, even if he revives, he only regains a maximum of 2500 HP (if Battle Continuation is maxed), which may mean he only lives for one more hit afterwards given Berserker defensive disadvantages.

Despite the fact that Kazikli Bey is a strong Noble Phantasm, it suffers from a damage multiplier that is lower than the norm for single-target NPs. This issue was helped by Vlad’s NP Interlude, but his NP damage remains lower than that of other Servants whose single-target NPs received Interludes. Combined with access to only a single steroid from Legend of Dracula, Vlad’s NP damage has low burst damage potential, but instead deals significant damage over time through its constant use in the right Arts teams.

Vlad’s skill order is built around his standard plan of winning fights via repeated usage of his NP. Vampirism thus takes priority early on in order to build NP gauge more easily, and more often. Morph comes next as a solid Defense bonus that is active the majority of the time. However, after Vlad’s second Interlude, Legend of Dracula becomes the top leveling priority to maximize its Attack and Defense buffs, as well as uptime. Lastly, Battle Continuation can be leveled or ignored depending on a Master’s resources, as it does its job fine at base.

Vlad heavily leans on his Noble Phantasm for damage, and generally sees use in Arts teams built around him and his Arts performance. Because of this, his favored CEs include Arts Performance Up, NP Damage, and Starting NP Gauge CEs. If Vlad is getting enough Arts buffs from allies, NP Gain CEs can also greatly help his NP spam capability.

These CEs boost the damage and NP Gain on Vlad’s 2 basic Arts cards and Kazikli Bey. This helps him get to his NP faster, deal more damage with it, and benefit from a higher NP refund. Kaleid Sapphire has a lower Arts buff in exchange for adding some NP Damage for a more damaging single NP, but less NP gain overall.

This is an option which becomes much stronger after Vlad’s second Interlude. Between his own Attack steroid and any Arts buffs he should be receiving from allies in his favored teams, NP Damage CEs provide the maximum amount of multiplicative damage stacking on Kazikli Bey. The Black Grail is the best possible pure damage option. Note that Vlad will need even more help than usual to charge his NP, and the health demerit on Black Grail may be risky for a Berserker to handle.

If Vlad is needed for a short fight, Kaleidoscope will allow for a turn 1 NP with base level Vampirism. The Imaginary Element takes slightly longer, or if MLB requires level 6 Vampirism for an instant NP. Holy Night Supper sacrifices a small amount of immediacy for a higher damage payoff when Kazikli Bey gets used.

Vlad can really up his Kazikli Bey spam with the multiplicative NP generation from these NP Gain CEs and Arts buffs from allies. Magical Girl of Sapphire provides Starting NP Gauge for a faster first NP, whereas Cute Orangette will take a little longer to reach the first NP but hits harder in exchange.

Vlad III was the king of Romania, and a hero. He usually is summoned as a Lancer, but in this Holy Grail War he is a Berserker. An incarnation of the disaster that relentlessly uses the powers of the vampire.

Dracula the vampire. To wipe himself clean
of that disgrace, Vlad III answers his summons as Lancer and fights in the Holy Grail War. However, very rarely, he is summoned as a Berserker. In this case, his reputation conforms to that of "Dracula the vampire."

When summoned as a Berserker, his Noble Phantasm "Legend of Draculia" is active by default. His Madness Enhancement is EX
rank, but he's able to hold a proper conversation. However, unless his Master is quite skilled, Vlad III will someday suck the blood from his Master.

Vampirism: A
Blood sucking. Vlad decreases his victim's HP and increases his HP.
He also has a moderate chance of inflicting Charm (Confusion) on a target.
There is no differentiation between genders for the Charm caused by Vampirism.

[Kazikli Bey]
Rank: C+
NP Type: Anti-Personnel
Emits a "stake" created within his body.
Beyond wood, materials such as bone, muscle, shadow, and hair are also useable.
Can also incorporate materials from within his target's range, and turn it into a stake.

He hates being summoned as a Berserker, but if it was unintentional he will tolerate it. That said, he is unmistakably a king and is always pompous. He never let go of the attitude that he is king and his Master is the subordinate.